Chicago Med closed out Season 3 with not one, not two, but three major cliffhangers, ranging from romantic to professional to life-and-death. 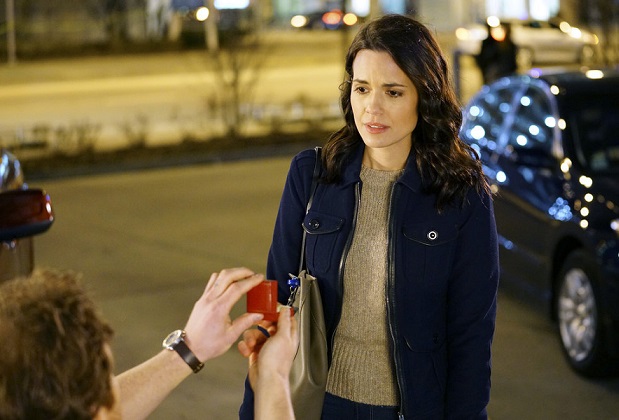 The first arrived after lovebirds Will and Natalie crossed paths with the woman he kissed during their relationship break. Nat put two and two together, and stormed off. But Will wasn’t about to let her slip away again, especially since he was already planning on proposing. He was just waiting for the perfect moment to pop the question — but there’s no such thing as perfect. Chasing after his girlfriend, Will stopped her outside of the hospital and got down on one knee, ring in hand: “I’m not going to let you go — not without asking: Will you marry me?” So will Natalie say yes, erasing any doubt that “Manstead” is meant to be? Or will she reject her beau? (Her face during the proposal didn’t exactly scream “happy,” and we can’t blame her. It was mid-fight.)

Meanwhile, Connor was approached with an offer to work at the Mayo Clinic. Still undecided about the gig, he asked his colleague/sometimes fling Ava if she would take the job, and she replied, “Yes, absolutely.” The adamant response felt like a rejection of her and Connor’s sorta relationship, leaving us to wonder if the surgeon will accept the job not just for the professional opportunity, but also as a way of moving on from his dalliance with Ava.

Rewatch both scenes below, then scroll down to keep reading.

The finale’s life-and-death cliffhanger came during the closing minutes, when Dr. Charles confronted Sarah’s serial-killer dad Bob, who collapsed in the middle of the conversation. Dr. Charles was about to start chest compressions… but then he just stopped as Sarah walked into the room. Is that the end of Bob? And what does it mean for Dr. Charles and his protégé’s relationship?

Rewatch the potentially fatal ending, then cast your votes for what will happen when Med returns for Season 4 on Wednesday, Sept. 26 at 8/7c on NBC.