Things are going very good for The Bold Type couple Adena and Kat. Just look at the big smile on Adena’s face in the above photo from Tuesday’s episode (Freeform, 8/7c). Or take in Kat’s goofy grin as she checks her and her girlfriend’s shared calendar in TVLine’s exclusive sneak peek below.

But Kat’s look of joy turns to concern when Adena rejects the idea of going to a friend’s party. Could there be more to it than Adena just not feeling that scene anymore?

TVLine chatted with Nikohl Boosheri, who plays the lesbian Muslim artist, about her character’s popularity, her “heightened” romance with Kat and the challenges ahead for the couple.

TVLINE | You were promoted to a series regular for Season 2. That’s a real testament to the popularity of your character and the Kat/Adena relationship. Did you expect it to take off and really resonate with fans as much as it has?
No! When you’re doing something so sensitive, there’s a lot of pressure there to get it right, to not offend anyone, to be as sensitive as possible. I didn’t know [if] audiences [were] ready for this kind of character. I think we hoped. We certainly felt really excited and passionate about the relationship and the characters we were portraying. But I didn’t expect such a positive response. It’s just really encouraging that we are on the right track. We could go deeper, and there’s more to do and say where these characters are concerned, but we are on the right track. It feels good. 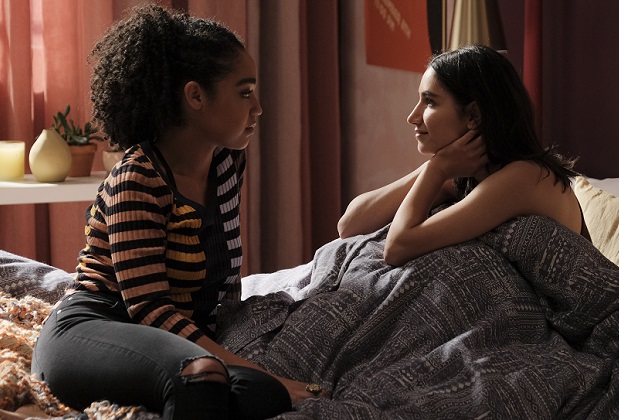 TVLINE | The show went all-in on the Kat/Adena relationship this season. They’ve gone from being interested in each other to living together and being in a pretty serious, committed relationship.
Right?! They move quick. They’re pretty intense. [Laughs] Sometimes we have to remind ourselves, like, “Wait a minute, how long have they been together at this point?” Everything feels so heightened and intense. Sometimes, there just are those people in our lives where it’s very heightened. You’re like magnets to one another, and things don’t necessarily follow a suggested timeline. You always hear like, “You should be together this long before you do this.” It feels like Kat and Adena are very much that couple [where] everything is moving very quickly and very intensely. There’s no point getting in the way of it.

TVLINE | It feels like they’re in the honeymoon period of their relationship. They’re living together, they seem in love… Can this happy period last? Are there potential signs of trouble ahead?
Last year, there was this constant kind of push/pull of, “Can they? Will they? Won’t they? Will they end up together?” Kat had never been in a relationship before, never felt this deeply for anyone, and Adena was still in a relationship. There were immigration issues. Now this year, we get to see them just be in a relationship and deal with the challenges that come with that, that come with getting to know someone better. This is Kat’s first relationship, and I think we’re going to get deeper into what that means for her as a person and what that means for them as a couple. Adena also still doesn’t have a more permanent work visa, so there’s that looming.

Watch an exclusive scene from Tuesday’s episode, then scroll down to keep reading:

TVLINE | This is Kat’s first relationship, and it’s with a woman. Is that a concern for Adena, who’s been with women who were very secure in their sexuality?
I think Adena’s come to terms with her sexuality. There was a line that never made it in there, but she’s known for a very long time, and she’s been open with herself for a very long time. She’s had a community for herself, and for Kat, that’s never existed before. In Episode 4, we see their worlds open up a little. Kat meets Adena’s friends, [her] lesbian community and art-world community. It’s going to be a real learning experience for both of them. Like you said, they’re at different stages in their lives, and it’s going to be really fun for the audience to see them navigate that together.

TVLINE | How does Kat fit into that world? What does she think of Adena’s circle of friends, and vice versa, what do they think of Kat?
[Laughs] We’ll have to wait and see, but I think it’s going to be really exciting for Kat. It’s going to be a really fun episode in some ways. We also see people from Adena’s past, which is always an interesting point in the relationship, when you realize or remember you’re not the only person they’ve ever been with. And we see Kat bumping against that, too.