Tuesday’s Animal Kingdom was a biggie: Not only did we get a clue, if not quite an outright answer, about the identity of the person to whom Mia has been reporting, but J got busted “collecting the rent,” Deran took a new lover, Lena proved she’s a chip off the old block, and Nicky decided that even living in Guam had to be better than playing Hazel to J’s uncles. Oh, and two of the Codys stooped to a low that was so far down there, it had to have scraped against hell. What did they do? Read on…

‘I FEEL S—TY, DON’T YOU?’ | As “Prey” began, in spite of the peepshow that Frankie had put on for Pope, he still wanted her and Billy gone badly enough that he asked J, “Do I need to move back here?” And actually, maybe he did, considering how slippery Billy is. Though Smurf’s ex had arrived at the Codys’ house in a stolen car, he insisted that he was only hanging around to spent some quality time with Deran. It was clear, however, that he was still the same a–hole that Pope remembered. In fact, when he demanded his shorts back, Billy stripped them off, revealing that he was going commando, and before diving into the water, cracked, “You know the best thing about a pool, Pope? You don’t have to take a shower.” Charmed! Meanwhile, Deran was at the bar having some extremely vigorous morning sex with Linc. (Sorry, Adrian.) As sweaty and hot as it was, Deran nonetheless shot down his new playmate when he suggested that they go out. 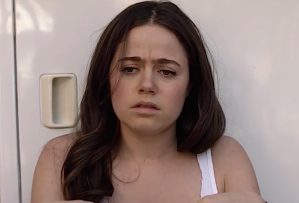 Back at the Codys’, Nicky issued a #sorrynotsorry to J for having sex with that Marine and asked, “What are we to each other?” Unfortunately, he was as likely to answer that question as he was to admit that he was screwing around with Mia. So, while he set off to “collect the rents” — unaware that in addition to the tail he lost, Pearce was keeping an eye on him — Nicky forlornly resumed her maid duties. “This,” she admitted to Mia, of all people, “isn’t how I pictured any of this.” Speaking of Mia, Pope — since he was already having a confrontational kinda day — “offered” her a ride to work, during which he refused to accept that she was a friend of J’s and ordered her to “find someplace else to crash.” And, whereas being fixed with Pope’s steely gaze would have made many a man tremble, the young woman instead reacted as if she was bulletproof. 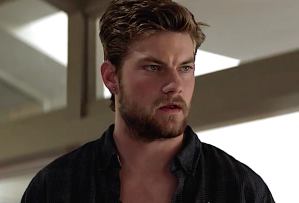 ‘WE PAY UNTIL WE CAN’T’ | At the beach, Craig learned a few things from Carter, whose brother managed to hang 10 despite being paralyzed: 1. Smurf had been sponsoring the siblings’ charity surf tournament for years to the tune of $5k. 2. Since she was behind bars and the Codys were strapped for cash, J had told Carter that he wouldn’t pony up this year. 3. The $5k was a small price to pay… for what, it was not yet entirely clear. (Though given the presence of a paralyzed dude and the biggest screw-up of all the Codys, the math wasn’t that hard.) Off those revelations, Craig hightailed it to the house to see J but instead found Billy, who asked if he could be of assistance. “Yeah,” Craig said. “You got five grand?” Why not just ask Smurf? suggested Billy, laughing upon hearing that Craig hadn’t ever visited his mother. “Even I know that’s a big mistake. Holy s—.” Inside, J was doing the bookkeeping when in came Deran to compete with Craig for the Biggest Screw-Up title. 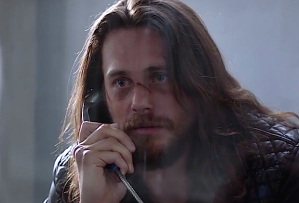 How so? A bar employee Deran had fired had filed for unemployment. Now the barkeep was on the hook for unemployment insurance and penalties. To J’s surprise, Deran was the personification of a dumb blonde. He didn’t even know what a W-2 was! After Nicky called her dad and left a message saying that she wanted to come to Guam, he intercepted her right before she’d quite made it out of Dodge. “Our place here is tight,” Pop said. So wait — “you don’t want me to come?” she replied. And, to her horror, nope. He didn’t. While that was going on, Craig paid a visit to Smurf, who spelled out his culpability in the accident that had paralyzed Carter’s brother. Craig had been so high, he hadn’t known he’d been the driver. And he sure as hell hadn’t known about the bills that followed. So for how long would they have to pay Carter? he asked. “Can his brother walk?” Smurf shot back. Before their conversation was through, Craig bemoaned the fact that she’d given J all the power. “What,” she responded, “makes you think J’s in charge?” 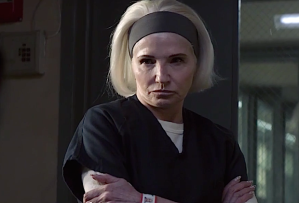 ‘HEY, THE MUMMY RISES’ | When J visited Smurf, she put three items on his to-do list: pay Carter, evict Billy, “and you, my friend, need to be much more aware of your surroundings when you’re collecting your rents.” When J protested that he’d been careful, she replied, “Not careful enough!” Now he would have to go to every tenant to make sure they understood their (cough) rental agreement. Back at Deran’s bar, Billy actually managed to make some inroads with his son by talking a bit about his own lousy dad and the mistake he’d made by wanting Smurf more than she’d wanted him. His takeaway from that experience: “Date lotsa chicks,man.” When Deran quickly replied, “Im gay,” Billy just said, “Then lotsa dudes.” He was so unfazed that he suggested he himself was a “hetero bottom, ’cause I like to be told what to do… or maybe I’m just lazy.” Before he was done, he even put it in Deran’s head that he should be in charge instead of J. 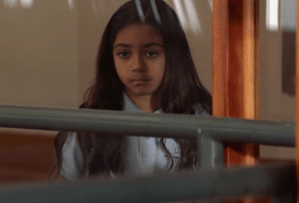 Determined to figure out the deal with Mia, Pope visited Tina Trujillo in prison and asked why the girl had been planted at the Codys’. Weren’t they getting paid on the regular to protect Smurf? Oh, Mia didn’t work for Tina, said the jailbird, adding, “If she is there, you best watch out. That chica’s dangerous.” Speaking of dangerous, Lena expressed her displeasure with her new school by cutting off a classmate’s ponytail. Called before a counselor, Pope had to admit that the little girl wasn’t getting any kind of therapy to deal with the loss of both of her parents. Afterwards, he freaked out on his charge. “I don’t know what I’m doing wrong,” he cried. “I can’t do this by myself. I need your help.” Meanwhile, J discovered that a sweet little old lady tenant, Mrs. F, had dementia and couldn’t keep to herself the fact that she only paid $175 in rent. His solution to the problem? 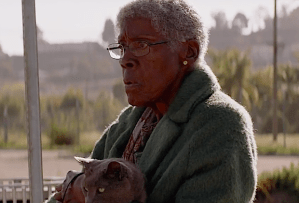 ‘YOU WANNA SHOOT HER?’ | Go to Deran, of all people. From there, the two committed what has to be one of their vilest acts yet. Just when I was starting to sometimes feel for the Codys, J and Deran drove Mrs. F — and her feline companion — to a bench who knows where, took her ID and even the cat’s collar, and left them there. Vile. Later, Craig paid Carter the $5k, and Nicky returned to the Codys’ to find Billy shooting heroin in the living room. One look at how despondent she was, and he gestured for her to join him on the couch. When J got home, Pope wanted to get one thing straight: “I don’t want Smurf to die in jail. She’s family,” he said. “If I want her dead, I’ll do it myself.” As the episode drew to a close, J declined a call from his grandmother, and Mia passed through the kitchen, catching Billy’s eye out at the pool. The look they exchanged was so long that it made me think that he was the person with whom she’d been sharing all of the intel she’d gotten about the Codys.

What do you think? Are Mia and Billy in cahoots? Is an OD in Nicky’s future? And how soulless did J and Deran have to be to dump poor Mrs. F in the middle of nowhere? Hit the comments with your theories, predictions and reactions.