All the elements are in place for Sharp Objects to be your next TV obsession. It’s based on a novel by Gone Girl author Gillian Flynn (great!), it stars Amy Adams (love her!) and it’s directed by Big Little Lies helmer Jean-Marc Vallée (sign me up!). So why does the end product feel so disappointing? Despite that top-shelf pedigree and some fantastic performances, the HBO miniseries — debuting Sunday, July 8 at 9/8c — is frustratingly opaque, and it moves like molasses. It’s such a slow burn, it nearly fizzles out.

Adams plays big-city crime reporter Camille Preaker, who’s sent back to her dusty hometown of Wind Gap, Missouri after one young girl there is murdered and another goes missing. Camille made it out of Wind Gap, but she doesn’t exactly have it all together: She lives on a steady diet of tiny vodka bottles and candy bars, she harbors some very dark sexual impulses and we learn later that she’s a cutter, carving words into her forearms to relieve stress. It’s not just the case that’s stressing her out, either. The return home unleashes a flood of once-buried memories, as Camille is haunted by fragments and flashes of her own family tragedy. 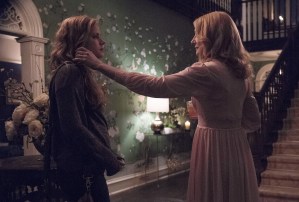 The whole town of Wind Gap is haunted, it seems: thick with atmosphere, with ghosts of past sins inhabiting every corner and doorway, and a sense that grave danger is lurking just out of frame. While Camille works on her story, she finds herself living at home again, acting out an encore of her unhappy childhood with her stiffly formal mother Adora (Patricia Clarkson), who doesn’t want any of that “morbid” murder talk in her sprawling mansion. (When Camille tries to take notes at a girl’s funeral, Adora snatches the pen right out of her hand.) And the friendly townsfolk aren’t as friendly as they seem: “When someone says, ‘Bless your heart,'” Camille warns, “they really mean, ‘F—k you.'”

It’s all moody and evocative enough to play like a new season of True Detective — although it has more in common with the inferior Season 2, sadly. The tone is oppressively grim and humorless, and the writing is a jumble of crime-drama clichés: the willfully clueless local police chief (“My town, my case”) who’s only there to get in the way; the out-of-town detective who nobody trusts; the gossiping, wine-guzzling moms; the sketchy suspects who turn out to be red herrings. It’s a depressingly familiar set-up, and (even worse) told at a snail’s pace. Flynn’s novel is just 254 pages long, but the miniseries stretches it out to a full eight hours (of which I’ve seen four), so the narrative ends up lagging noticeably at times, meandering to the point of feeling repetitive. 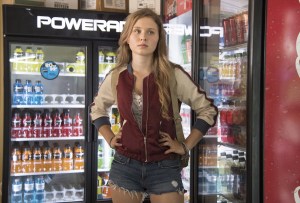 Adams is a terrific actress, and this role gives her a chance to scuff up her squeaky-clean image a bit, but Camille is so closed-off and defensive, it’s hard to connect with her as a character. (Most of the characters are emotionally numb, actually, as if Wind Gap’s water supply has been spiked with mood stabilizers.) The supporting cast is filled with great little turns, though. Clarkson is fascinatingly brittle as Adora, her every action tinged with an unspoken sadness, and Eliza Scanlan delivers a breakout performance as Camille’s chameleon-like half-sister Amma, who’s a prim and proper dress-up doll for her mom at home and then roller-skates provocatively around town in short-shorts like a modern-day Lolita. That tangled trio is actually Sharp Objects‘ strongest asset, highlighting the contrast between “perfect” little girls and the complicated, messy women they end up becoming.

Vallée masterfully chronicled the lives of complicated, messy women in Big Little Lies; he has a keen eye for distinctive details that tell a story, and paints a vivid portrait here of the lazy rhythms of small-town life. But since Sharp Objects‘ central mystery generates so little dramatic heat, those tiny details are really all we have left to chew on. Now that’s not necessarily a fatal flaw — I didn’t particularly care who killed who in Big Little Lies, either — but only if the characters and emotional conflicts are compelling enough to overcome that. And here, unfortunately, I’m not sure they are.

There’s enough intriguing material in Sharp Objects to keep me watching until the end; at the very least, it’s still an artfully shot showcase for some fine acting, which isn’t the worst thing in the world. But considering the big names involved and the promising source material, it can’t help but feel like a letdown.

THE TVLINE BOTTOM LINE: HBO’s Sharp Objects boasts a great pedigree, but is hampered by a sluggish narrative and a stiflingly moody tone.