For the heroes of CBS’ Salvation, that incoming asteroid ain’t looking so bad after all, given the new turmoil and threat of civil war that’s brewing as Season 2 gets underway this Monday at 9/8c.

When last we tuned in, the hacker collective RE/SYST had taken advantage of United States/Russia tensions stemming from a previous, weaponized asteroid, to seize control of missile systems and launch a nuclear attack on America. Grace, Harris, Jillian and others scrambled for cover in Tanz Industries’ air-gapped bunker — where they might be holed up for 30 days! — while Darius and Liam stayed above ground to brainstorm a new solution to rerouting the incoming asteroid.

TVLINE | For starters, does Season 2 pick up pretty much right where we left off, or has some time passed?
It basically picks up within minutes of where it left off. In fact, there’s a funny little part of a scene where people are already freaking out, just 10 minutes later, because nobody gets phone reception. I think that was probably the most realistic thing!

TVLINE | Outside of the cell service freak out, are things honky dory with everybody congregated there in the bunker?
No, because it all happened so quickly that only half, let’s say, of the people that they selected [for the Ark] even made it to the bunker. The rest were Tanz workers, and so there are a lot of people in there that they did not vet. And there are a lot of people in there that didn’t expect to all of a sudden be locked underground in a bunker. So, you have this sense of fear and chaos, while Grace and Harris (played by Hawaii Five-0′s Ian Anthony Dale) try to keep everyone calm and collected and orderly. 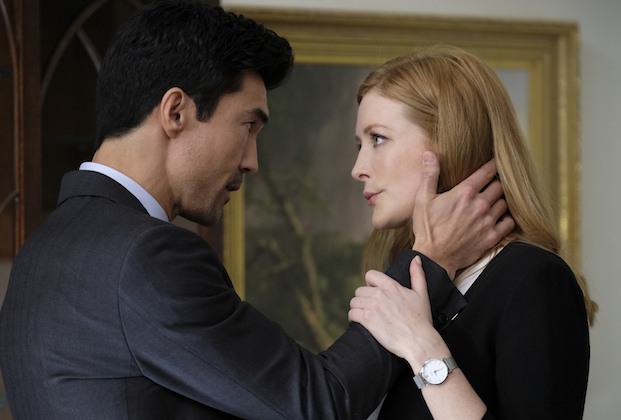 TVLINE | They kind of fall into the “mom and dad” roles, to the little community there?
They do. They’re able to rally the troops initially, but then, as things happen on Salvation, things get really crazy, really fast.

TVLINE | On top of all this, it wasn’t too long ago that Grace gunned down dirty Chief of Staff Claire Rayburn (Erica Luttrell). How is that weighing on her?
That’s actually something that I’ve really appreciated about the show. So often, being a TV watcher, somebody gets killed and the next day everybody’s over it and we move on. But it hasn’t worked like that on this show. We see that Grace is really haunted, she’s got some major demons right now. She can’t quite let go of the guilt and the burden of what she did, even though it was fully in self-defense, protecting Harris, but….

TVLINE | It’s quite a thing to end a life.
Exactly, and Grace isn’t FBI, she’s not a cop, she’s not a soldier….

TVLINE | She’s just a speechwriter, damn it.
[Laughs] She simply works for the president (Tovah Feldshuh), you know? So, I feel like if it weighs on her the same way it would weigh on, like, you and I. And I’ve always felt like Grace has represented the audience. She’s always been sort of the moral center of the show, and so it makes sense — and I really appreciate the fact — that she is haunted by what she did. 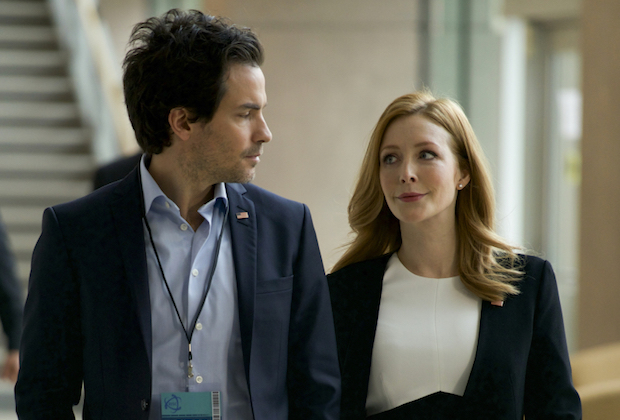 TVLINE | I don’t think it’s a spoiler to say that Grace will see Darius (Santiago Cabrera) again. How would you describe the dynamic once that happens? Because the last they saw each other, you know… things were said.
Yes, things were said. You will see that real life smacks Darius in the face very quickly, and a big change happens for him, and it puts the two of them in a place where they may have to take a step back and reevaluate. The elements are keeping them apart yet again.

TVLINE | Meanwhile, Taylor Cole (The Originals) is now recurring as Fiona, the bartender Harris hooked up with last season, which seems a bit… random. Should we be wary of her presence in the bunker?
Well, nothing is random on Salvation. There are so many little rules, such as “nobody really dies,” and “nothing’s really random,” so no, that’s no coincidence that she’s there. I think it’s fairly suspicious, and Grace catches it right away, but Harris obviously has a different [ahem] relationship with her. He’s still stuck on the rendezvous they had in the bar. 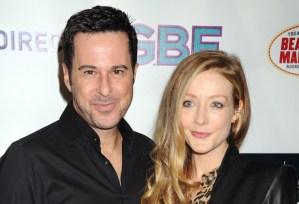 TVLINE | Your husband Jonny [Silverman] is coming on as a new character. Do you get to have scenes with him?
Jonny is recurring as a lawyer named Roland Kavanaugh, who is so obnoxious. In fact, that has incorporated itself into our personal life. Whenever Jonny does something slightly annoying, I’m always like, “Oh, that was so Roland.” He’s this obnoxious, pocket-square wearing, White House Counsel.

TVLINE | I was going to ask if he was a little dorky.
He’s completely dorky. He always introduces himself as “Roland Kavanaugh, White House Counsel.” In the episode we just shot, the screen direction went something like “… leaving Roland Kavanaugh alone in Weenieville.” But going back to your question, yes, we do have scenes together, and we’re usually annoyed with each other, so it’s fabulous.

TVLINE | All told, how would you compare Season 2 to Season 1?
Well, Season 1 was very much about the impending asteroid, with the question almost being, “Are we going to kill ourselves before the asteroid even gets here?” But in Season 2, the truth is out, and so it’s a matter of, “Can the world handle the truth? How does the world deal with the truth? And will it bring out the best of us, or will it bring out the worst in us?”

TVLINE | Would you say Season 2 is even a little crazier?
I would say that Season 2 is way crazier than Season 1. I mean, this season gets very, surprisingly political, and I think that’s what fans will be surprised about. It deals with coups, attempted coups, the inner workings of the government, and almost borderline civil war. There’s this looming threat of extinction, so everything is elevated.

TVLINE | When we spoke last season, you joked about how often a character had to say, “We have to save the world!” And here in the Season 2 premiere, there are lines like, “Listen, I know you were all excited about going to Mars…,” or, “I wasn’t planning on becoming vice president!”
The drinking game this year is every time someone says, “Now!” So let everyone know that, because they’re going to be really hammered by the end of every episode. I would say four to five scenes in every episode end with, “Now!”

TVLINE | To be fair, there are just 120 days or so until the asteroid hits.
Exactly.

Want more scoop on Salvation, or for any other show? Email InsideLine@tvline.com and your question may be answered via Matt’s Inside Line.