Betty Buckley… is… everything. Within moments of her first appearance in the Season 3 premiere of Preacher, the Tony winner told us all that we needed to know about Jesse’s infamous grandma, Marie L’Angell, and ratcheted up the series’ always-high level of bats— into the stratosphere. In other words, she slayed. Which was ironic, considering that “Angelville” began with Jesse and Cassidy arriving at the titular plantation in hopes of convincing her character to save Tulip from pushing up daisies. Did Madame L’Angell’s voodoo do the trick? As if you don’t already know, read on…

‘WEEBLE WOBBLE, BUT HE DOES FALL DOWN’ | Opening “years ago” at Angelville — aka “the place which burrows into your heart and will not seem to leave” — the episode immediately gave us a sense of both the power and the price of Madame L’Angell’s black magic: On one hand, we saw her cure a councilman of his urge to drink; on the other, a fellow who looked like a hobo begged Jesse’s mom Christina to return “it” until he was whacked by hired hand T.C. and “put back with the others” out of sight. Later, another henchman — Jody, the one who legend has it murdered Jesse’s father — caught Christina hiding something in her room. After she tried to make a run for it and was brutally returned to Angelville by Tweedle Scum and Tweedle Scummier, her mother demanded to know what it was. “Wouldn’t you like to know, you crazy bitch?” spat Christina before eating what turned out to be a photo of baby Jesse. Unfortunately, though Madame L’Angell proclaimed to love her daughter more than anything, she did want to know — so badly that she sliced open Christina and pulled the picture out of her! While Christina screamed, “Don’t you touch my Jesse,” her mother gave the order to “strap her in the machine.” (And you gotta give the show credit for the way it makes vague wording like “back with the others,” “the machine” and even “it” creeptacular.) 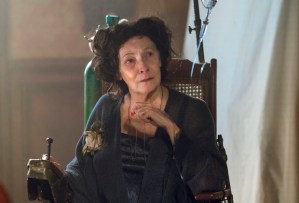 ‘LOOK WHAT THE CAT COUGHED UP’ | In present-day, when Jesse and Cassidy found the former’s family home apparently deserted, the vampire lit into his estranged pal anew for letting Tulip die. So ticked that he had no f—s left to give, Cassidy even went so far as to confess that he and the deceased had hooked up — before she was deceased, of course. The estranged buddies’ ensuing brawl was only put on pause when they were interrupted by T.C. and a wheelchair-bound Miss Marie, the embodiment of hell on wheels. Time being of the essence, Jesse quickly explained why they’d come, and in response, his grandma… rolled into the kitchen for a snack. As far as helping him went, she was — how to put this — not eager. “A betrayer, a boy who leaves his family to struggle and rot,” she hissed. “For him, I don’t need to help s—.” But since Jesse would do anything to save Tulip — and, as his grandma noted, “That’s a big word… anything” — she reminded him that he knew what she wanted. We didn’t know, mind you. Nor were either of them thoughtful enough to spell it out for us. However, it appeared to involve Jesse slicing open his hand and letting his blood drip on a napkin, which his grandma then drew into her lap. 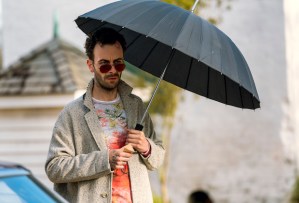 ‘WHY CAN’T I DO ONE RIGHT THING?’ | A deal struck, Madame L’Angell sent Jesse to ask Jody where he could get some trance boil (at least I think that’s what they kept calling it). At the same time, Cassidy was to collect all the items on Jesse’s list of Tulip’s favorite things to entice her to return to the land of the living. But Jesse had her favorite music wrong, the besotted vampire protested. Joni Mitchell is her favorite. There was no time to argue, though. At that very moment, the woman they both loved was in purgatory. “Death’ll come to the door,” Madame L’Angell explained, “and when she answers, she’ll be gone for good.” So, off Jesse and Cassidy went. Finding Jody gutting an alligator, Jesse greeted him with “You’re probably still pissed.” Which, honestly, is probably the way he should greet most people he’s ever known. Taking in Jesse’s preacher garb, Jody replied, “You could dress up like your daddy all you want, kid, but you’ll never look more like your mama than you do right now” and pulled him into a hug. (So… not exactly the interaction I expected between Jesse and his pop’s killer.) 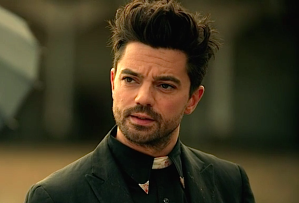 ‘THE MORE IT HURTS, THE MORE IT HELPS’ | While Jesse and Jody went to the Boyds’ to obtain trance boil — an idea so bad that shots were fired before the mission was completed — Cassidy went on his scavenger hunt and returned to find Madame L’Angell chewing on a scorpion pepper above Tulip’s body. “If the spirit senses your pain,” she explained, sometimes “it’ll come back to ease it.” Have one, she told Cassidy. “Maybe she’ll come back for yours.” From there, she spun a most manipulative yarn, about how once she’d loved someone who hadn’t loved her back — not until she’d cast a spell. Then he’d loved her day after day “until I killed him.” And she was so grateful to Cassidy for bringing Jesse home that if there was anything he ever wanted in return, all he had to do was ask. Meanwhile, Jesse and Jody returned. But before they entered the house — before Jody’d even hand over the trance boil — he wanted to fight. “Is today the day you finally beat me?” he asked Jesse. “For your lady love’s sake, I sure hope so.” Suffice it to say, this was not the day that Jesse beat Jody. As a matter of fact, had Miss Marie not intervened, Jody would have dropped a pickup on Jesse. (Does that mean he has superpowers or something?) 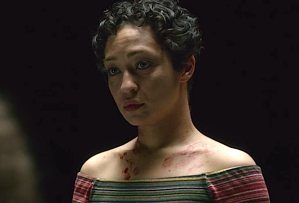 ‘WELCOME HOME, JESSE’ | In purgatory, Tulip hung with a younger version of herself and relived her father’s thwarted attempt to go straight. When at last there came a knock at the door from the Department of Family and Protective Services — a stand-in for death — our heroine reassured her younger self that it wouldn’t be any worse than her home life. But before opening the door, she noticed that the coffee table was now covered with her favorite things. Young Tulip was even chowing down on a bowl of Boo-Berry! Between the tempting offerings, Jesse’s proclamation that he needed his girlfriend back because “Who am I gonna rob a store with except for you?” and Cassidy’s putting on Joni Mitchell, Tulip was drawn back to the other side. Before waking up in her body, though, she met our dog-suited God, who told her that he was counting on her to help him fulfill his great design. (Mmkaaay… ) That night, as Tulip rested up after her ordeal, Jesse couldn’t help but picture Cassidy lying next to her in the bed. Calming himself with a whiskey, he was approached by his grandma, who was eager for reassurance that they had a deal. “Yeah,” he said. “Or I could cheat and change my mind, kill you like I shoulda done years ago. Wouldn’t take much. Push you over, you’d be dead before you hit the ground.” Her chilling response: “Push me. See what happens.” Rather than do that, Jesse agreed to honor their mysterious deal, at which point she reminded him — and this was even more chilling than her “Push me” — that she loved him more than anything. Just like she had his mother.

So, I can’t be the only one obsessed with the villainess that Betty Buckley is creating here, right? And how many of you are now Team Cassidy instead of Team Jesse in the battle for Tulip? Hit the comments after grading the episode.