Nickelodeon’s fans from the ’80s are all grown up, but the kid-centric network hasn’t forgotten about them.

The network, know for its youth-friendly game shows of the 1980s and ’90s, is bringing back one of its classic hits: Double Dare. 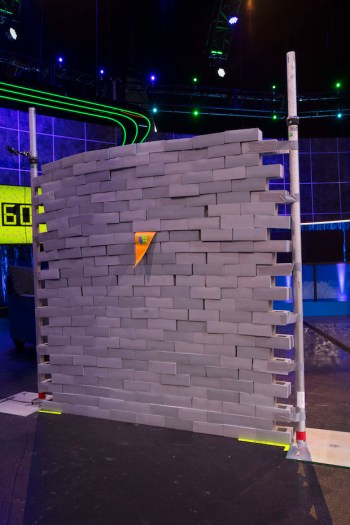 Double Dare originally aired from 1986 – 1993 (and had a quick revival in 2000 that lasted less than a year). The show pitted two groups of contestants against each other in a trivia battle where one team could dare the other team to answer the proposed question or make them participate in slimy physical challenges. The winner of that round would move on to the obstacle course, a grab-bag of eight wacky and slime-filled challenges that the contestants had to complete in 60 seconds.

Now, the show is back, and it’s bringing the slime with it.

“I’m just excited to be a part of it in so many different ways. It was a show that was critical to my career and also critical to Nickelodeon,” said Marc Summers, host of the original series, ahead of the June 25 premiere. “To be able to reunite after all these years is just fun.”

The revival will have many hallmarks of the original, including the team trivia, the dare-double dare-physical challenge format and the signature, slime-tastic obstacle course. Since the show aired 30 years ago, Summers said he is excited for his now-grown-up fans to indulge in the nostalgia while also sharing their childhood experience with their own kids. 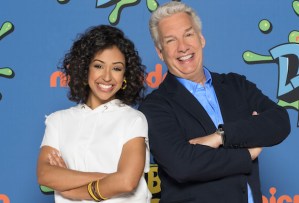 “What we have now is a situation where — maybe for the first time in Nickelodeon’s history — parents who grew up watching Nickelodeon programming have kids the same age they were when they started watching Nickelodeon,” he told TVLine. “And I think it is a bonding and sharing experience.”

Of course, not everything will remain the same. Liza Koshy (pictured at right), a YouTube comedian with nearly 15 million subscribers, will step into Summers’ shoes and serve as host of the revival. Summers will offer color commentary on the physical challenges and serve as executive producer.

“It’s an interesting combination, because there are grown ups who want to see Marc Summers and then they have kids who have no idea who Marc Summers is, unless maybe they watched Unwrapped or something,” said Summers, referring to the Food Network show he hosted from 2001 to 2011. “It’s a whole different flavor. If you are tuning in to see what Double Dare was, it’s not that. It’s something different. It’s something for 2018.”

This balance of old and new is best displayed in the Double Dare obstacle course. Returning challenges include fan favorite Pick It, where the contestants must stick their hands up a giant nose and find the flag, as well as The Wringer, The Tank and Down the Hatch (or Big Mouth as it is known by the Double Dare 2000 crew). They will be joined by newcomers Overstuffed, a giant bear waiting to be unstuffed, Tube-A-Totter, a Plexiglas tube filled with slime, and Couch Surfing, a dirty couch with a flag hidden within its crevices.

“It’s bigger. It’s louder. The obstacle course may be about 20 percent bigger than it was back in the day. It’s a mixture of old and new,” Summers said.

Double Dare will premiere Monday, June 25, at 8/7c. Check out the gallery above — or click here for direct access — to see which obstacles will bring the slime!