That’s what Westworld‘s hosts might say if they heard Ramin Djawadi’s soundtrack for the HBO series. But to fans, the sci-fi drama’s musical cues should sound awfully familiar. 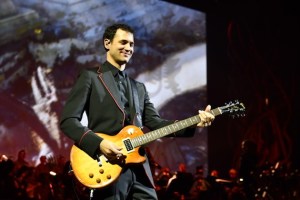 Know for its haunting sounds and western flare, Djawadi’s score evokes a sense of mystery while balancing the Western and electric elements of the series — and then there are those covers. In Season 1, show composer Djawadi (shown at right, who also is in charge of the music for Game of Thrones) covered many famous tracks from various artists, giving them a Western spin to match the android-filled park. In Season 2, with the introductions of The Raj and Shogunworld, he got to have some more fun with some classic hits, allowing the new parks’ themes to influence a new set of covers.

Just after returning from the European leg of Thrones‘ concert tour — which will continue in North America starting September 5 — and ahead of Westworld‘s 90-minute season finale Sunday (9/8c), TVLine picked Djawadi’s brain about four of the series’ biggest musical moments.

‘SEVEN NATION ARMY’ | The series did not spend much time in The Raj, but this Indian-themed cover of the hit White Stripes song made it oh-so memorable — that, and the fact that it shows up in Episode 3, as we met Emily. “The next scene after that is when I start to plant thematic material for her as a new characterm and it is kind of related to the Man in Black theme, but describes in a way that you don’t necessarily recognize it,” said Djawadi.

‘PAINT IT BLACK’ | Used in Season 1 in the bank-robbery scene in Westworld’s Sweetwater, Djawadi updated the Rolling Stones cut to match its new setting: Shogunworld. “The reason we chose the same song was to show the parallel world and parallel actions,” said Djawadi. “We thought it was the perfect idea to then choose the same song, but in the style of the other world it is in. I took out most of the Western solo instruments and replaced it with shakuhachi and taiko drums and things like that to give it that ethnic spin.”

‘HEART-SHAPED BOX’ | This Nirvana song actually has two Westworld versions: one used in a trailer and one used in Season 2, Episode 8 while Akecheta wandered around the park’s underground control area. “Before I do the orchestral arrangement, I do the piano version itself. The piano version is very emotional,” said Djawadi. “So I feel that is was the perfect fit for this heartbreaking scene. It’s this eye-opening moment when he sees not only his love but also all of his other friends, these replacements, going on. He learns how life was not how it was presented to them. That’s why we felt the piano arrangement was perfect.”

WESTWORLD OPENING THEME | Of course, the most iconic track from the show is the chilling and mysterious opening theme. “One of the main things that Jonah [Nolan] and I had discussed was that he wanted some sense of assembly,” Djawadi explained. “You also see in the visual how the robots are being assembled, and he wanted the same with the music… We start off very small ,and we just have this little violin and then the cello. [Then] the piano comes in and more and more instruments enter. Obviously, mood-wise, we just have a bit of that mystery and — there are so many terms I could use to describe the overall show — I guess the danger, the adventure. All of that is supposed to be captured in the minute-forty-five.”