Thursday’s series premieres introduces us to a gender-swapped version of Rick Castle and Kate Beckett: Cibrian plays lone-wolf private investigator Eddie Valetik, who finds himself stuck with an unconventional (and uncontrollable) partner in Bilson’s Sam Swift, an actress fresh out of rehab. (She lost it when her boyfriend dumped her on the red carpet the same day that her show was cancelled.) Sam is desperate to get back to work, so when she finds a potential comeback role in a movie about a P.I., she starts shadowing Eddie, who’s not happy about having to “babysit a spoiled, over-privileged, out-of-control ego.” 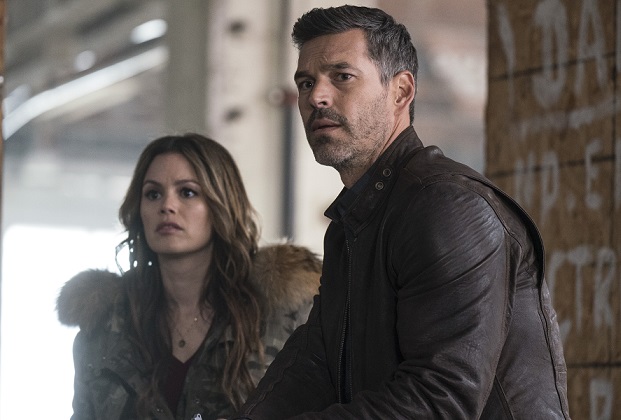 Except Sam is anything but. Sure, she ignores Eddie’s instructions not to say or do anything while on a case, but that’s actually a good thing. As it turns out, Sam’s years of playing a TV cop on Hot Suspect and her actorly knowledge of body language make her a pretty good novice P.I. After the pair successfully take down a crime boss and make headlines, clients start requesting Eddie — and Sam.

Thus, a new professional partnership is born, as well as a “will they, won’t they” couple. While Eddie seems to have some kind of casual hook-up relationship with Detective Christine Rollins (Rookie Blue‘s Aliyah O’Brien), he and Sam clearly begrudgingly respect each other and are more alike than they would care to admit. “You’re just like me, Eddie. You need a shot at redemption,” Sam says after she confronts him about a case that went wrong three years ago. Their banter needs some work, though. (When they get stuck in a closet together, Sam mistakes Eddie’s gun for… excitement. #ClichesThatNeedToEnd)

Speaking of fans… I love Bilson as much as the next Hart of Dixie and O.C. viewer, and I’m always in the market for a fun, easy-going summer show, but I need Take Two to be 90 percent more witty and 90 percent less by-the-numbers.

What did you think of Take Two? Grade it via the poll below, then hit the comments to back up your pick!