Warning: The following contains spoilers from the Season 4 premiere of The Affair.

Remember The Affair? It’s been a year-and-a-half since its polarizing third season drew to a close. Now the show is back, and introducing a new mystery.

The premiere begins in Montauk. Noah’s using a gas station payphone. He hangs up, then walks out towards Cole. He says, “It’s been 72 hours, and she hasn’t called to check in on Joanie. No one’s seen her. The police have declared a missing person.” We assume he’s referring to Alison, but that’d be too easy… right? Cole appears distressed, but his reaction is ultimately mute. The men then get back into a car and drive off. End scene.

PART ONE: NOAH | It’s six weeks earlier. Noah, our resident garbage person, has moved out to Los Angeles to be closer to Helen and the kids, who recently relocated with Vik. Noah’s struggling to reconnect with Trevor and Stacy, who, let’s face it, have pretty much grown up without him. He arrives late to one of Trevor’s school functions, then is blocked from going in because Helen hasn’t put his name on some sort of list. From his perspective, she’s purposely keeping him from his kids. He waits outside in the parking lot until Trevor exits with Helen, Vik and Stacey, then joins them for dinner. Vik insists! 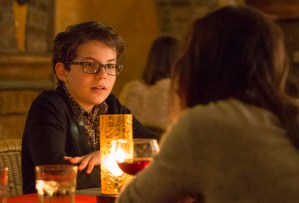 At the restaurant, Noah tries to strike up a conversation. He tells the kids he just set up a trampoline at his new house, and perhaps they can sleep over sometime. Stacey responds by telling her dad that she’ll come over, but won’t spend the night because — and I quote — “Topanga Canyon is creepy.” Apparently Helen told her daughter that Charles Manson lived there once. ¯\_(ツ)_/¯ Noah then asks Trevor about his school project. It’s centered on gay rights, from the perspective of Fun Home. Helen clearly thinks Trevor’s gay, and tells Noah that he’s been spending all his time with a boy named Brooklyn. She then assures Trevor that they’ll love and accept him no matter what, which from Noah’s perspective, seems like her way of trying to coerce their son into coming out of the closet.

We also learn more about Noah’s work life. He’s now employed as an English teacher at a charter school in Compton. We stay with him through a particularly difficult lesson, during which none of his students want to participate. One pupil in particular, Anton (The Fosters‘ Christopher Meyer), seems to have tuned the class out entirely by the time Noah encourages him to read aloud a passage from Animal Farm. This triggers the student, who gets up from his desk and slaps the book out of Noah’s hand. That’s when Principal Janelle Wilson (Shots Fired‘s Sanaa Lathan) walks in, whose very presence puts an end to any potential conflict — at least for now.

Noah eventually discovers that Anton is repeating his senior year. He was held back by Wilson after it was discovered that he plagiarized an essay. This in turn leads Noah to believe that Anton’s next assignment is also someone else’s work. He confronts the teen after class, who ultimately proves that he knows his stuff. Noah follows him out into the hall and attempts to apologize, but Anton tells him to f—k off. He then heads out to meet his ride (played by Grimm’s Russell Hornsby). 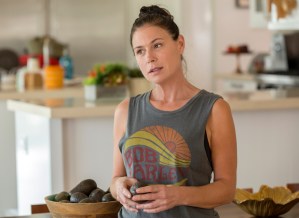 PART TWO: HELEN | Helen, meanwhile, is struggling to adjust to life in Los Angeles, despite living in the sort of house that would make the characters on Big Little Lies jealous. She’s riddled with anxiety — so much so that she keeps imagining earthquakes everywhere she goes, the first of which happens as she’s making the kids’ school lunches. She tells her therapist (Family Ties’ Michael Gross) about the tremors, and he asks if she’s getting used to L.A. She says it’s getting better, but something about the city makes her feel unsafe. The doctor tries to get to the root cause of her tremors, and suggests they might be the result of repressed trauma. When she asks, “What trauma?,” he fires off a list of events from the first three seasons, including, but not limited to: Noah’s affair with Alison; Noah hitting Scotty Lockhart with his car, then going to prison for three years; Martin flunking out of two high schools before barely graduating; and Whitney dropping out of college to run off to Paris with abusive ex-boyfriend Furkat. Helen insists she’s left all of that behind her, then updates us on Martin and Whitney’s whereabouts: The former is enrolled at William and Mary, while the latter is back in school with an age-appropriate boyfriend.

When Helen returns home, she finds Vik’s mother Priya (The Big Sick’s Zenobia Shroff) in her kitchen. Not only has she taken it upon herself to come and tailor Vik’s pants, but she’s also come with a week’s worth of food. She says Vik’s too skinny and doesn’t like Helen’s food, then implies that he’ll never be happy unless he has children of his own. Rather than argue, Helen takes a glass of wine into the washroom and draws herself a bath. There, she experiences another tremor, which she realizes is not real when she sets her wine glass at the edge of the tub.

Afterwards, Helen wanders into the dining room, where new neighbor Sierra (American Gods’ Emily Browning) enters from the patio. She comes bearing gifts (a basket of freshly picked avocados) and tries to strike up a friendship, inviting Helen to join her for goat yoga sometime. (Yes, really.) We then cut to Trevor’s school function, where Helen and Vik spot Trevor and Brooklyn, then have a chat with his teacher, who not-so-subtly implies that the administration is accepting of Trevor’s sexuality. 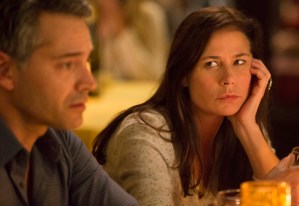 Outside, we relive the scene where Noah first reunites with Helen and the kids in the parking lot. From her perspective, Noah’s furious, dropping F-bombs and blaming her for how little he’s seen Trevor or Stacey. Vik puts a stop to their confrontation before Trevor and Stacey emerge, then everyone heads to dinner. This time around, we visit Vik, Helen, Trevor and Stacey at the table before Noah’s arrival, and Trevor is thisclose to coming out on his own. He stops himself as soon as Noah shows up, seemingly intimidated by his father’s presence. Helen takes Noah aside to talk to him, and tells him that Trevor was about to say that he’s gay. She then experiences another tremor, and insists that Noah is the reason for her anxiety. She agrees she can’t keep him from seeing the kids, but thinks she should see less of him. This gives her a state of peace.

Back at home, Helen and Vik are getting ready for bed. As he’s washing up, she suggests that they take a trip to Big Sur for the weekend — just the two of them. When she returns to the bathroom, she finds that Vik has collapsed.

What did you think of The Affair Season 4 premiere? Grade it via the following poll, then drop your thoughts in a comment below.