12 Monkeys showrunner Terry Matalas has three words to sum up the show’s fourth and final season (premiering this Friday at 8/7c on Syfy): “epic, emotional and satisfying.”

“I’m excited for [viewers] to see how we wrap it up,” Matalas adds. “The two-hour finale is like a summer blockbuster. It’s like a giant movie. We’re going out with a bang.”

TVLine invited Matalas to preview the drama’s closing time-travel adventure, Cassie and Cole’s future, and much more. Plus: Watch an exclusive premiere video below, in which a member of the team… dies?!

TVLINE | You knew in advance that this would be the last season. How did that shape the story? Did you have a list of questions and things you wanted to get to and address?
No, we kind of knew we would get a fourth season at about the [show’s] midpoint. So from the moment we started Season 3, we started to plan. There’s a scene from close to the end of Season 4 in the season opener of Season 3, with the two Coles. So we had to know exactly what that Cole was going to say and where he was. We had 20 episodes to just do it right and plan it, set up everything and organically pay everything off. So it was a gift.

TVLINE | Where does the new season pick up, and what are each of the characters dealing with?
It picks up just moments after Season 3. Cole and Cassie are grappling with their confrontation with the true Witness, Olivia, [and] the loss of their son Athan. They’re kind of about to lose the war. Jones is wounded. The splinter suit is destroyed and broken. Deacon has his heart with his friends, but is not sure if everybody’s on the right side. And Jones, when we left, she put a bullet in somebody she thought was The Witness, and she was wrong. Everybody’s at a crossroads, about to get on this roller coaster for the rest of the season.

Watch an exclusive sneak peek of Cassie hesitating to save [Spoiler]’s life, then scroll down to read more.

TVLINE | How are Cassie and Cole coping in the aftermath of Athan’s death? That’s a very big loss for them.
Cassie’s starting to feel really defeated with Cole. Cole’s drive is colder and harder than ever. They both always have a different, unique perspective on this war, and they don’t always agree. Cole is more driven than ever to put an end to this, but Cassie might think that it’s a bit futile.

TVLINE | You dropped a little teaser at the end of Season 3 with the story about a weapon and a serpent that Cole’s mother wrote. How does that play into Season 4?
It’s a huge part of Season 4 in that, thematically, that story leans into the problem of… time travel, and the fact that this war has gone on so long, our heroes and our enemies are tied together in these loops. How do you untangle yourself? How do you break the cycle? That story is a suggestion on how they might do that, and it seems to be tied to Cole. 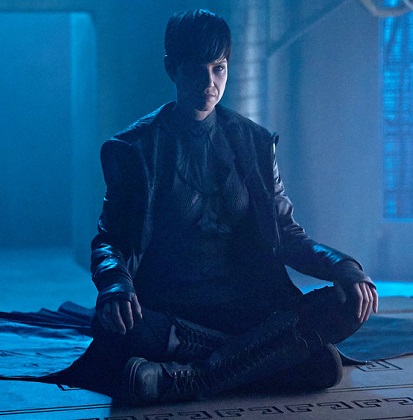 TVLINE | Now that you’ve revealed Olivia is The Witness, how does that change the game?
It changes the game in that it’s certainly personal. She spent a lot of time with them. It’s personal for her as well, because she spent a good many decades hating The Witness, and finding out that the very entity that she wanted to kill was her is going to send her into a bit of a spiral. She always believed The Witness to be primary, to have a plan, [and be someone] who could actually witness, but she is not primary. So she’s going to have to do some radical things to truly witness and bring about this world that she was promised, The Red Forest.

TVLINE | Jennifer is always such a delight. You had a musical interlude with her last season, and then a fun ’80s episode. Is there anything on that level this season?
Jennifer’s got a lot going on this season. It’s everything that you’ve seen before dialed up to a thousand. She’s at the end of her journey, too, so we’re going to see and hear some Jennifer you’ve never experienced before.

TVLINE | What were your favorite time periods to visit this season?
The Western was really fun to do, and then the Middle Ages was something really unique. Nazi-occupied France was spectacular. We just tried to kick up the scope as much as we can, and I think we pulled it off.

Reminder: 12 Monkeys‘ final season will be broadcast over four consecutive weeks, with three episodes airing each Friday from 8 to 11 pm, beginning June 15, until the two-hour series finale on Friday, July 6 at 9 pm.