It’s been four months now since The Good Place left us dangling on a cliffhanger — but finally, showrunner Michael Schur has thrown us a lifeline. 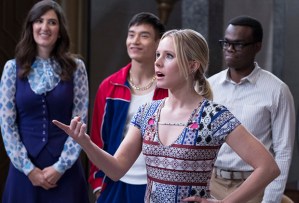 In a new interview with Alan Sepinwall for Rolling Stone, Schur answers the burning question that fans of NBC’s afterlife comedy have been pondering since February’s Season 2 finale: Did Michael actually send Eleanor and her Good Place companions back to Earth, or was that just another simulation? “The four of them are straight-up back on Earth, in a new timeline where they didn’t die,” Schur reveals, adding that “a lot of the progress they have made as people has been sort of theoretical… it seemed like a natural move to send them back to a time before they made that progress, and to use the idea of nearly dying to test their ability to improve.”

Schur and the writers were “worried,” he admits, about having to drop the supernatural aspects in Season 3, since the characters are back on Earth, but he “one of the things we set as a goal for ourselves in the first two seasons was to have at least one weird magical thing in every episode that could only happen in the afterlife. I think we’ve found some good ways to sustain that idea even when they’re on Earth.” (As long as Janet’s still around, we’re happy.)

Schur dropped a bunch of other juicy Good Place tidbits as well:

* When Eleanor found a video of Chidi lecturing back on Earth in the finale, why was he speaking in non-accented English? (The show had established that Chidi spoke French on Earth.) Schur says that during the finale’s table read, William Jackson Harper spoke “in a sort of pan-African accented English, and it was wonderful, and flawless. Like in a ‘Meryl Streep doing a dialect’ kind of way.” But Schur worried that it’d be confusing, since we’ve already seen Chidi speak English in flashbacks, and he also worried that the accent would throw off Harper and Kristen Bell’s comedic chemistry, so they “decided to just have [Harper] speak in his normal voice.” 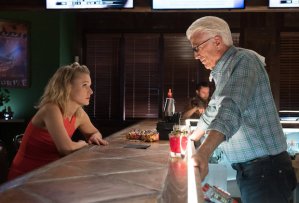 * The Season 2 finale put Ted Danson back in Cheers mode, as Michael appeared to Eleanor as a bartender. “We needed a situation where she would show up and be happy to spill her guts to a stranger,” Schur says, so “a bar (and bartender) was really the obvious choice. I cleared it with Ted first — told him the idea and asked if he’d be OK with it. He, of course, was.”

* Jason’s undying love of the Jacksonville Jaguars is well-established… but what if the Jaguars actually did win the Super Bowl? (The Jaguars’ futility is a running joke on the show, but the real-life NFL team came within one game of reaching the Super Bowl last season.) “We developed a plan for them winning,” Schur says, “and a modified version of that plan will actually appear in [Season 3’s] Episode 3 (as of right now), so I don’t want to give too much away. But we had a plan, and were kind of sad we didn’t get to employ it.” 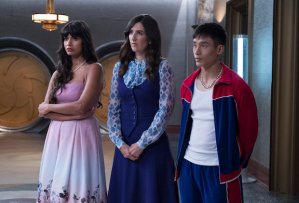 * The Jason-Janet-Tahani love triangle sprung out of their natural character dynamics, Schur explains. For Tahani, she “spent her life caring what other people thought of her, and linking herself to Jason represents a sort of rebellion against that.” And for Janet, when she was rebooting and not at her intellectual peak, Jason “would show Janet a sort of kindness that she was not used to, and it would sort of rewrite part of her internal DNA/code/whatever it is. That mutation within this particular Janet would then become permanent, no matter how many times she was rebooted. It’s all a big, fun, weird mess.”

* How important is the Eleanor-Chidi relationship to the show’s overall arc? Schur doesn’t want to reveal too much, but will say that “the most important thing is the question of how people can be good, and how they can be good to each other, and their relationship helps to answer some of those questions. Or I could be Janet-y about it, and say, ‘It is 27.41% important.'”

What do you think Season 3 has in store for Eleanor and company? Drop your predictions in the comments.