Desna and her nail crew are back, baby, and in charge as Season 2 of Claws kicks off… but a fresh arrival from overseas is bringing new meaning to the term “Russian meddling.” 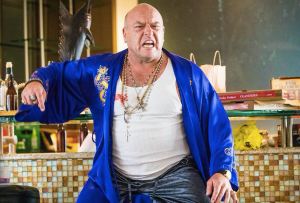 Since mob matriarch Riva took control of Uncle Daddy’s criminal enterprise in last season’s finale, Desna has become a real lady boss, overseeing the money-laundering operation based out of her nail salon. But Uncle Daddy and his boys Roller and Bryce are just about useless now: Daddy is still loudly mourning the death of his wife Juanda, and with no stake in the game, they’re not very motivated to help out, so Desna’s orders go ignored. At least she’s still seeing Dr. Gregory for dinner dates that begin with dancing to Cameo’s “Word Up!” and end with marathon sex sessions… except she doesn’t know he’s secretly a drug lord in cahoots with Daddy.

The nail crew immediately takes notice of Desna’s afterglow, courtesy of “Dr. Do Me Right,” when she shows up at the salon. (A customer even volunteers, “My husband hasn’t gone down on me since LeBron left.” Thanks for that, random customer!) But they have to scramble when Roller’s Russian baby mama Olga drops by for a check-in, rushing to redecorate the place with nesting dolls, blintzes and caviar… and a framed photo of Trump and Putin. (Heh.) When Roller stops by, he ignores the poor girl — she’s nursing your kid, jerk! — and Bryce gives Jen the cold shoulder, too, after her affair with the square-dancing Jew. He’s become fully Roller-ized, with a buzzed haircut and an obnoxiously shiny gold jacket, and Jen now refers to him as “Vanilla Bryce,” which is pretty much perfect. 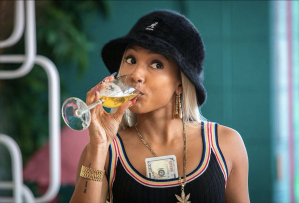 Roller tries to rekindle things with Desna in the back room, but she wants to keep things professional, now that she has a decent man in her life (she thinks). The boys are slacking, though, to the point where Dr. Ken has to torch a trashcan full of cash in his office, since it’s not being properly laundered. Later, Riva stops by the salon to tell Desna she wants to squeeze more profit out of this venture, so she suggests using Daddy’s strip joint to push cocaine. Oh, and Virginia is still hiding her pregnancy, but Dean quickly figures it out, in his own unique way: “The bridge of your nose is two millimeters wider,” he observes.

Uncle Daddy scoffs at Riva’s cocaine proposal, and his solution, of course, is to just kill her. But Riva has family issues to deal with, in the form of Zlata: her sister, and Olga’s mom, played by new cast addition Franka Potente. Zlata tags along when Riva meets Desna and the nail crew at that old-folks home from the Season 1 finale. (Now Riva has old ladies in their underwear bagging up cocaine for her there in a secret room.) Riva introduces Zlata as the author of “the Russian answer to Lean In by Sheryl Sandberg,” but the sisters start bickering when Zlata tries to insert herself into the scheme. Zlata pulls a gun, apparently to threaten Desna and company… but then turns and shoots her dear sis between the eyes. Guess that’s what she calls “leaning in.” 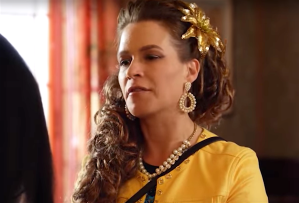 Polly is left shaken by the surprise carnage — she spends all night trying to get brain matter out of her hair — but Desna and the gang play nice when Zlata arrives at the salon to talk business. She and Desna bond over their love of family, and Zlata takes a quick liking to her, celebrating their new female-led partnership by handing out envelopes of cash and flutes of Champagne. (Virginia gladly partakes… isn’t that bad for the baby, though?) Zlata has an idea, too, for an all-male strip revue called Hammer and Pickle (hee hee), and sends Virginia and Quiet Ann out to find dancers. Polly perks up and volunteers to choreograph, thanks to all the years she spent with the Bolshoi Ballet as a kid. (Yeah, right.)

In a sit-down with Uncle Daddy, Zlata asks lots of questions about their pill-pushing operation — and makes it clear she prefers to get answers from Desna. (“You wear crown like boss,” Zlata later tells her.) In fact, Zlata invites Desna to turn the screws on Daddy and his boys, forcing Bryce to watch a sex tape of Jen and the square-dancing Jew and hurling Molotov cocktails at Daddy’s mansion. Then when the crew arrives at Zlata’s place for a baby shower, she surprises them by announcing, “We will have wedding now.” She means Roller and Olga, and it’s just about literally a shotgun wedding, with the Russian priest pointing a pistol at Roller when he protests at the altar. Well, mazel tov!

During a wild outdoor reception, complete with twirling Russian folk dancers, Desna despairs about what to do about Zlata; she thinks the Russians will just gun them down if they try to push back. But Zlata is happy with their new arrangement: “That is what control looks like,” she proudly says to Desna, looking out on the reception that has merged their two families. In fact, Zlata likes Desna so much, she’s taking Jen’s plush mansion away from her and giving it to Desna. “We are sisters now,” she tells Desna before giving her an awkward hug. One big happy family, right?

What’d you think of tonight’s Claws premiere? Grade it in our poll, and then hit the comments to share your Season 2 thoughts.