As The Crossing neared its close on Saturday night (where its final two episodes got burned off), I found myself thinking, “Wow, is a poorly promoted and ill-fated midseason ABC show actually going to leave fans with a sense of closure?”

After all, as history has shown us, that would be quite a thing!

To a degree, yes, a main storyline did wrap up and have a nice enough bow put on it, as Jude, Nestor and Marshall coordinated with Caleb (by way of Roy, of all people) to execute an escape plan for the camp detainees.

Giving their effort some added muscle was Reece, whom Sophie resurfaced to lead Jude to. Reece had been strapped down in a lab and was being subject to who-knows-what kind of tortures when what was intended to be a final and lethal dose of pain instead triggered the Apex beast inside, resulting in her busting free and bustin a buncha security guards’ heads. Jude arrived just as Reece was wrapping up her reckoning, where they discovered that the last scientist standing was holding Sophie at gunpoint. Jude and Reece, though, teamed up on a John McClane/gun-behind-my-back maneuver to save Sophie, after which Reece snapped the geek’s neck.

The big escape plan took shape like this: Marshall showed up at the camp to pick a fight with Roy, during which he handed off a note intended for Caleb. When Jude then stormed the camp gates the next day, demanding that Lindauer release Marshall, Roy passed along Caleb’s response, while Reece slipped from the truck’s undercarriage and into the woods. Reece proceeded to beat down on most every HSI stooge, though Caleb helped out with the last one. (That had importance, since “commons” like Caleb are no fans of Apexes.) After Reece lobbed one of the guards’ walkies into the woods, Jude found and used it to taunt Lindauer about his missing “kids.” A quick search of the bunks seemed to confirm that the detainees were in fact gone, though in truth they were huddled inside the cabin that Roy “checked.” 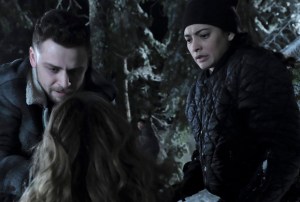 Later that night, Roy cut the power to the fences, allowing Jude and Marshall to a snip an egress hole through which Caleb and the others — reunited Leah and Reece included! — hurried. The power was turned back on in time, though, to give Hannah a massive jolt, after which a distraught Marshall cradled her limp body.

Meanwhile inside the camp, Jude confronted Lindauer and Doyle, who had Roy at gunpoint. A shot rang out, and we realized that Lindauer had put down Doyle, after which he set Roy free. He and Jude then got to talking, about how little the latter knows about what the future holds. But Jude sees that as a positive. The outcome of their standoff would be revealed in a two-week flash forward, where Homeland was questioning Jude about the torching of the camp, the erase of any and all records/files, and Lindauer’s unknown whereabouts. Following that inquiry, Jude slipped off to a remote barn, where he reported to Caleb and (an alive!) Hannah that the feds know nothing. As such, with new identities provided, they are free to be… free!

A truck pulls up to the barn, and it’s Reece with Leah, who has something to share about the Apex scribblings that the future-sharing Naomi left on Cabin 7’s walls. The name “ELLIS” was repeated over and over, the tyke shared. But since the camp is now ashes, there is no way to know the context. But as Nestor later sees back at the cop shop, Jude has the five escapees’ file handy, and he is determined to find Naomi.

Elsewhere, we see Lindauer smash his SIM card before hurling his phone off a dock. Eva, meanwhile, learns the whereabouts of Sophie, and dispatches a grunt to tie up that loose end. What he finds in the hospital bed, though, is a super-strong, feral Sophie, who earlier had shot herself up with the Apex serum, against Reece’s wishes. As a nurse later finds the dead goon, the series’ final scene is Sophie strolling the streets, a new, impervious confidence crackling behind her eyes! 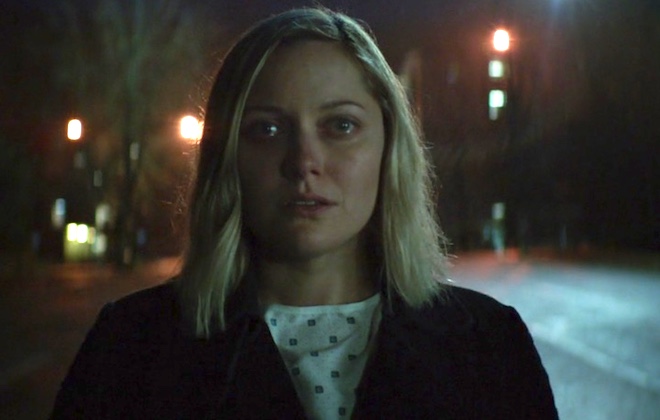 Did the unceremoniously cancelled The Crossing deliver enough closure for you? Or are you nonetheless cursing the lack of a renewal?