Thursday’s Drag Race found each of the five remaining queens facing off against the one person capable of destroying them. But first… pancakes!

With Cheyenne Jackson serving as a special guest judge, this week’s mini challenge required the queens to decorate pancakes — as well as assign them unique backstories and sassy personalities, like all good pancakes should have — to craft the ultimate drag brunch experience.

Asia O’Hara’s blunt-smoking “Panqueesha” ultimately took the cake (teehee), but if I’d been in Jackson’s place, I would have awarded the victory to Aquaria. (Come on, “Pancake’s Labyrinth”?! That s–t was brilliant and looked delicious.)

After judging the remaining queens by the strength and character of their cakes, RuPaul laid out this week’s maxi challenge: Walk the runway as two separate characters — one that represents your “best and brightest” qualities, followed by a “dark-sided beyotch that oozes negativity.”

In what might have been the riskiest idea of the season, the queens worked together to brainstorm each other’s strengths and weaknesses. Sure, there were a few encouraging moments — like when Aquaria told Miz Cracker that she’s too hard on herself — but things got real awkward when Asia O’Hara told Miz Cracker that she lacks depth. I guess I respect her honesty, but with the rest of the queens playing nice, it felt especially hurtful. (Read the room next time, Asia.) Of course, things made a lot more sense later in the episode when Asia revealed to Ru that sadness and anger are what she’s “comfortable” with.

I’m not sure why so many of the queens equated “evil twin” with “tribal warrior,” but both Kameron Michaels and Miz Cracker walked the runway in confusing costumes; Kameron’s was intended as a dark reflection of her “good twin” look, which itself looked straight out of a video game, while Miz Cracker’s was… honestly, I’m not really sure what she was going for, but at least her “good twin” look (“Marie Antoinette by way of Sofia Coppola,” as Lena Dunham described it) was stunning.

Even though I loved Eureka’s Clueless-inspired twins — which she acted the hell out of, garnering well-deserved praise from Dunham — I can’t disagree with the judges’ decision to give this one to Aquaria, who walked the runway as the sexiest dame at the Easter Parade before returning as a wild beast with her skeleton on full display. Sure, I would have appreciated a little more cohesion between the two looks… but they were both such. good. looks. 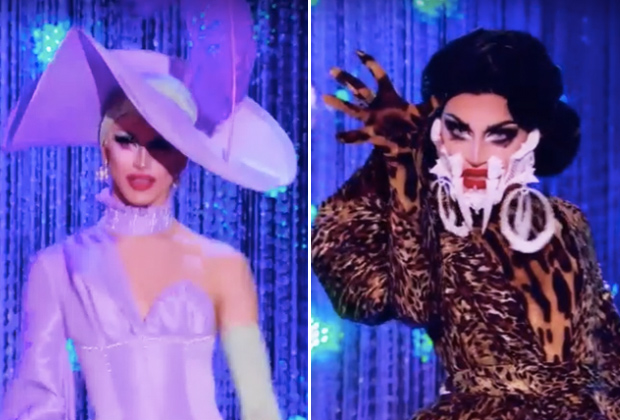 I also can’t disagree with Ru’s decision to pit Kameron against Miz Cracker for a lip sync battle in the key of Vanity 6’s “Nasty Girl.” And even though I went into this episode certain that it was Kameron’s time to go, I found myself oddly entranced by her performance. She may have a permanent home in this season’s bottom two, but there’s a reason she keeps surviving these battles; lip syncing is clearly her game. And so, Miz Cracker was sent sashaying away.

“I feel completely crushed right now,” Miz Cracker said on her way out. “This is not what I cam here to show America. I didn’t do it, but I gave it everything I had. I know I have a much better heart — all I need to do is learn how to show it. Remember: If it’s thin and white and salty, it’s probably a cracker.”

Your thoughts on this week’s elimination? Which of the four remaining queens will you root for now? Cast your vote below, then drop a comment with more of your reactions.