Jim Carrey is returning to TV… but his new show looks to be more Eternal Sunshine than Fire Marshal Bill. 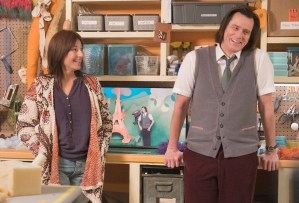 Showtime has announced a premiere date for Carrey’s new comedy Kidding — Sunday, Sept. 9 at 10/9c, following the Season 9 premiere of Shameless — and released a new trailer that makes Kidding seem more like a melancholy dramedy than an all-out laugh fest. In it, Carrey plays Jeff Pickles: the kindly, Mr. Rogers-esque host of a puppet-filled children’s TV program. He tells his kid fans that “smiles are a little gift we give each other. That’s the most beautiful part of your soul.”

But his own life doesn’t give him much to smile about: His wife (Judy Greer) left him, and his own son (Cole Allen) says it’s because he’s “a pussy.” (Jeff calmly replies, “Please don’t use a bad word when you could use a good word.”) We sense a potent rage underneath all of Jeff’s niceness, and his executive producer Seb (Frank Langella) has to remind him that he’s “a trusted brand.” Maybe not for long, though.

Kidding also stars Catherine Keener as the show’s head puppet maker Deirdre, and Michel Gondry, who directed Carrey and Kate Winslet in the 2004 indie romance Eternal Sunshine of the Spotless Mind, serves as an EP and will direct several episodes.

Press PLAY above for a sneak peek at Kidding, then hit the comments and tell us: Will you be tuning in?