It wasn’t just bills that were doing a little mounting in Tuesday’s Animal Kingdom. Though “In the Red” was almost all about the Benjamins — specifically, Smurf’s lack of ’em — one naughty new non-couple dug more out of one another’s pants than loose change. Who scored — and who was gonna turn a C-note shade of green when they found out? Read on… 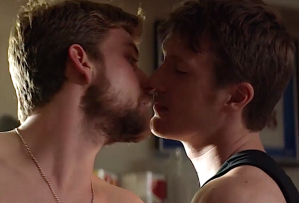 ‘I WAS JUST GONNA GET NAKED AND HANG OUT IN THE BACK’ | After pulling off the theft of three pricey speedsters with new accomplices Sully, Colby and Ox, Deran raced back to his bar to give himself an alibi. There, he found not just the usual beer-soaked beach bums but his old flame Adrian, who complimented his new ’do — and asked if it meant that he was “having a midlife crisis.” During their catch-up, we learned that two months had passed since Baz croaked, Deran hadn’t kept up with Craig, Adrian had wiped out in his attempt to become a pro surfer, and who were they kidding? All that talk was just killing time till they stripped down and headed for the back room. The morning after, Adrian told his former — and future? — boyfriend that he wouldn’t be paddling out on tour again since sponsors tended to back, you know, surfers who didn’t lose. Instead, he was re-enrolling at UCSD, so Deran should call him maybe.

‘I DON’T NEED HELP’ | Meanwhile, Pope was doing his best to play doting dad to Lena (and certainly doing better than her actual father ever had). If you forgot for a second that he’s a psycho, it was pretty adorable, too, watching the secret softy deal with TV time limits and questions like “Why is breakfast important?” But things turned more serious when Lena insisted that she was too sick to go to school — and Pope learned from a note sent by her teacher that the reason was, kids were bullying her, calling her late dad a criminal. What kind of brat would pull s— like that? he asked Lucy when she stopped by. Mind you, she wasn’t there to offer parental guidance. She was sympathetic and all, but really, she was there to show Pope the police’s file on Baz’s case. Among its “revelations”: There had been no witnesses, no cameras on the street, and the members of Javi’s crew had alibis. So all in all, bupkis. 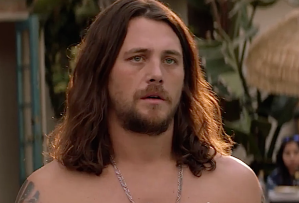 ‘FIND A DENTIST ON VACATION’ | In Mexico, when not snorting coke, catching waves or shagging Ren, Craig was working on starting up his own tequila brand, Agua Agria (which, according to Google Translate and Ren means “sour water”). And, as far as we could tell, it was going reasonably well — especially considering that the enterprise was in the hands of a screwup like Craig. But then… oh, then. Such a big “then” with a capital T. Craig found a kid ransacking his room during a party. None of his guests would claim the foul-mouthed youngster as their own, so Craig handed him a wad of cash and pushed him in the pool. Considering how violent the Codys can be, I thought the little thief got off pretty easy. The kid’s father — and I’m guessing at the relation here — did not. A day or so later, the tough guy showed up with the baby-faced bandit and some henchmen, expressed his displeasure with Craig and Ren’s noisy bashes, and proceeded to beat the stuffing out of the party animal.

‘WE WOULDN’T WANT SMURF TO END UP WITH A PUBLIC DEFENDER STRAIGHT OUT OF UC IRVINE’ | As if J didn’t already wear the expression of someone with the weight of the world on his shoulders, Morgan dropped off not only her bill but that of Smurf’s high-powered criminal defense attorney, Goodwin. And here, J couldn’t even afford to pay the pool guy to get the dead bird out of the vent for Nicki! Upon hearing of the boy’s financial difficulties, Morgan warned that if the rent stopped passing through Smurf’s properties, the cops would quickly figure out that her real-estate business was actually merely a money-laundering scheme. Could J sell a building to raise some cash? he asked. Only if they did a private sale, the lawyer replied — and that would give her ownership of Smurf’s properties. Eh, no, J said. He’d figure something out. 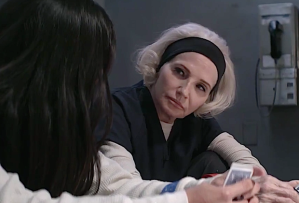 ‘I’M JUST SOMEONE’S GRANDMA’ | In the clink, Smurf was approached by an inmate named Alvarez whose boyfriend had left her holding the bag during a liquor-store robbery; now, she was doing two years. “Like I give a s—” was the classic Smurf response. But Alvarez had an idea, see. She and her man had had a bigger score in the works before she was sent up the river, and she wanted to get the job done before he could. Easy money, she insisted, and lots of it. Maybe Smurf could get her boys to do it? Mama Cody took a hard pass. But as a fight broke out across the room, you could tell that she wasn’t entirely ruling it out as an option. Later, when J visited, Smurf ordered him to use his private stash to pay not just the Trujillos but Goodwin. And yes, she knew had a private stash. Unlike her boys, J had gone hungry and slept in cars growing up. “You have a Plan B,” she said as if reading a page from a book with especially big, bold print.

‘DON’T THROW AWAY YOUR LIFE ON COLLEGE’ | Upon being informed by Colby and Ox that Sully has been arrested, Deran angrily bailed out his hare-brained accomplice, then… yikes. He drove the petrified nimrod to a remote location, had him lie face down in the dirt and warned that “if you ever say my name again, I will find you, and if I can’t because I’m in prison… there are a lotta Codys… and I’m the nice one.” With that, he shot so close to Sully’s ear that it deafened him (and possibly blew off the lobe?!?). Later, Deran insisted that Adrian was too good a surfer to give up on the tour and offered to sponsor him — to the tune of $50k. Adrian refused to take any money from Deran’s family, but this wasn’t theirs, Deran pointed out. It was his. 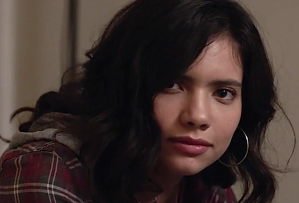 ‘STOP… I’LL TELL YOU WHEN TO MOVE’ | When J left the prison after his meeting with Smurf, Mia was waiting for him — he was, after all, days late with her family’s payment. He didn’t have the money on him, of course. But that was fine with her; she’d just hang with him until he got it. So, off they went to see the neighbor with whom J and his late mother had been so close. “Is this Nicky?” asked the woman when Mia refused to stay in the car. Yeah, uh, no. During the incredibly awkward… “chat” would be a stretch. During the incredibly awkward “visit” that ensued, Mia learned that J’s mother had OD’d on heroin. “It’s painless, at least,” she noted. “My mom got stabbed.” She’d been a junkie, too, Mia added. So she and J had that in common. After he took out a deposit from his stash and they left, Mia asked him, “Who’s Nicky?” then made it clear that she really didn’t care who she was by climbing into his lap in the driver’s seat and bossily seducing him. (Something tells me J might come to regret letting his girlfriend know where he keeps his gun!)

‘ARE WE SERIOUSLY THAT POOR?’ | Eager as always to improve Lena’s lot in life, Pope told her that she was smart like her mom. Therefore, she had to keep going to school. But, she didn’t have to keep going to her school. When he presented her with a bunch of pamphlets for private academies and told her to take her pick, she was stunned. “These are for rich kids,” she gasped. “What the hell do you think you are?” he replied. (Again, if you forgot the psycho part of Pope, you had to admit, however reluctantly, it was kinda cute.) As the hour drew to a close, J returned to Casa Cody to find Pope pissed that he’d missed their weekly family dinner with Lena. But J was upset, too. Before he was even through the gate, Nicky had inadvertently tipped him off that his uncles had pulled a job. Had they? Pope asked. This was the first he’d heard of it. It wasn’t us, it was me, Deran admitted. And what did it matter, anyway, since they were making their own decisions now? 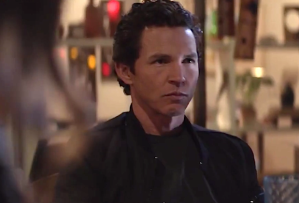 ‘THEY WANT EVERYTHING’ | If Deran had scored, “I need the family cut,” said J, warning his uncles that they’d lose their real-estate holdings if they didn’t get money flowing through them again. (Also, if Nicky didn’t stop ordering everything in sight off Amazon!) They might even lose the house! So they were all going to have to fork over their shares of the small fortune that Baz stole from Smurf’s storage unit. That money’s long gone, Pope and Deran said (although it having only been two months, long gone might have been a stretch). “Then we need to pull a job,” J concluded, to the tune of at least $100k. Just then, in came Craig, his tan now offset by a lot of painful looking-black-and-blue bruises. Someone stole all his s—, he reported. And just like that, the Cody boys were back in business.

So, what did you think of “In the Red?” Did you see J and Mia’s hookup coming? Do you suspect that it means, as Season 3’s trailer suggested, it’s curtains for Nicky? Hit the comments.