Robert Mandan, best known to TV audiences for his role as Chester Tate on the classic ABC sitcom Soap, has died at the age of 86.

Mandan passed away in Los Angeles on April 29 after suffering a long, undisclosed illness, according to The Hollywood Reporter. He is survived by his wife, Sherry Dixon.

The veteran TV actor got his start in soap operas, with stints on From These Roots (1959-1961), The Edge of Night (1963), The Doctors (1963) and Search for Tomorrow (1966-1970). He continued to work regularly throughout the 1970s, appearing on episodes of All in the Family, Maude, Sanford and Son, Mission: Impossible and The Streets of San Francisco, among other high-profile series. 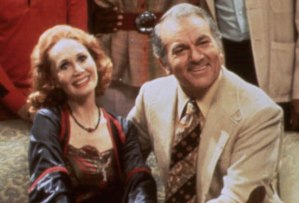 Mandan’s star-making role came soon after, when he was cast on the aforementioned Soap as the philandering husband to Katherine Helmond’s Jessica from 1977 to 1981. The series ran for a total of four seasons and spawned the successful spinoff Benson, starring the late Robert Guillaume.

After Soap, Mandan starred as Col. Lawrence Fielding in the TV adaptation of Private Benjamin, which ran on CBS from 1981-1983. In 1984, he starred opposite John Ritter on the short-lived Three’s a Crowd, in a role he originated in the final episodes of Three’s Company. In 1986, he appeared on The Facts of Life as Dr. Bruce Gaines, a member of the Peace Corps who married Mrs. Garrett in Charlotte Rae’s farewell episodes. Then in 1991, he reunited with Soap spouse Helmond in two episodes of Who’s the Boss.