Warning: Upon watching the series premiere of FX’s Pose, you may get the urge to spontaneously dance to a Whitney Houston classic.

After all, the climax of Sunday’s series premiere finds aspiring dancer Damon performing improvised choreography to Houston’s “I Wanna Dance With Somebody,” and it could very well be the most joyous three minutes of television so far this year.

Set in New York City in 1987, Pose centers on the city’s underground LGBT subculture known as “ball” culture, in which men and women don extravagant themed costumes and compete for trophies and prizes. It’s a vibrant, energetic scene, and the balls featured in Pose‘s first episode put even the most iconic RuPaul’s Drag Race lip syncs to shame.

The FX drama first introduces us to the House of Abundance; in ball culture, houses are safe spaces where young people can find a second family of sorts, particularly when the alternative is living on the streets after their real families have banished them for being gay or transgender. The House of Abundance is clearly a respected one, and house mother Elektra isn’t afraid to get creative: In the first ball of the series premiere, Elektra and her children walk in head-to-toe royal garb… which they stole from a museum near the ball venue, resulting in a truly glamorous arrest for Elektra and her house children when the cops show up at the event.

But when Blanca, a transgender woman in the House of Abundance, is diagnosed with HIV, she parts ways with her house, feeling for the first time like she should follow her own dreams. She decides to start her own house, and not long after finding herself a new home in the city, Blanca takes in her first “child”: Damon, a young man who was recently thrown out of his house for being gay — and for loving dance.

Throughout the hour, Blanca introduces Damon to ball culture and encourages him to pursue his dance passion, even persuading him to participate in a dance challenge against The House of Abundance at the next ball. (Blanca’s house, The House of Evangelista, ultimately loses the challenge — which will likely damage the house’s reputation in New York — but it’s still the most fabulous failure you’ve ever seen.) 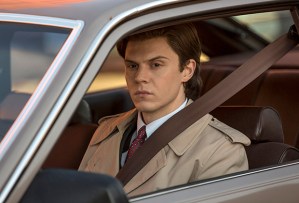 Blanca also helps Damon obtain an application to The New School for Dance, but he’s clearly held back by self-doubt and the fear of rejection; he misses the application deadline and seems content to let his dreams pass him by. But Blanca refuses to give up on her house child, and she walks right into The New School and has a candid conversation with the dean of dance, telling her that Damon has the talent — and the heartache — to blow everyone at The New School away.

Swayed by Blanca’s passionate plea, the dean agrees to let Damon audition for her right then and there. And even though he doesn’t have choreography prepared, even though he fumbles his way through the first minute of “I Wanna Dance With Somebody,” Damon ends up performing an exhilarating, dance-like-no-one-is-watching routine for the dean and two of her colleagues, prompting the dean to give Damon a tearful hug at the end of his number.

“I’d be dead if it weren’t for you,” Damon tells an anxious Blanca after he leaves the audition. “Another day in the park and I would’ve went with anybody for some food, done anything.” Then, after a pause: “I got in.”

Pose‘s premiere also introduces us to Stan, a businessman played by American Horror Story staple Evan Peters. Though Stan has a wife and kids — and a cushy new job at Trump Tower — he has a regular habit of parking at the street corner where a transgender woman named Angel, also of the House of Abundance, hangs out. This time, when Stan arrives, Angel gets in his car, and they spend most of the evening simply talking to each other about their dreams. They end the night with a kiss before Stan returns home to his family, and Angel is completely smitten. (“I can’t believe you work for Donald Trump. That’s so super-impressive!” Angel beams, totally unaware of the 2018 irony.)

The next day, Angel shows up at Trump Tower to see Stan, and he tells her she isn’t “someone I can be with,” which leaves Angel devastated. She attends her house’s next ball that evening, wearing a gown that doesn’t quite match the “high-end evening wear” theme — and after she’s laughed out of the venue, she decides to leave The House of Abundance and join Blanca’s House of Evangelista instead.

But it seems Stan can’t stop thinking about Angel, no matter how hard he tries to repress his feelings for her. After mistakenly thinking he sees Angel while at a posh anniversary dinner with his wife (House of Cards’ Kate Mara), Stan decides to return to Angel’s corner the following night. “It’s nice to see you,” Angel tells Stan at his car window. “It’s nice to see you, too,” he replies, and the two drive off together.

OK, your turn. What did you think of Pose‘s debut? Grade the series premiere in our poll below, then hit the comments to back up your choice!