Watching AMC’s new drama Dietland is kind of like eating at a buffet that serves every variety of cuisine imaginable. You fill up your plate with baby back ribs, and mushroom risotto, and an egg roll… and suddenly, you’re feeling queasy.

I had a hard time digesting the first two episodes of Dietland — which premiere back-to-back on Monday at 9/8c — because it tries to be three very different shows at once. It’s a Devil Wears Prada-esque workplace dramedy, and also a warts-and-all look at a overweight woman’s struggle to accept herself, and also a Sweet/Vicious-style revenge thriller that aims to topple the patriarchy. These three plot threads coexist uneasily in Dietland‘s initial hours, and never really cohere into something genuinely compelling. 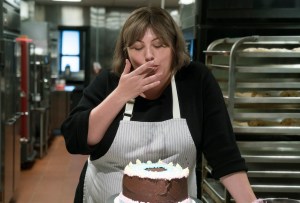 Relative newcomer Joy Nash (who’s had bit parts on Twin Peaks and The Mindy Project) stars as Plum, who got that nickname because she is “succulent and round” (a euphemism for “fat,” she tells us). Plum ghostwrites an advice column for a glossy fashion magazine run by Kitty Montgomery (Julianna Margulies), so her voice is heard, but she rarely feels seen. Plum is also an expert baker, but she’s constantly trying to lose weight, so she crafts gorgeous cakes that she can’t eat. She’s lonely and aimless, but her life takes a sharp turn when she’s recruited by a mysterious underground feminist society… that may or may not be connected to a recent string of vigilante murders targeting notoriously abusive men.

There’s a sarcastic, sinister edge to all of this: Creator Marti Noxon covered similar territory on Lifetime’s UnREAL (she left after that show’s still-unmatched freshman season), and her scripts, based on Sarai Walker’s novel, rub our noses in the harsh, ugly realities of modern beauty standards. (The magazine’s beauty closet manager Julia, played by Tamara Tunie, refers to it as the “dissatisfaction industrial complex.”) It’s all undeniably timely… but it’s so hard-edged, it keeps us at a distance. Plus, Plum is a tough character to connect with — emotionally closed-off, with wildly conflicting emotions — and her world-weary narration doesn’t bring us any closer. In fact, we’re stuck in her head so much, it starts to feel claustrophobic.

Meanwhile, Dietland‘s visual style is so eclectic, it’s disorienting, throwing in weird animated interludes and surreal asides along with sudden bursts of violence. It’s all very cruel and unforgiving in tone; the show’s worldview is so acidic, it burns. There’s a nice, spiky narrative in here somewhere, but it gets lost in pages of ponderous speechifying about What’s Wrong With Society Today. Too often, Dietland wants to give us a lecture, rather than tell us a story. 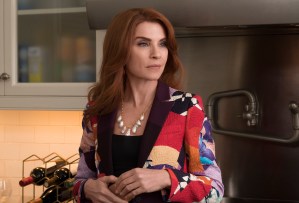 Margulies’ presence, unfortunately, is a bit of a red herring: Fans will be disappointed to learn that she’s just a minor side character here. Margulies’ Kitty is an intriguing woman — obliviously self-involved and carrying herself with an imperial air, like an evil Disney queen come to life — but she’s limited by the show’s manic storytelling. Erin Darke (Good Girls Revolt) also does good work as Gothed-out revolutionary Leeta, but there are precious few other characters to latch onto.

Dietland debuts with a two-hour premiere — which is usually a sign that the network isn’t sure the premise adequately came through in the first hour. Well, they’re right in this case… and the second hour doesn’t do much to help. If this were just a revenge thriller, or just a beauty-standards takedown, it might find its groove — but as is, Dietland is just too bloated to add to your DVR plate.

THE TVLINE BOTTOM LINE: Frantic and hard-edged, AMC’s Dietland tries to juggle too many genres and champion too many causes, and never quite gels.