The first half of Arrested Development Season 5 is something of a “hot mess,” all of which culminates in a midseason finale that has at least a half-dozen dangling plot threads.

As “Premature Independence” draws to a close, Lucille’s plan involving Lucille 2’s disappearance is falling apart, while Lindsay is still nowhere to be found. Meanwhile, Michael is on the verge of incriminating himself, and Tony Wonder (probably) died. Yeah, there’s a lot to unpack. Let’s give it a try, shall we? 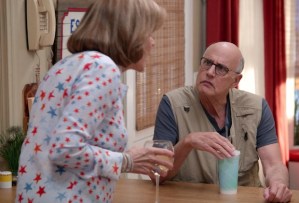 Lucille pays Buster a visit in prison and reveals that Lucille 2 is fine, but can’t come home right now. In exchange for her son’s silence, she agrees to let him attend the 2nd of July parade on furlough. Back at the beach house, she explains to George Sr. that she’s worried how Buster’s appearance at the parade might impact Lindsay’s congressional run… only it’s not George Sr. with whom she’s speaking. It’s his twin brother, Oscar, who’s believed to be in Mexico with Lucille 2.

Tobias phones Lucille from Mama Bark’s trailer, informing his mother-in-law that he and Murphybrown have been unable to find Lindsay in time for the parade. Instead, he returns to Orange County with ex-girlfriend DeBrie, who reluctantly agrees to serve as Lindsay’s stand-in on the Bluth family float. Sally Sitwell, meanwhile, uses a papier-mâché mockup of Lucille 2 to represent her own missing candidate.

Buster arrives at the parade, where he’s expected to fill in for Stan Sitwell as an officer on the Keystone Cops float. When he exits the prison bus, the guard tells him he’ll be playing a prisoner instead. GOB, meanwhile, is counting on Tony Wonder’s arrival so he can move forward with his closet illusion. He asks both Michael and Buster if they’re willing to fill in for Tony, but both of his hermanos say no. 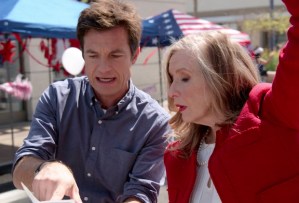 Michael, who believes he’s in possession of a photo showing Lucille 2 and Oscar in Mexico, confronts his mother at the parade. There, Lucille admits that she sent Buster’s girlfriend away to plunder her business and help Lindsay’s campaign. Michael, who’s disgusted that his mother would let Buster sit in prison as part of her sinister plan, confronts district attorney Lottie Dottie. He joins her on a parade float and shows her the photo, which proves that Buster shouldn’t be in prison. Lottie Dottie tells Michael she’s lucky she doesn’t have to face him in a court of law, and he says, “Maybe one day you will.” He’s, of course, referring to his lifelong dream of becoming a lawyer, while she’s suggesting they’ll one day meet in court if it turns out Oscar and Lucille 2 aren’t the individuals in that photograph.

It’s then time for GOB’s double-closet sexuality switch/two-hander float illusion. Tony arrives just in the nick of time, and the show gets underway, “surrounded by paid protestors meant to depict both sides of a culture war that kind of ended a few years ago, didn’t it?” Once in their respective closets, GOB reveals to Tony that he put this elaborate stunt together to see him one last time. They both agree this is it… but then a potentially fatal twist occurs that not even GOB knew about. A crane is positioned above Tony’s closet, and out pours gallons upon gallons of cement. Assuming this is not part of some convoluted, Wonder-ful escape plan — which is doubtful, since Tony mentioned there was no trap door — Tony is in fact dead.

Afterwards, the real George Sr. approaches Lucille in the crowd, and asks if they got Lindsay in time for the parade. (This proves it was Oscar back at the beach house.) George then reveals to his wife that he lost the sweat lodge land to the Mexican Romneys; without it, their plans for the U.S.-Mexico border wall fall apart. “The Chinese will expect Lindsay to support a wall we can’t afford to build,” Lucille explains. And so, the only way to ensure they don’t lose everything is to make sure Lindsay loses the congressional race. Seconds later, the family float makes its debut, and a nervous DeBrie — who, as you’ll recall, is pretending to be Lindsay — is hiding under a black sheet. The crowd thinks she’s disrespecting Muslims, which in turn might hurt (or help) her chances.

Later, George-Michael arrives to confront Michael, telling his father that the photo he believes is of Oscar and Lucille 2 is actually a photo of him and Maeby in Ron Howard and Brian Grazer wigs. George-Michael tells Dad that it’s probably best that he tell Lottie Dottie the truth, but Michael convinces his son that honesty is not always the best policy. (The Season 5B cliffhanger is totally gonna be Michael’s arrest, isn’t it?) And so, they agree to withhold this information from the DA.

As this is happening, Oscar arrives at the parade. He’s poorly disguised as one of the Keystone Cops, then as a fellow prisoner. Once he gets close enough, he breaks Buster out of the prison float. They speed off in Sally Sitwell’s staircar, and Buster is under the impression that it’s all part of a bit. What’s more, he believes the man who broke him out is his father, not his uncle. As Ron Howard eventually makes known, Buster’s escape constitutes a prison break, and Mr. Motherboy now faces 30 years behind bars.

What did you think of the Arrested Development midseason finale? Grade it — as well as the first half of Season 5 — below, then hit the comments to flesh out your thoughts.