Warning: Being a recap and all, the following contains spoilers for the Season 3 premiere of Animal Kingdom.

Animal Kingdom’s Season 3 premiere (which was sneak-peeked in the wee hours of Tuesday morning) wasted no time resolving at least one of the TNT drama’s Season 2 cliffhangers. Though at the end of the hour we still didn’t know who’d shot — or ordered the hit on — Baz, we did know whether Scott Speedman’s character was headed for a recovery room or the morgue. So which was it? Keep reading. (Don’t worry, this recap won’t keep you in suspense for long, either.)

May Sweeps 2018: Most Shocking Deaths

‘WAIT TILL YOU MEET THE MOTHER; YOU’LL WANT TO SHOOT SOMEONE, TOO’ | Early on in “The Killing,” it looked, at least if we didn’t look too closely, like Baz might pull through. But, having lost enough blood to fill up an entire other person, he ended up dying on the operating table. (Too bad he couldn’t have been taken to Grey Sloan… ) After the cops broke the news to Pope, he rounded up his family for a powwow at Deran’s bar. Since Craig was MIA, J wondered aloud about the fact that he’d left town around the same time that Baz was shot. No way was he involved, snapped Deran, sticking up for his favorite brother. He seemed to think that it could have been Lucy. Pope, on the other hand, suspected that the guilty party was Javi’s posse — and that they were just getting started exacting their revenge. For… ? Smurf was doing time for Javi’s murder, Pope testily reminded Nicki. “You don’t think his crew is gonna have something to say about that?” 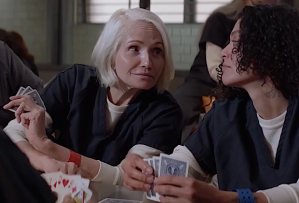 ‘BEING A GRANDMOTHER IS THE REWARD THEY GIVE YOU FOR RAISING THOSE BITCHES’ | Speaking of Smurf, she was having a swell time playing the grand dame of cell block C until Detective Pearce dropped by to inform her of Baz’s demise. And whether she really was torn up about it or — the smarter bet — was just putting on a show, she came off genuinely distraught. For a hot minute. Then she suggested that Pearce question that “Mexican woman” that Baz had been seeing. Little did Smurf guess in that moment that she was about to be smacked with a much bigger upset than an annoyingly persistent cop paying her visits or a treacherous “son” kicking the bucket. The gang that she was paying to protect her behind bars discovered that her stolen goods had been taken from Baz’s secret house. Don’t worry, it won’t impact our “arrangement,” she insisted in such a way that you could tell she was totally scared s—less. 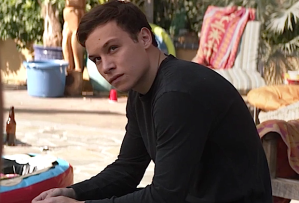 ‘KEEP YOUR MOUTH SHUT AND LOOK SAD’ | Back at Casa Cody, Pope, Deran and J armed themselves in anticipation of another attack by Javi’s boys, and Nicki… oh Nicki. She made nachos. While the guys went back over the suspects list, with Pope taking a particularly keen interest in the nothing that J remembered about Manny’s funeral, Nicki pondered Lena’s fate. Would she end up in foster care? No, grumbled Pope. Obviously, he’d step up. (And honestly, hadn’t he already proven to be a more caring father to the little girl than her actual father had ever been?) Before the group headed, as ordered, to police HQ to play (Dodge) 20 Questions — not you, Nicki! “You’re not family!” — Pope caught J alone and pressed him to reveal where Baz had stashed the fortune that he and Smurf’s grandson had stolen from her storage unit. But, of course, J didn’t know. At least as far as we know; ol’ babyface is a lot more cutthroat and cunning than he once appeared. 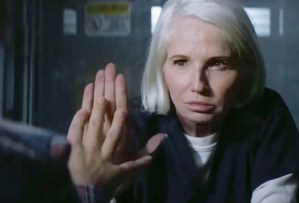 ‘DO YOU KNOW HOW IMPORTANT IT IS NOT TO LIE TO YOUR GRANDMOTHER?’ | When J visited Smurf in the pokey, she dropped this mind-screw of a condolence on him: “It’s horrible, having your father murdered like that.” J’s reaction was much like ours: Wait, what? Was Baz really J’s dad? “Of course he was, baby,” Smurf replied. Now that she’d sufficiently rattled her grandson, she moved on to what was really important to her: her s—. It wasn’t where she’d thought Baz would hide it. So, she pulled out a trick any mother knows and dropped J’s nickname to ask, “Do you have my things, Joshua?” For the second time that day, the teen had to insist that he didn’t know where the stuff was. Off that tense tête-à-tête, J was instructed by Pope to leave behind his car. (Uh-oh.) And his gun. (Double uh-oh.) J’s uncle wasn’t taking him for the last ride of his life, however; they were just going to pick up Lena from school. Afterwards, Pope lied to the little girl that her dad had had to take a long, possibly permanent trip. But Pope could come stay with her at her house, he suggested, fighting back tears, “if that’s all right with you.” It was more than OK by Lena. And “you don’t have to cry,” she said. “My house is nice.” 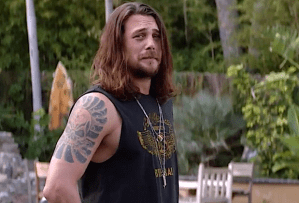 ‘MY DAD’S DEAD?’ | When Pope, J and Lena returned to Casa Cody, the guys left the kid in the car while they went out to the pool to find out the identity of their mystery guest: Lucy. Only Lena didn’t stay in the car, so she was on hand to overhear Lucy expressing her shock that Baz had died from the gunshot wounds he’d sustained when last she’d seen him. (Oops.) Later that night, while Deran’s zillion texts finally got through all at once to Craig, interrupting his partying with Ren in Tijuana, Pope snuck into J’s room and, while Nicki kept right on sleeping, warned that he was gonna find out who’d killed Baz, and when he did, he’d end them. (Sweet dreams, J!) The following day, Pearce presented Smurf with an offer: If she’d give up her boys, he’d get light sentences for Craig and Deran, and let J off scot-free. But “Pope needs to be put away” for the long haul, the detective said, “before he has a chance to hurt more people.” As for the Cody about whom Smurf was most concerned — herself — she’d still have to do 10-20 years. But hey, her boys could still have lives. If she didn’t take the deal, Pearce swore to nail her, anyway, then let her boys “fall apart like a cheap suit.” 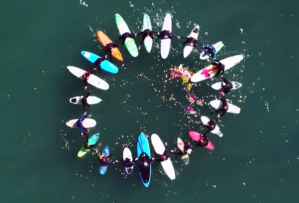 ‘YOU DON’T EVEN SPEAK SPANISH’ | Back at Casa Cody, Pope questioned Lucy. Did she have another boyfriend or something? Whether Pope believed it, she replied tearfully, she’d loved Baz and had since she was 16. It had only been Smurf who’d kept them apart. Meanwhile, J paid off the crew that was protecting Smurf in the big house — and failed to get a name out of a girl his age who collected the dough. At the beach, Craig told Deran that he’d be going back to Mexico. Deran had his bar now, his brother pointed out; it was time that Craig found something for himself. (Presumably something that paid better than binge-drinking and having sex with Ren.) Once the duo were joined by Pope, J, Nicki and a bunch of others, they all paddled out to sea on their boards, threw their leis into the center of the circle they formed, and held a little surfer’s funeral for Baz. So, were you surprised that the show really killed off Baz? Do you think J was the shooter? Grade the episode in the poll below, then hit the comments.