For Sarah Shahi, NBC’s VR thriller Reverie offered the opportunity to go crazy like never before… while also fulfilling a promise she made to her embattled childhood self.

Premiering Wednesday, May 30 at 10/9c, Reverie stars the Person of Interest favorite as Mara Kint, a former FBI hostage negotiator who is recruited by her onetime boss (24‘s Dennis Haysbert) to work for the titular tech company, which has created a virtual reality program that allows people to revisit memories… or fabricate new ones.

The thing is, Reverie is so immersive and customizable that the client might not wish to return to reality — thus sending their body into a real-life coma. Upon receiving a crash course from programmer Paul (Covert Affairs‘ Sendhil Ramamurthy), Mara is tasked to join clients inside their dreams and hopefully persuade them to return to reality.

Here, Shahi shares her take on the Alice in Wonderland-meets-Inception concept and the real-life demons Reverie helped her purge.

TVLINE | In the first episode, when we meet Mara as a teacher of interpersonal dynamics, she mentions how people these days are less observant because of their devices. What sort of things have you learned about human behavior through inhabiting this role?
Well, it’s interesting because that was one of the main selling points to me even signing onto this project — in my household, everyone’s on a device almost all the time. I’m bad, too, but not to the extent that the children and the husband are. I’m constantly finding myself saying, “Can you look up? Can you make eye contact? Can you look up?” And so when I saw that in the script, it felt very, very familiar to me. With the advancement of all these really fun, cool gadgets and information at our fingertips, we don’t even have to wait for anything anymore — and that comes at a price.

Human contact, that touch, that thing that you’re supposed to share with another human being…. Not to get too sappy so early, but that kind of stuff that really does make the world go round, and living in this society of technology and robots and now virtual reality… I think it straddles the line sometimes, with being a little too much. I mean, I still love a legal pad and pencil!

TVLINE | Mara’s first case involves a guy who is having trouble coping with his wife’s death, and that’s why he’s stuck in his reverie. Give me examples of other cases that she will deal with.
Every episode has its own Alice in Wonderland-type of feel, where I kind of enter a new world, and that is super fun to play with. Another one that we have is called “Jane Bond,” which is about a girl who’s incredibly introverted and she wants to live a life of excitement, and then she ends up finding some things about herself that she didn’t know were going on until she does that. Another one that is really cool — by the way, you should definitely invest in a box of Kleenex for when you watch these! — is a terrorist episode where a bomb goes off in the building and one of the accomplices is in a coma. In order for me to figure out who the person was that did this, I have to put a girl into an involuntary reverie and then enter it. And because she’s dying, the reverie starts collapsing as her body’s shutting down. I have to get this information quickly, or I’m going to be stuck.

TVLINE | Regarding “Jane Bond”: I thought people could only revisit memories they actually experienced. Or can you choose to do something you’ve never done?
No, you can choose to sign up for whatever you want to do. And then what the VR program does is it takes your social imprints, anything about you that’s online, and puts all that stuff in the reverie of your choosing. You can create anything. 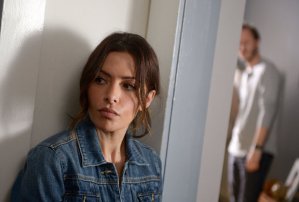 TVLINE | We got a hint in the first episode that inside any reverie, Mara will be haunted by her own dark, past issues. Will that element always be at play?
Yes, it is.

You know, this is an interesting show because it came to me at a point in my life when my father had just died, and I didn’t really have a relationship with him. He was an addict, and abusive, so I spent part of my childhood with my mother in women’s shelters. But when he died, it really threw me — I had this reaction that I never thought I would have. I was surprised, considering our relationship, how much his death impacted me, but after he died I kind of felt him “around me” in a way that I never had when he was alive. I would see and talk to him in my dreams, and through that I was able to find some kind of closure with our relationship. I started looking at things a little differently, and all these sort of esoteric things started happening to me…. I couldn’t relate anymore to the bad-ass POI assassin.

Instead, what was so real in my heart was this immeasurable amount of heartbreak and also the sense that there’s something more to this world than what’s in front of our eyes. There’s got to be another place, a higher dimension, a thing that we go to — and then this [script] fell on my desk. It was just one of those things. As a little girl spending that time in the women’s shelters, there were certain shows that I would watch that would make me feel better, that would take me sort of out of my grief and make my heart feel light. I remember thinking if I ever had the opportunity to do this for another little girl, then that’s what I’m meant to do, that’s my mission. And as I was reading Reverie, I felt like this was my turn to do what I wanted to do ever since I was little.

But to specifically answer your question, yes. The show is like Inception meets Alice in Wonderland with a virtual reality thriller aspect to it, and throughout the course of the show that’s exactly what happens — Mara’s niece does come out, she does start haunting her. Is this the program doing this to her? Is it her imagination? Is this real? Mara really falls down the rabbit hole of crazy towards the end. They really pulled the rug out from under me in terms of the amount of crazy they wanted me to play, which was was very cathartic for me at that point in my life. I felt like I was purging a bunch of things that I was holding onto. 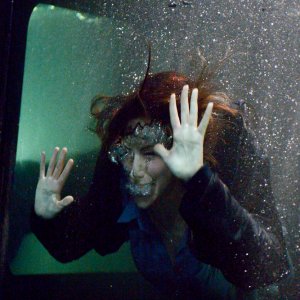 TVLINE | Talk about the larger mythology that the show might explore regarding the tech, its uses and abuses, the recruitment of Mara….
Absolutely, there are some conspiracies regarding the technology. The character that Kathryn Morris plays, she constantly straddles the line between using this technology for good and then abusing it for government purposes. We have an episode, actually, where the military gets involved. They are holding a kid hostage for information in the reverie, so I have to go in…. I mean, look, it’s [produced by Steven Spielberg’s] Amblin, right? Ready Player One made a big splash and similar to how that movie was just such a ride, that’s exactly what this show is. It’s a ride.

When I watch myself, in everything from POI to Fairly Legal to Life, Chicago Fire… it’s like a horror movie, Matt. Like, I just kind of watch with one eye open. But when I watched this, I was on the edge of my seat and I had forgotten that it was me, I was so invested to see what happens next and to take in the visual aspect of it, how it was shot, the lighting, the effects. They really spared no expense to bring really good, entertaining TV.

TVLINE | Have you ever acted opposite so much green screen before?
[Laughs] No, I have not, and that was another reason why I wanted to do this. With each job I try to pick something different that I haven’t done before. POI was about stunts and fighting, and with this one there was a lot of green screen involved, and I’d never done that. The interesting thing that I learned about green screen is that you really have to know exactly what you’re playing off of, you have to know every little detail. If a butterfly flies off of you, you need to know when that’s going to happen so you can react to it. But at the same time, my imagination allowed me to go places that I couldn’t have if I had a real set.

TVLINE | Lastly, speaking of Person of Interest: When does Amy Acker guest-star? Or is that being saved for Season 2?
I would love to have her! Yeah, I guess that’s a Season 2 thing.