As we neared the first anniversary of Linda Reagan’s tragic death on Blue Bloods (as pinpointed by the tombstone Danny visited in the Season 8 finale), showrunner Kevin Wade stood by his decision to kill off the character between seasons, off-camera — even though, nary a Friday night goes by where TVLine doesn’t see a surge in traffic to our previous reporting on Amy Carlson’s exit from the CBS drama. 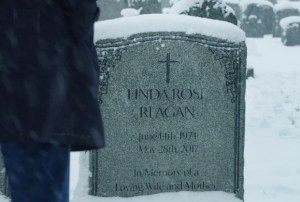 “We were in a tough position there. I was between a rock and a hard place, because the simple fact of the matter was that the actress decided not to renew her contract,” Wade explained during a recent Q&A. “And because [Carlson’s decision] happened after we’d wrapped the previous season, we really had very little wiggle room there, but we did the best we could with a tough situation.”

Given Carlson’s off-season decision to leave the series after seven years, Wade’s options were limited in how to address the character’s sudden absence. So, midway through last September’s season opener, viewers learned that Linda had died months earlier, in a work-related helicopter accident. Starting with his therapy session then, and sprinkled throughout the season, Danny (played by Donnie Wahlberg) and his sons grieved a wife and mother, especially as the place settings for Sunday dinner decreased by one.

Wade believes that, under the circumstances, Blue Bloods crafted compelling material from the tragedy.

“A lot of the Reagan family thing that people seem to be attracted to and want to relate to is the hard, cold fact of people who live with a lot of loss, people who soldier on in a lonely job,” he posited. “They’re together at that dinner table every Sunday because that’s who they go to. These people really need each other.”

In the immediate wake of Linda’s somewhat-confusing, off-screen/between-seasons death, many of the Blue Bloods faithful suggested storylines ideas to bring back the character (from faked deaths to “It was all a dream!”). But short of a resurrection that simply ain’t gonna happen, some wonder if the show might at least flash back to the day she died in the work-related accident — with or without an encore by Carlson.

“We’ve never done flashbacks, and I don’t think I’d start now,” Wade told TVLine. “The audience right now, if they haven’t digested it…. We’re moving on, and I really don’t know that it’s something I could revisit” via flashback.

Rather, he countered, “I think we did revisit it, I hope successfully, with what Donnie Wahlberg played throughout the season, which was loss and regret, some loneliness, and some sense of duty just to carry on for his sons.”