The following story features spoilers from this week’s Empire finale — proceed at your own peril.

In Wednesday’s Empire‘s Season 4 finale, Cookie’s longtime arch nemesis, Anika, perished after tumbling over a balcony and onto (and then into) a glass table below. And klutziness was not the culprit. Andre spiked his ex-stepmom’s champagne, sending her into a drug-induced guilt spiral that began with her seeing visions of the dearly-departed Rhonda (Kaitlin Doubleday in a kick-ass cameo) and ended with her chewing on glass. (Fun fact: The perp and victim — Grace Byers and Trai Byers — are married in real-life.)

And she wasn’t the episode’s only casualty.

At the top of the hour, recovering junkie Tori (Rumer Willis) was rushed to the hospital after relapsing. Just when it looked like she’d pull through, the chanteuse suffered a complication and died. Her passing prompted a distraught Jamal to embark on an Eat Pray Love-ish journey. 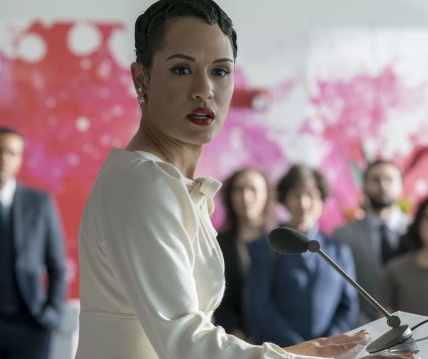 And then in the episode’s closing seconds — just as Cookie and Lucious were getting their holy matrimony on in an understated City Hall ceremony — rapper Blake’s racist dad attempted to assassinate Hakeem as he was traveling with his newly-minted baby mama Tiana. It remained unclear who, if anyone, was struck. (Our guess? Blake — who was also part of the attacked caravan — took the bullet(s).)

On the business front, Eddie won the Empire auction, forcing the Lyons to start from scratch.

Below, showrunner Brett Mahoney weighs in on the two big deaths, Rhonda’s resurrection, Cookie and Lucious’ low-key nups and the Lyon family civil war to come in Season 5.

TVLINE | Why’d you kill off Anika?
I feel like Anika’s storyline had reached its [conclusion]. She achieved what she wanted to over the course of the series, from first wanting Lucious and then just wanting Empire. She got everything she wished for, but it came at a great price. Karma finally caught up with her. She ascended to the throne but then she had to pay for everything she had done in the past.

TVLINE | And then how did you arrive at the decision to have her real-life husband be the one to do the deed — albeit unintentionally?
[Laughs] Obviously, the rivalry between Anika and Cookie was [legendary] and we wanted them to have that moment in the restaurant where Anika finally wins a confrontation with Cookie. But in terms of who she aggrieved the most? It was Andre. She took his wife. Took his kid. And Andre had made a promise to Rhonda to take her down, and that’s what he did. Now, Andre didn’t intentionally kill her. He just wanted to f— up what was going on with that press conference. He wanted to embarrass her. He could not have predicted she was going to die.

TVLINE | What was it like for them to shoot that scene?
They seemed to sort of enjoy it. [Laughs] There was [certainly] no angst. We actually had to film her [big death scene] at a different location from the [press conference], because, due to production and time [constraints], we lost that location. So we recreated it on our stage. So when she actually dies it was shot in a different location and Trai did not have to be there. Of course, he was there because he wanted to see his wife’s last moments [on the show].

TVLINE | When did you decide that the Ghost of Rhonda would figure into the sequence?
We decided that at the same point we decided how Anika would die. We wanted to bring [that arc full circle]. and having Kaitlin there allowed us to bring home the idea that karma is really coming home for Anika. We were very happy we were able to get Kaitlin back for it.

TVLINE | And why kill Tori?
We were searching for the thing that was really going to motivate Jamal to reevaluate his place in the family and send him off on a journey, and [we landed on her] death.

TVLINE | Jussie Smollett is returning next season, right?
That’s not the last you’ll see of Jamal

TVLINE | The shooting at the end of the episode — will it lead to a third death?
I won’t say. I will say that things won’t be the same between the four people that were involved in that.

TVLINE | Lucious and Cookie’s wedding was surprisingly low key. Did you get any pressure from Fox to go bigger with it?
I actually expected that there would be some sort of discussion with the studio and network about that. The debate actually happened in our [writers] room. At one point, I think it was actually scripted that they go down to City Hall to get married but then they [call it off] and decide to do something really big. So we were going to come back sometime in Season 5 and build up to some huge wedding. But when you think about it in terms of what happened in the Season 4 finale, with them planning to go travel the world and then the car explodes and it stops them, I just wanted to complete the cycle [this time around]. They said they’re getting married. They said they’re in love. I just wanted to complete the act. Some of the younger writers wanted a huge wedding, and the older writers were going, “No, realistically, with this couple, they would just go and get it done.”

TVLINE | Is it safe to say the early part of Season 5 will focus on the Lyons building a new Empire?
Yes. But i think it’s going to be a much more difficult process that Cookie thinks it’s going to be. And it’ll tear at the relationship between Cookie and Lucious and the boys, in terms of trying to achieve that goal.