Going into Tuesday’s Season 14 finale of The Voice, the question seemed to be less “Who’s going to win?” and more “Was Kyla Jade or Brynn Cartelli going to win?” (Which was still more suspenseful than the ending of Season 13, since a victory by Team Blake’s Chloe Kohanski had been a foregone conclusion well ahead of the finish line.) Before Monday’s performances, I’d been pretty sure that Team Blake’s Kyla was a lock to take the title. She had the pipes, the charisma, the momentum. But then her original song had the same effect on me as Tylenol PM, and both Brynn’s original and her “Skyfall” cover sold better — and Britton Buchanan’s self-penned “Where You Come From” beat ’em all on the iTunes chart. So as the Results Show began Tuesday night, I didn’t know what to think. Was Team Alicia’s baby-faced Springsteen about to come from behind to steal the crown? Read on, and we’ll go over the evening’s performances on our way to revealing Season 14’s winner.

Britton Buchanan, WILKES, Christiana Danielle, Jackie Foster and Mia Boostrom, “In the Air Tonight” | Kind of a so-so opener. The harmonies that the group went for weren’t really there, the team-up mainly made me miss WILKES and Mia Boostrom all over again, and WTH was up with Jackie’s mic? The show does do dress rehearsals of this stuff, right?

Dua Lipa, “IDGAF” | Once I got past the diaper-y oddness of the cut of the hitmaker’s short-short-shorts, I thought this was pretty good. Insanely catchy, and she didn’t just sing well, she sang with a distinctive voice and enough attitude for three people. (Future Voice contestants, take note.)

Spensha Baker (Team Blake) and Kane Brown, “What Ifs” — Spensha’s grade: C | As Spensha chimed in on Kane’s hit, it seemed like a mismatch. The more I listened to her single “Old Soul” today, the more I loved it. But this… it was just too country-rock for the country-soul singer. She was better on the choruses, but why have her sing a song in the finale that doesn’t play to her strengths?

James Bay and Alicia Keys, “Us” | Embarrassing but true: When Carson Daly announced that James Bay was up next, I expected James Blunt. (I really need to get out more.) In any case, the song was cool as hell, both he and Alicia sounded great, and good Lorde, could his cheekbones be any sharper? You could slice cheese on those things! 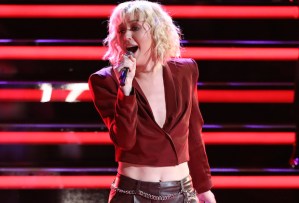 Chloe Kohanski, “Come This Far” | The new single by Season 13’s winner did a totally tubular job of encapsulating that ’80s throwback sound that she always said she wanted to make her own. It was kinda like Blondie thrown in a blender with Garbage and Pink. And though I’m by no means a big Chloe fan, even I liked it. To my surprise, a lot.

Brynn Cartelli (Team Kelly) and Julia Michaels, “Issues/Jump” — Brynn’s grade: A- | This was weird in the best possible way — when Adam Levine’s Battles adviser and Brynn started singing back and forth at each other, they sounded crazily alike. And actually, Brynn sounded better here, more confident, than she had on her insanely catchy Michaels-penned single “Walk My Way” Monday. These two should work a lot more together. Great pairing of songwriter and singer.

Kyla Jade, Johnny Bliss, Rayshun LaMarr and Sharane Calister, “Killer/Papa Was a Rolling Stone” | Top to bottom, this was pretty smooth — though again, there were mic issues, this time with Rayshun’s. Get it together, people! Interestingly, none of the former contestants were able to take advantage of this opportunity to make us (or at least me) say, “Yeah, [insert name here] should still be in the competition instead of Kyla.” She radiated cool confidence. 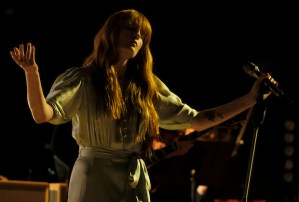 Florence + the Machine, “Hunger” | I kid you not, I was listening to F+TM in the car today. This very song. I am fairly obsessed with them, so it was wonderful to discover that Florence sounds every bit as amazing live as she does in recordings. She’s everything I think Shana Halligan wants to be but just isn’t. And how in the world did she manage to sound so perfect while doing more running around than I do in a week’s worth of jogs?

Britton Buchanan (Team Alicia) and Ryan Adams, “To Be Without You” — Britton’s grade: C | I’ve liked a few Ryan Adams songs over the years (and love his “Style” cover), but I’ll be damned if I knew that was what he looks like. I learn so much from Voice finales, I swear. #themoreyouknow Britton should have sounded terrific here — the song seems very right for his voice. Yet, as he did on his excellent original song yesterday, he sounded just a little off. I’m gonna blame the sound engineering. If the show can’t even figure out when to bring up the lights on Carson, it’s probably safe to assume Britton couldn’t hear a note he was singing in his earpiece.

Halsey feat. Big Sean, “Alone” | Holy crap, could they have fit more backing dancers on stage for this number? Wow. Love the sexy sway of the song, but I could do without the vocal affectation of Halsey’s that makes it sound like she’s a 33-1/3 record being played at 45 rpm. (Look it up, kids.) Although I did kinda get used to it before the number was through. Must download this.

Jason Aldean, “Drowns the Whiskey” | As you’d expect from a country superstar, the vocal sounded as good as a dinner bell when you’ve missed lunch. But there wasn’t a whole lotta personality going on during this performance, was there? Suddenly, I wanna go back and be a whole lot nicer about Kaleb Lee. 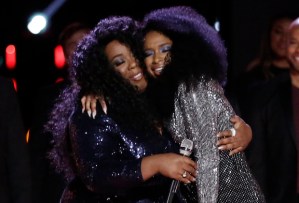 Kyla Jade (Team Blake) and Jennifer Hudson, “I Know Where I’ve Been” — Kyla’s grade: A | Credit where credit is due — it takes serious chops to sing next to JHud and not sound “less than,” and Kyla sounded very much the equal of the superstar for whom she used to sing backup. Yes, JHud grabbed every opportunity she could to upstage Kyla, and still, Kyla managed to shine. Well done. And tsk, JHud; let the woman have her damn moment!

When at last we got the results, it was…

So, are you satisfied with the results? What did you think of the finale overall? The season? Vote in the polls below, then hit the comments.