In The Flash‘s Season 4 finale, Barry (literally) got inside The Thinker’s head, in a last-ditch effort to save the world’s collective noodle from The Enlightenment. Which unexpected ally wound up helping Team Flash in this cause?

As The Enlightenment’s launch buries Central City in darkness and disables cars/machines with EMP-like efficiency, Cecile senses she is about to go into labor at S.T.A.R. Labs, where Caitlin is poised to brush up on her med school childbirth skills. Iris arrives on the scene with Marlize, who is not only willing to help Team Flash but already has an idea to “send” Barry into her husband’s mind, on a mission to track down the bit of good still left in the mad scientist. (Cisco is quick to question the plan, suggesting they instead recruit Kara, Oliver or Wally for the fight, but Marlize explains that Clifford amassed the metas/powers he did so as to be able to swat back whatever superheroes are thrown at him.) 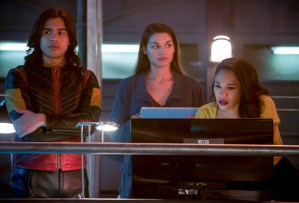 To execute Marlize’s idea, they need Cecile and her powers to act as a bridge of sorts, for Barry’s consciousness. Cecile is game, so Barry hooks himself up to The Thinker’s chair, with Cecile nearby on a gurney, Harry’s inhibitor attached to her forehead. As the two of them close their eyes, Barry finds himself spat out at the location of the meta bus incident, where he eludes a floating DeVoe. Cued to check out the DeVoes’ house, Barry finds it empty — just as Cecile starts feeling contractions back at the lab. Marlize explains, arguably a bit late in the game, that if Cecile needs to get that baby out of her, she will in turn lose her acquired meta powers — and thus potentially strand Barry inside DeVoe’s mind. When Caitlin goes to soothe Cecile, the expectant mom grabs her arm and growls, “I found Thomas; he’s been this way all the time” — which would seem to be a new clue to Killer Frost’s surprisingly early origin, as suggested by last week’s flashback to Caitlin’s childhood. Or, it’s a most unexpected Maze Runner crossover. Let’s assume the former.

When Harry disappears, Cisco finds his frustrated friend eyeballing the “thinking cap” that, as DeVoe orchestrated, served up a “test run” of The Enlightenment. Harry insists he wants to “help,” and once Cisco begrudgingly slips the helmet back on and powers it up, Harry blurts out the suggestion that Barry go to where the DeVoes fell in love, on that hill in Oxford. Beside the picnic blanket, Barry finds not “good” DeVoe but… Ralph Dibny?! Turns out that DeVoe needs his most recent host alive in some form, to keep his shapeshifted form motoring along. That’s when DeVoe himself floats onto the scene to scoff at Barry’s endeavor, promising that The Flash will not beat the Big Bad this time!

Back at S.T.A.R. Labs, Cecile’s contractions “disconnect” the team from Barry, just as DeVoe arrives to taunt everyone and explain how them putting Barry in his mind was the plan all along. That’s why he never chased after The Flash’s powers, because now he will have access to the Speed Force, time travel and all that jazz. Before DeVoe can get stung by another Iris barb or gloat any further, Marlize whisks the team into a pocket dimension, landing them in her old lair to hide out. Barry meanwhile turns to Ralph for ideas, and they decide to search for good DeVoe as a young professor… only to find him slumped over in a lecture hall, dead. Ralph urges Barry to get out while the getting is good, but Barry refuses to. Instead, he gets the idea for Ralph to lob himself into the the nexus of DeVoe’s mind, located in this alt dimension where the Speed Force spat Barry out, and thus regain control of his body. 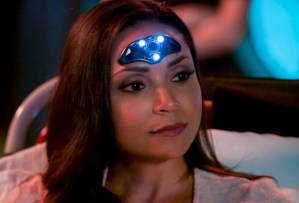 Returning to downtown Central City, Barry and Ralph are met by DeVoe, and find themselves on the receiving end of beat-downs, seeing as their foe can read their thoughts/moves. Ralph thus suggests they “do it Dibny style,” meaning fight without thinking, and the maneuver works. When DeVoe multiplies himself into a small army, Barry fends them off by swinging Ralph around like a battering ram. When yet more DeVoes storm the street, Barry and Ralph plow their way throng the throng of Thinkers, making a beeline for the nexus point, while back at the lair, DeVoe tracks down Team Flash and “freezes” every one of them, then targets Cecile…. In the chair, Barry comes to just in time to whale on DeVoe again and again, until the mastermind concedes, “You beat me” — to which Barry counters, “I didn’t; we did.”

Ralph reclaims control of his body/puts his face back on it, but we haven’t quite seen the last of DeVoe, Rather, he resurfaces as a “technological reincarnation” — his final “hail Mary” — but Marlize promptly pulls the plug on the hubs, only to realize a “dead man’s switch” has in turn sent the S.T.A.R. Labs satellite plummeting, in large, fiery pieces, toward Central City! After Team Flash rescues people from the assorted impacts, Barry builds up his speed to race up a building and explode the satellite body with a sonic punch. When his first try comes up short, he gives it another go, this time accompanied by a path of purple/yellow lightning, as a second, unseen speedster helps him KO the satellite….

In the aftermath, Marlize offers a gizmo to get Harry’s mental mojo back, before declining an offer to join Team Flash (booooooooo!!!!) and instead return to the Peace Corp to help the helpless. When Harry uses Marlize’s tech to re-zap his bean, it only gets the job somewhat done — he’s once again loquacious Harry, he’s just not nearly as brilliant. Cisco is frustrated, but it’s enough for Harry, who seizes the moment to return to his Earth and be with daughter Jesse. 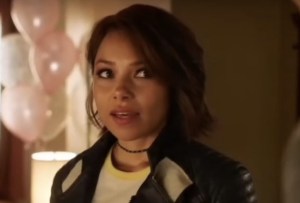 Convening at the West house for a celebration — complete with surprise guest Wally! — Cecile and Joe arrive with newborn Jenna. That sparks an amusing “We’re next” misunderstanding between Barry and Iris, which is interrupted by a knock at the door. It’s… the Mystery Girl, whom everyone recognizes from Jitters, the wedding etc. But why is this stranger wearing Iris’ one-of-a-kind speedster jacket?

“I’m your daughter, Nora, from the future,” the girl explains, “and I think I made a big, big mistake.”

What did you think of The Flash‘s Season 4 finale?