Warning: The following contains spoilers (and not the ones you’d suspect) for Sunday’s shocking Fear the Walking Dead.

OK, Sunday’s Fear the Walking Dead hurt. Twice over, in fact, it hurt. Bad. But on the plus side — and there is one — “Just in Case” was another excellent episode, further proof that under its new showrunners the Walking Dead offshoot has turned a corner and gone from being a sometimes-pretty-good show to an always-crazy-good show. Read on, and we’ll go over the latest whys. 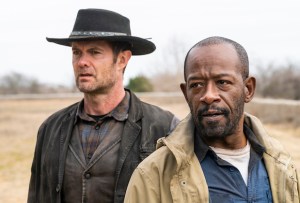 ‘I’M QUICKER THAN YOU ON MY WORST DAY’ | As the hour began, John got the drop on a Vulture who’d just gotten done cleaning out a fast-food joint with an efficiency that would have impressed the Grinch. Rather than heed Morgan’s advice to answer the sharpshooter’s question and drive off into the sunset unscathed, the blinged-out villain went for his gun and got a finger — no doubt his itchy trigger one — shot off. Upon finding directions to the Vultures’ next rendezvous point, John came close to losing it as he demanded to know what had happened to Naomi. In the nick of time, Morgan intervened, letting the baddie go and warning him that Alicia, Lucy and Strand planned to ambush his flock if they showed for their next meet-up. Afterwards, John, shaken by how close he’d come to murdering the guy, gave Morgan his guns “for the time being, just in case.” And Morgan… he seemed to think that he and John could stop Alicia, Lucy and Strand, and after that, the Vultures would cheerfully answer John’s questions about Naomi’s fate. Speaking of Alicia, Lucy and Strand, at that very moment, they were being driven to the rendezvous point by Al, who was quick to shoot down any suggestion of her cooperation in their attack. “My guns aren’t for hire,” she said, “and my bullets aren’t for sale.” Doubtful, Strand wondered aloud if she could really stand by and merely observe as it happened. It wouldn’t be the first time, Al insisted. 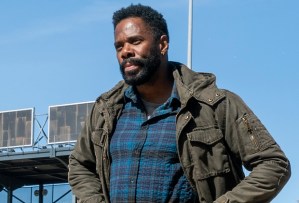 ‘A SLICE OF PROCESSED HAM DOES NOT A MEAL MAKE’ | Flashing back to “BEFORE,” Lucy remained curious about how Strand had happened upon a car full of food. Since Cole still didn’t rat him out, Victor thanked him. In turn, Cole thanked Strand — for showing him who he was before he’d wasted any more time trying to get to know him. Oh, and he hadn’t kept Strand’s secret as a favor or anything — he was just afraid of how Victor might retaliate if he revealed the truth. (Ouch. Fair, but still… ouch.) When Madison asked what that had been all about, Strand deflected, saying that the hungrier people got, the more irritable they got. She didn’t have any food, but she had found some booze. During their ensuing Unhappy Hour, he finally asked why, after his treachery, she’d saved him following the dam explosion. “‘Cause I know who you are, Victor,” she said. “That, and I really like drinking with you.” Just then, a fracas erupted nearby: Naomi was making a run for it. But not really, she insisted. She was heading out to a FEMA shelter where she’d once lived in hopes of finding seeds and maybe some military rations. She didn’t tell anyone because it was dangerous. In that case, she certainly couldn’t go alone, Madison said. She and Strand would tag along. 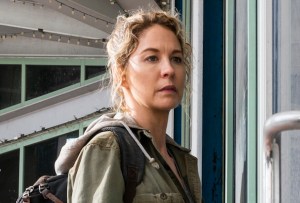 ‘PEOPLE DON’T CHANGE’ | After a day of driving, Madison, Strand and Naomi holed up in the office of a motel for the night. And as post-apocalyptic lodgings go, it wasn’t half bad — the vending machine was still pretty well-stocked. The rough part was making small talk. Naomi almost visibly retreated into herself when asked about her time at the shelter. “I don’t really wanna think about that,” she whispered. “You should just trust me.” Eventually, she admitted that she hadn’t just been going for seeds when she was caught leaving the diamond, she’d been going, period. She had, however, left behind a map to the shelter, in case others wanted to come. Why would she leave? “Because she’s a coward,” snapped Strand before demanding that she hand over the keys to the truck. In her defense, “I didn’t have to tell you,” Naomi pointed out. But Strand wasn’t having any. What were he and Madison supposed to do, thank her for telling them who she really was? (Man, Cole’s words couldn’t have gotten any more under Strand’s skin if they’d been ticks.) The following morning, Madison woke up to find Naomi gone. While she snuck into the shelter, which was full of walkers, Strand argued to Madison that some people couldn’t be saved. To make his point, he admitted that the truck full of supplies had been his getaway car. What did he want her to say, Madison asked — that she should’ve let him drown? “That’s what I would’ve done,” he replied. Well, luckily for him, she’s isn’t him. (Score one for Madison 2.0.) 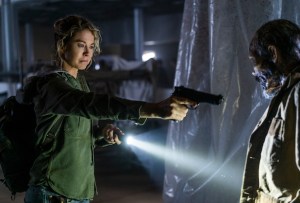 ‘IT HAD TO BE ME’ | At the shelter, Naomi passed one painful reminder of her past (a baby crib) after another (a kid’s drawings) before finding what she was looking for: a notebook full of instructions on everything from first aid to gardening, and a set of keys tagged with the initials JIC (guess what those stand for). On her way out, she came across a spot that was too crushing to bear the sight of, and accidentally made enough noise to draw the walkers. She made a run for it, but at this point was breaking down so badly that she couldn’t bring herself to shoot. Instead, she climbed a scaffolding and sat down inches away from hungry death. “I’m so sorry,” she sobbed. When Madison and Strand arrived, Naomi told them she didn’t want their help; there was a truck on the loading dock with everything they’d need to execute Nick’s Project Replant. But, of course, Strand and Madison wouldn’t leave her there, and through a tag-team effort, they managed to get her to safety. Only then did Naomi explain why she’d had to go there alone. After the world had turned upside-down, she had thought that the shelter would be someplace where she could keep daughter Rose from meeting the same fate as her father. There was even a woman named Ellen there who taught JIC — just in case — classes on all kinds of preparedness. But then Rose became ill… 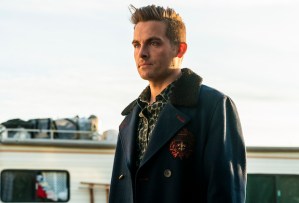 ‘I DID THIS’ | In no time, the little girl’s cough had turned into pneumonia. Fearing that they’d be kicked out if the group learned how sick Rose was, Naomi endeavored to sneak out and return with antibiotics before anyone was any the wiser. Unfortunately, she’d only been gone one of the three days of her mission when Rose died. And turned. And, in turn, turned everyone else. Naomi had hoped to find a way to live with what she’d done, she added, by helping Madison keep the diamond going. (Again, beautiful work by Jenna Elfman. Like, damn, she’s good!) Outside, the JIC truck was ready to roll — well, after a zombified Ellen was dispatched, anyway. Having heard Naomi’s story, Strand reassured her that she’d only been doing what life had seemed to be telling her to. “I did, too. But this one,” he said, gesturing toward Madison, “she taught me we could start over. We all can.” When the trio returned to the diamond, lifeline in tow, Mel finally threw in the towel and ordered the Vultures to pack up. But he didn’t leave without giving Madison one last warning: “The really bad stuff,” he said, “ya never see coming.” And man, was he ever right there! Inside the stadium, Strand told Cole that he might have been premature in telling him who he really was. Really, Victor should have had Madison do it instead, he reckoned, since she knew him better than he knew himself. Though Nick, Alicia & Co. were all relieved that the Vultures had flown the coop, Madison couldn’t breathe easy: Smarting from Strand’s revelation, she told her daughter to secretly fill a Land Rover with rations, medical supplies and rifles “just in case.” 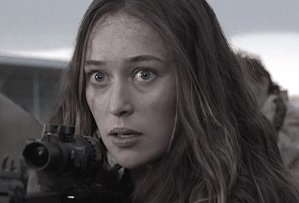 ‘YOU AREN’T GONNA LIKE THIS’ | Back in the “NOW,” Alicia, Strand and Lucy were surprised when only one vehicle pulled up at the Vultures’ rendezvous point. Aw, hell, it wasn’t even the Vultures, it was John and Morgan. Livid, Alicia, Strand and Lucy had the buddies kneel on the ground at gunpoint. No sooner had John futilely appealed to Al to calm the situation down than Morgan made it worse by admitting that the Vultures weren’t coming because he’d warned them not to. “Bad idea,” spat Alicia. As Morgan tried to tell the trio mourning Nick that they didn’t have to seek vengeance, it would hurt things, not help them, up rolled… uh-oh. The Vultures en masse! After Mel thanked Morgan for giving them the heads-up, he told Alicia that he was sorry about her brother. “I’m not sorry about yours,” she replied. Again, Morgan tried to convince the warring factions to give peace a chance, but all Alicia or Mel really wanted was for him to get out of the damn way so that they could open fire on one another. Just then, Naomi sent a “Where are you?” message over Mel’s walkie-talkie, and he realized that Alicia & Co. had yet to realize she was with them. They soon would, though. Very soon.

Seconds later, up rolled the Land Rover. “Where the hell did you get that?” Strand asked the Vultures. The terrible answer: Naomi was driving it! For an instant, John and “Laura” were reunited, but then an enraged Alicia shot him in the chest in cold blood. Was he alive? Dead? Somewhere in between? Had Alicia been aiming for Naomi? We couldn’t be sure of anything except that our jaws hurt from hitting the floor twice in such quick succession. So what did you think of “Just in Case”? John can’t be dead, right — not after he and we just learned that Naomi is alive? And lastly, how amazing has the show gotten? Hit the comments.