And so they all lived happily ever after — some, in death.

ABC’s Once Upon a Time this Friday night wrapped its seven-season run by having the heroes thwart Wish Rumple’s plan to damn them to isolated, unhappy endings, in large part thanks to our Rumplestilskin’s decision to rip out his own heart — thus finger-snapping his wicked other — and using it to replace his “friend” Wish Hook’s poisoned ticker, plus Regina bravely convincing Wish Henry not to slay her.

Regina then got the idea to use the bones of the original Dark Curse to craft a new one that would unite all of the realms within Storybrooke’s apparently super-elastic town line. Zelena later escorted her sister to a surprise coronation ceremony, where the formerly Evil Queen was pronounced “The Good Queen,” by her onetime arch enemy Snow White.

Along the way, Regina during a very low point got a needed pep talk from her late love Robin Hood; Robin got Wish Hook’s blessing to propose to Alice; Rumple in death reunited with Belle; and Emma, Hook and baby Hope were comically tardy for the coronation party.

TVLINE | Our Rumplestiltskin was the series finale’s lone main casualty. Was the decision to kill him off tempered by the fact that it reunited him with Belle?
EDDY KITSIS | It wasn’t a difficult decision at all because we felt like the goal for him was to rejoin Belle, and what we loved about it is that’s what a happy ending is. What we were trying to communicate to the audience thematically is that it’s not about the happy ending, it’s about the journey and who you’re taking it with. Rumple got his actual happy ending, because he fixed his heart. For everyone else, the adventure continues — we just won’t be able to see it every week. 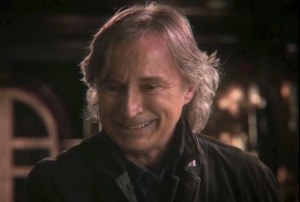 TVLINE | And the way Rumple got there was so magnanimous and slightly ironic, giving his heart to a Hook and everything.
KITSIS | That was exactly what we planned. These two spent their whole lives killing each other, so we loved the idea of Hook finding out that Rumple thought of him as his friend. We know that he was already a father figure to Alice, so we loved the idea of that selflessness, because it showed us that Rumple really had redeemed himself. It was one of his most pure moments.
ADAM HOROWITZ | We loved the idea of two characters who were always trying to destroy one another ultimately saving one another.

TVLINE | The “friend” scene was remarkably effective, especially with all the CGI snow whirling around them. Bobby [Carlyle]’s words just cut through that and really got to me.
KITSIS | Bobby is magnificent.

TVLINE | Just make me feel better about Rumbelle, that they’re not going to get lonely and sad there in their foggy world.
KITSIS | No, they’re going to be very happy. They have all the time in the world to just be happy now.

TVLINE | And where in your mind is their son Gideon now?
HOROWITZ | He’s off starring in fan fiction.
KITSIS | Gideon, as we know, went to school and he’s lviing his life in another realm. He’s got his parents in his heart and he is off doing good for the world. 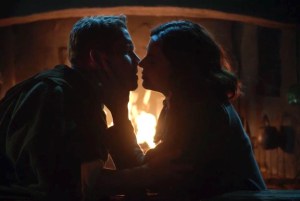 TVLINE | Talk about putting together that Outlaw Queen “reunion” scene. Because like the dialogue said, it was short yet super-powerful.
KITSIS | Listen, we wanted this last run [of episodes] to be the last chance for the audience to, as we say, “hear the song sung one more time,” so it was really important for us to see the original Robin and not Wish Robin. Robin was not the first step toward Regina redeeming herself, but he was a really great supporter of it. And in a time of need, we love the idea that he came through for her when she needed him the most.

TVLINE | Well, along those lines, what moments from the two-hour finale give you a goofy grin each time you just think about them?
KITSIS | Henry being saved by Snow and Charming in the knight costumes; Rumple telling Alice “you dont do the right thing for the reward, you do it because it’s right,” and him telling Hook that you’re my best friend. I also love Robin asking for Hook’s permission to ask Alice to marry her. And Regina’s speech at the end, including her interaction with Emma, always gets me.
HOROWITZ | I would agree with all that and add the ending sequence where all of our characters for the most part are there. When Emma arrives, it’s the culmination of that family. The whole thing for me was the mixture of a goofy grin to see so many of our characters together, and the emotional feeling of, “Wow, I’m also seeing them for the last time.” 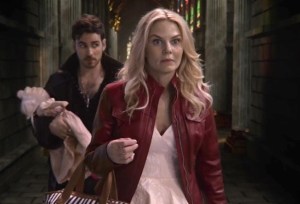 TVLINE | How did Emma’s arrival/the “Sorry, I’m late” callback come about? Because that was fantastic.
KITSIS | We always love a good callback, and we loved that [the series] opened with a wedding and we were ending with a coronation. The whole show started really when the Evil Queen came in and cursed them, so we loved the idea of Emma saying it in a new way, which I think is what this show was about. In the beginning, the Evil Queen was evil, Snow was this, and in the end, everything wasn’t what we thought it was. It showed the growth of the show. 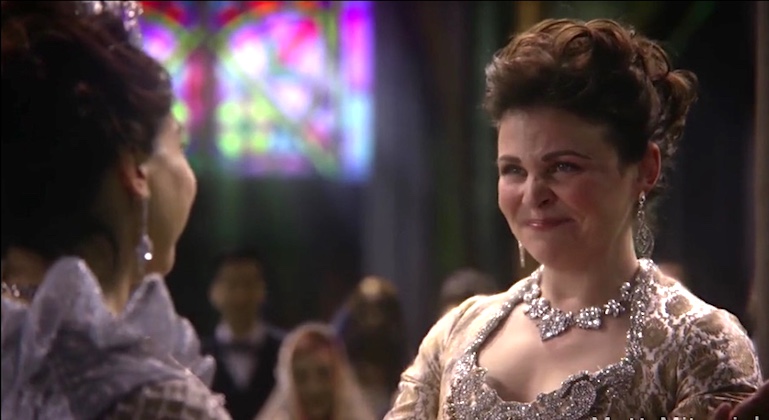 TVLINE | In that same sequence, Lana told me that Ginny got so emotional that she was crying even when she wasn’t supposed to. And I could tell just watching.
HOROWITZ | It was super-emotional being there when it was shot.
KITSIS | Ginny sent me a text after she read the script that said, “I can’t stop crying. It’s so nice you gave the Evil Queen her happy ending.” That’s why working with someone like Ginny is so great; she is just as much a fan as everyone else.
HOROWITZ | The whole experience of shooting that last scene was emotional for everyone, also because it was the last time that some of those actors were playing those characters. When those scenes finished, we were wrapping them forever, and that landed on everyone.
KITSIS | There was a moment when we wrapped Bobby at like 2 am, but his stand-in was still there dressed as Rumple. When I saw him in front of me, I realized Bobby was gone and I started crying. I just lost it on set.

TVLINE | Adam, I saw you on set for the finale, and I feel like one of the scenes we saw being prepped didn’t make it, with Hook, Robin and Tilly on Granny’s porch.
HOROWITZ | The scene is there briefly at the end, when we cut back to Storybrooke and see the [Henry on the] horse riding down Main Street. There initially were a couple of lines where they say that they’re heading somewhere, to set up the mystery of the coronation.
KITSIS | All it was was Wish Hook saying to Henry, “Did you get it?,” meaning the crown.

TVLINE | Any keepsakes on your way out the proverbial door?
HOROWITZ | Not as far as Disney knows!
KITSIS | We are the proud possessors of the Dark One dagger…. Henry’s book… maybe a leather jacket or two….

TVLINE | And a couple of tiles of CGI flooring.
KITSIS | No, but we have so much Once stuff over the seven years that were are surrounded by it, but it’s comforting.

TVLINE | Lastly, do you have any regrets? Perhaps that you didn’t lock down the swirly fire visual effect for the portal at the very start?
KITSIS | That could be one….

TVLINE | Do you have your Jack’s Tattoos episode?
HOROWITZ | As far as regrets for the show, I say we don’t have any — and by that I mean that there are things we did that we think are great, and things we would have improved or done differently, but it was all a process. The learning experience helped us get to the things we did get to. Part of the message of the show was the message of ø the show, which is it was all about the journey. I wouldn’t trade all the ups and downs for anything.