The bad news for Blindspot‘s Jane Doe: Her memory’s been wiped. Again.

The good news for Blindspot‘s Jane Doe: Instead of waking up naked in a duffel bag, she came to in a hospital room this time, wearing a patient gown. Baby steps!

The NBC drama wrapped its third season Friday night with yet another game-changing episode, the final moments of which introduced Jane as a potential villain ahead of the series’ already-ordered fourth season. A brief recap of what went down:

Throughout the hour, Jane is repeatedly stopped in her tracks by awful headaches and overwhelming fatigue, which cause her to pass out on the job. She initially suspects she is pregnant, but a second collapse later in the episode reveals a much more sinister cause of Jane’s symptoms.

As Patterson explains to a heartbroken Weller, Jane’s body is being poisoned by ZIP, a memory-altering drug that Sandstorm flooded her with before she was shoved into that duffel bag three years ago. The longer ZIP is in Jane’s system, the worse her symptoms will become: It won’t just be the headaches and dizziness, but major memory lapses and potential brain aneurysms, too. Roman has tried to track down a cure — he’s been suffering from the ZIP poisoning, too — but Jane’s current odds of survival aren’t promising.

Jane then wakes up alone in her hospital bed, seemingly confused by the tattoos on her skin and the wedding band on her finger, among other things. She rushes to a payphone in the hospital’s hallway and makes a stunning call: “Hobbes, it’s me. It’s Remi. I’m in a hospital, and I’m missing time. I’m missing a lot of time. I need to talk to Oscar, or Roman, or Shepherd. From what I can tell, I’m still undercover with the FBI, but I can’t remember anything. I don’t know if I’ve been compromised. I need help.”

Moments later, Jane is brought into another recovery room, where Weller is clinging to life between surgeries — the result of a complication from a gunshot wound he had suffered earlier in the episode. She is greeted by the rest of the FBI team, none of whom seem to pick up on her strange behavior, and sits by Weller’s bedside. We see a quick flashback of Jane — er, Remi — talking to Shepherd at least three years ago, as they look at a board full of photos and intel about Weller & Co.

“Are you sure this will work?” Shepherd asks. “I’m positive,” Remi replies. “I’ll infiltrate their ranks, get them to trust me and then I’ll rip them apart from the inside.” We return to the present day, and Remi gives a wicked smirk as she watches an unconscious Weller.

According to series creator Martin Gero, Jane’s major memory lapse will be the centerpiece of Season 4 and will drastically change the nature of the show. In fact, “this isn’t Jane,” Gero clarifies. “Jane has lost the memories for the last three years of her life. She’s woken up as Remi, her evil alter ego… and Remi hates the FBI. Has and always will.”

And even though Blindspot‘s last three seasons have seen Jane and her team taking down baddies, she will be the adversary when the series returns, Gero confirms.

“Remi is one of the main bad guys for the beginning of Season 4,” he tells us. “Her plan was always to infiltrate and destroy them, and now she’s back and the team’s in a lot of trouble. She’s going to use the fact that everyone thinks she’s Jane and try to get her old plan back in motion.”

Read on for Gero’s insights about the finale’s other big events: 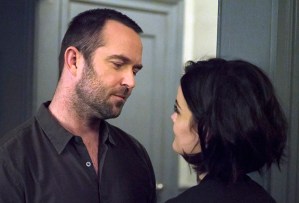 THE FALL OF THE ROMAN EMPIRE | Roman, Jane, the FBI team and Hank Crawford all met up in Cape Town, South Africa, where Roman intended to end the cat-and-mouse game with his sister once and for all. Jane was ultimately the one to kill Crawford — in the very orphanage where she and Roman grew up, which Crawford built! — but Roman didn’t get his happy ending, after all. He met up with Blake later that afternoon, and even though he wanted to finally spill all of his secrets to her, he never got that chance. Blake shot her boyfriend, revealing that she knew his real name was Roman and that he had committed some real atrocities. “Did you love me?” Roman asked after taking the bullet. “How could I? I never knew you,” Blake replied.

Jane found Roman as he was bleeding out, and the two shared a lovely, apologetic moment before Roman died. “Sadly, we always knew that Roman had to die at the end of this season,” Gero says of the pivotal death. “As the mastermind of these new tattoos, his allegiance to one side or the other was just too powerful.”

But there’s reason to believe Luke Mitchell could return next season via flashbacks. Not only does Remi assume that Roman is still alive, but, before he died, Roman left Jane with a gift: a USB drive that contained even more clues about Jane’s remaining tattoos, plus some fragmented medical data that could eventually lead Jane to a cure for the ZIP poisoning. And there are more drives just like that one — hidden all around the world.

“We love Luke Mitchell and are as gutted as you are that the character had to die,” Gero admits. “But hopefully this isn’t the last you’ve seen of [him] on Blindspot.”

WHO RUN THE WORLD? | After getting gunned down by his girlfriend, Roman asked Blake who told her the truth about him. “Someone I trust,” Blake answered… and we later learned that someone was Zapata. After being terminated from the CIA — and subsequently ending things with Reade as quickly as she started them — Zapata apparently found a new purpose in life, and Blake will help her fulfill it. “This is how we take the power back,” Zapata calmly told Blake. “This is how we change the world.”

Gero confirms that Zapata and Blake’s team-up will be a major focus of Season 4, and the two women could very well make a formidable pair.

He teases: “With [Zapata’s] help, Blake hopes to step up and run HCI Global, her father’s company — and, well, basically rule the world.”

OK, your turn! What did you think of Blindspot‘s Season 3 finale? Grade the episode in our poll below, then hit the comments with your reactions!