Whoa there, friend: This recap spoils the events of 13 Reasons Why’s season premiere. Haven’t watched? Get to streaming!

Take note, teens: Dangerous things come in groups of 13. Those cassette tapes were just the beginning.

But good things also come in 13s, like the episodes in Season 2 of Netflix’s 13 Reasons Why, which dropped Friday in the wee hours of the morning. Speaking of which, if you’re reading this article at the time of its publication, you either stayed up late or woke up early to get your fix of Hannah Baker drama. Whichever the case, you’re merely at the start of a journey that gets deeper and darker than anything Liberty High School has ever seen. 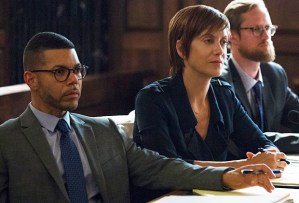 The premiere picks up five months after Hannah’s suicide, but were it not for a few changes — one of which being Mrs. Baker’s single-lady pixie cut — I’d also believe that no time had passed. A dark cloud of unresolved issues continues to loom over everyone in the Bakers’ orbit, exacerbated by them taking their daughter’s school to court.

In fact, the Bakers’ lawyer’s opening remarks in the premiere serve as a pretty consistent blueprint for the rest of the season: “Each day in this trial, you’re going to hear testimony from students who knew Hannah Baker at Liberty High, from adults at Liberty, from Hannah’s own parents. You’ll hear about a girl in crisis, a poisonous school culture and an administration that could have averted a tragedy, but didn’t.”

Tyler is the first to take the stand, painting Hannah as a kind-hearted girl who befriended him when others chose to look the other way (if he was lucky). But he also recalls their friendship taking a dramatic nosedive when that infamous slide photo began circulating around school. And in a refreshing display of honesty, he also admits to taking pictures of Hannah through her bedroom window. He still can’t understand why she would be sexting “with just some guy.” (Because, you know, the person stalking his crush from a tree should totally judge her behavior.)

Having helped out Hannah’s cause by telling the truth in court, Tyler feels pretty good — until he discovers pictures of himself (with his eyes scratched out!) in his darkroom. And what would a series of chilling photos be without an equally chilling threat: “You ain’t seen s–t.” 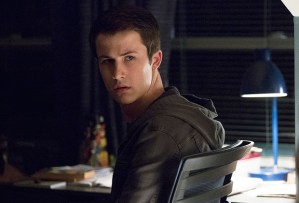 Speaking of seeing things (or not), Clay is pretty sure he’s losing his mind when he starts seeing the dearly departed — specifically in place of new-ish girlfriend Skye when they’re in the throes of awkward teenage passion. Of course, hallucinating a dead friend isn’t the only thing interrupting Clay’s intimacy with Skye; he also displays understandable concern when he suspects that his girlfriend might be cutting again.

Meanwhile, Alex — walking with the assistance of a cane and experiencing cognitive difficulties as a result of his suicide attempt — returns to school with Jessica, who’s devastated to discover that Bryce rewrote their story in her absence; rather than a rape victim, her classmates (and the blow-up doll she finds on her doorstep) see her as a “slut” and a liar. All of the above is made even more complicated by the school’s ludicrous new rule: Any talk of Alex, Hannah or suicide in general puts a student at risk of suspension.

Naturally, those are the only topics Alex wants to talk about, particularly since he can’t remember enough about what happened to even make sense of his suicide note. One line haunts him above all others: What did he mean by “I could have stopped it”?

While Alex grapples with that mystery, Clay is handed one of his own: a polaroid of Bryce in what appears to be a very compromising position with an unidentified female. (Girl? Woman? I don’t even know.) And on the back, a chilling sentiment: “Hannah wasn’t the only one.”

Thus, a new mystery is born.

Your thoughts on 13 Reasons Why’s long-awaited return? Grade the premiere below, then drop a comment with your full review of the episode.