Tonight’s season finale of The Blacklist (NBC, 8/7c) will pull a literal skeleton out of Raymond Reddington’s closet — or duffel bag, as it were — as viewers finally learn the identity of those pesky bones Red has been pursuing.

But if you’re an eagle-eyed Blacklist viewer, it’s possible you’ve already deciphered to whom those bones belong. After all, series creator Jon Bokenkamp says, the NBC drama has been dropping hints throughout Season 5 about the unlucky soul inside that bag.

“In a way, I sort of hope [viewers will see it coming],” Bokenkamp tells TVLine of the big reveal. “All I know is that the clues are all there, so I think this is less of a twist and more of a well-earned truth.”

For longtime viewers of the show, Bokenkamp is confident tonight’s season ender will provide a major payoff — even if it does set up some big questions for the recently announced sixth season.

“The story of the bones will definitely come to a close and be resolved in this week’s episode. We’re going to give the audience a very big answer — the biggest we’ve given to date and a truth we’ve been working toward for five years,” he teases. “What exactly that means for Season 6 is yet to be seen, but I can assure you the events of our season finale will set the stage for a super compelling story moving forward.” 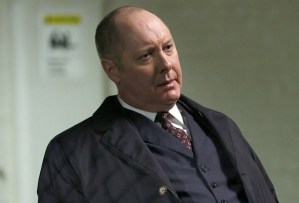 FAMILY MATTERS | According to Bokenkamp, Liz and Red’s relationship in the finale will be more adversarial than we’ve seen it before. “Red and Liz are on a collision course, and they both know it,” he says. “Reddington has flat-out told Liz the contents of that bag are none of her business. He’s not a man who is used to losing. And yet, Liz’s husband is dead because of those bones. Something has to give.”

Adds Boone: “It gets pretty tense, I’m not going to lie to you. It’s an arms race, as well as a race to the finish line, to get those bones.”

GONE GIRL | Last we saw Red’s other daughter, Jennifer, she demanded that Red leave her alone, for good — and Bokenkamp confirms that Red will continue honoring that wish in the finale. “Jennifer made it very clear she never wanted to see her father again,” he says.

‘TIL DEATH DO US PART | Last week’s installment ended with a sweet bedside proposal from Aram to Samar, who is still clinging to life after her harrowing abduction and near-drowning. But Bokenkamp warns viewers not to get too caught up in those warm and fuzzies.

“We’ve killed off a number of beloved characters on our show: Mr. Kaplan, Tom, Meera Malik,” he hints. “That storyline, what happens with Samar — you just have to tune in to see where that goes.” (With reporting by Matt Webb Mitovich)

Your hopes for tonight’s Blacklist finale? Drop ’em in a comment below.