To paraphrase Se7en‘s Det. David Mills: “What’s in the bag?!”

It’s a question that The Blacklist viewers have hoped to get answered for a full year, ever since Mr. Kaplan dug up a mysterious suitcase before jumping to her death in last May’s finale. (At some point, the suitcase became a duffel bag, because The Blacklist is nothing if not practical.)

We’ve known for a year that the duffel bag contains human bones, but the identity of the poor skeleton inside it has been kept a secret — just the way Red wanted. But on Wednesday’s Season 5 ender, we finally learned to whom those bones belong: Raymond Reddington.

That is, the real Raymond Reddington, who has apparently been dead for 30 years. I have no idea who James Spader has really been playing all this time, but it ain’t Red — a truth Liz now knows herself.

Let’s back up: Wednesday’s finale finds both Liz and Red — or is it “Red”? — in pursuit of Sutton Ross, a blacklister who received the duffel bag of bones from Ian Garvey in Costa Rica. Decades ago, Sutton had got into some serious legal trouble, and it seems Reddington is to blame for that mess. Now, 30 years later, Sutton plans to get his revenge by exposing the secret in that duffel bag to the very people Red wants to keep in the dark.

Liz and the FBI team get to Sutton first, and when they bring him in for interrogation, he requests that only Liz speak with him, provided she also cuts the audio and video feeds to the room. “Because I’ve looked in the bag,” Sutton says, when Liz asks why she should meet any of his demands. “You may want to sit, Agent Keen.”

At first, it seems Liz makes a very bad decision by sitting down: Not long into the interrogation, Sutton gets the upper hand and takes Liz hostage, persuading her team all the while to help him exit the FBI building unscathed. We don’t see Sutton and Liz again until later, when Red arrives at the warehouse where his daughter is being tortured and agrees to trade his own life for Liz’s. Sutton agrees — but only if Red gives him the truth first. 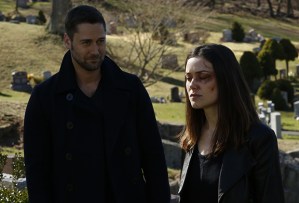 “Perhaps her life isn’t worth your revealing your precious secret,” Sutton taunts. “After all, what is she to you, really?” And just as Red is about to spill all the skeletal beans — “The truth? The truth is I am not…,” he begins — the FBI bursts into the warehouse, interrupting whatever secret Red was about to divulge. They arrest Sutton, but Red shoots and kills the man on his way out of the warehouse, duffel bag in hand, at last.

So, yes, it would seem that Liz’s choice to sit with Sutton in that interrogation room was a bad one, seeing as she didn’t get her hands on the duffel bag after all that effort. Turns out, though, that sitting down was the best decision she’s ever made. In the final minutes of the episode, Liz visits Tom’s grave, where she’s visited by a vision of her late husband. “This time, I have a secret, too,” she tells Tom.

That’s when Liz explains, from her perspective, how her entire plan unfurled perfectly that afternoon. Sure, she didn’t procure the duffel bag. But Sutton did tell her the truth about those bones when he was being interrogated, and he wanted to prove to Liz that Red was keeping a massive secret from her. Everything that followed — the kidnapping, the torture — was all an act, designed to lure Red to that warehouse and make him think he was getting away with his big secret. Even Jennifer made a return appearance, showing up at the warehouse and presenting her half-sister with the stunning DNA results, which Jennifer had previously learned.

As we watched a memory-jogging montage of all the people who have died trying to expose Red’s secret for the last five years — RIP, Diane Fowler! RIP, Naomi Hyland! — Liz finally confirmed the long-awaited identity of those bones.

Tom warns his wife to be careful, and she assures him she’ll have help on her mission to take down Reddington: It’s Jennifer, who meets Liz at Tom’s grave and asks if she’s ready. “Oh, yeah. I’m ready,” Liz responds, and the women leave the cemetery together.

Red, meanwhile, pays a visit to Liz’s grandfather, Dominic. As Red burns every last bone in that bag, Dominic reminds him, “She may not know your secret, but she knows you’ve got one. She’s never gonna let it go.” (Well, he’s half-right, at least.)

OK, your turn. What did you think of The Blacklist‘s season finale? Did the identity of the bones surprise you? Grade the episode in our poll below, then hit the comments with your reactions!