Six seasons in, The Americans‘ resident hard-liner Elizabeth Jennings is finally starting to have doubts about her homeland. But is it too late to stop now?

She explodes on Philip when he confesses that he’s been reporting back to Oleg about her missions for several months now. (The general she met in Mexico, he explains, is part of the anti-Gorbachev faction Oleg warned Philip about.) She tells her husband to “go to hell,” and bristles when he says, “I was trying to get you to be a human being about this…” She fires back: “You don’t think I’m a human being?” And the rest of the episode, it seems, is Elizabeth wrestling with that question in her own mind. Has she become so dedicated to the Soviet cause that she’s lost her humanity? 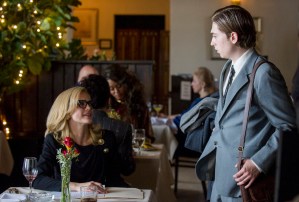 Elizabeth continues working that young film geek Jackson, dangling a fake management-training program in front of him to trick him into writing a detailed report of everything he saw interning for Senator Sam Nunn. (She expertly seduces him, too, “accidentally” leaving a pair of underwear lying around in her hotel room to entice him.) But when she asks him to stash a box of documents in a Defense Department meeting room so she can listen in via a bug, he catches on, and confronts her, threatening to go to the police. She insists it’s “not a big deal” while driving him to an abandoned alley, and we get the feeling Jackson isn’t long for this world. But even though he can’t promise not to blab, she lets him go with a stern warning — very unlike the Elizabeth we know.

She also checks in on Erica the artist, who’s taken a turn for the worse. Glenn tried to humanely end her life by giving her an overdose of morphine, but she’s still barely clinging to life. He blames himself for spending too much time at work… and even told his bosses he’s done working with the Russians for now. (You can just see Elizabeth’s face fall when he says this.) Once Glenn says his goodbyes and leaves the room, Elizabeth ends Erica’s life by (gruesomely) sticking a paintbrush down her throat to suffocate her. A grateful Glenn offers her one of Erica’s paintings as a thank-you, and she agrees to take the big one of an anguished woman’s face we’ve seen her eyeing for weeks. But after some hesitation, she ends up torching the painting in her basement. She knows she can’t leave a trace. 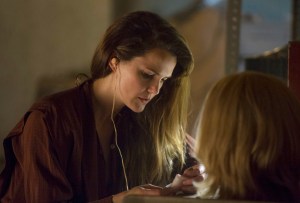 That bug that Jackson unwittingly planted did work: Elizabeth listens in to the Soviet negotiator Nesterenko and reports back to Claudia that he didn’t say anything suspicious. Doesn’t matter: Claudia says Elizabeth has to kill the guy, in the next two days. Elizabeth isn’t convinced, and even though she tracks Nesterenko and has the perfect opportunity to kill him, she stops herself. She later tells Claudia she couldn’t kill him because he doesn’t seem like a traitor. Claudia’s reply: “It needs to be done, whether you’re convinced or not.” But why, Elizabeth asks? “This time,” she demands, “I need to know.”

Claudia reveals that she (and, by extension, Elizabeth) are part of the anti-Gorbachev faction: She laments that Gorbachev has no sense of Russian history, and “he’s giving it all away” to the Americans. But after Elizabeth kills Nesterenko, they’ll alter her reports to make it look like he was betraying the country on Gorbachev’s behalf, hoping to incite a coup and push Gorbachev out of power. The veil — or Iron Curtain, rather — has been lifted from Elizabeth’s eyes. When she gets home, she tells Philip to deliver a message to Oleg: “What he’s worried about is happening.” 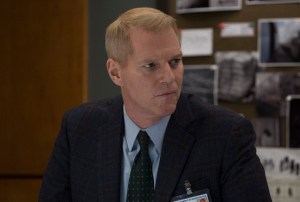 Elsewhere in “The Summit”:

* Stan continued sniffing around his neighbors, though he still hasn’t quite put it together. The police sketches of Philip and Elizabeth through the years all look so different, they’re not sure they’re the same people. (The wigs worked!) But he gets a big clue when he tracks down a guy who worked with Gregory, that KGB operative from Season 1, and asks about the woman Gregory worked with. The guy doesn’t recognize Elizabeth from a photo… but he does remember that the woman “smoked like a chimney.” A-ha!

* Not much Paige this week. Guess she was busy filling out her application for an internship at the State Department.

* Speaking of spies infiltrating the U.S. government: Renee got an interview for a job in the FBI’s personnel department. Stan said they’ll ask her “if you’re a loyal American, and if you can keep a secret.” Well, one out of two ain’t bad.

* Did anyone else think at first that Elizabeth stuck that paintbrush down Erica’s throat to get her to vomit up the morphine so she could keep living, and maybe Glenn could go back to working with the Russians?

* Philip visited Stavos, and apologized again for having to let him go. But Stavos dropped a bomb on him: “Whatever was going on in the back room, I never called the police.” (!!) He promised never to tell… but is Philip going to have to murder his old buddy to keep him quiet?