Shadowhunters on Tuesday showed all other television shows exactly how a finale is supposed to be done — and it wasn’t even the end of the season!

Before we start picking the showrunners’ brains, here’s a quick recap: Clary avoided execution by agreeing to revive Valentine and make him spill the Lilith-flavored tea, only things got a little out of control, forcing Clary to kill her father… again.

Meanwhile, Heidi — at Lilith’s behest — held Simon’s family hostage and manipulated him into feeding on his own sister. And just when things couldn’t get more heartbreaking, Simon compelled his mother into thinking he was dead before collapsing in Izzy’s arms.

Then came the big moment at Lilith HQ: Clary and Simon teamed up to stop the greater demon from reviving Jonathan (which they couldn’t!), resulting in an explosion that left no trace of Lilith or Clary and her brother. Jace — now free of Lilith’s compulsion, thanks to Magnus trading his magic to his father — arrived on the scene just in time for Simon, who believes his mark was to blame, to tell him, “Clary’s dead. I killed her.”

Before you start worrying too much, executive producer Todd Slavkin confirms to TVLine that “Kat McNamara is coming back to the show. Without ruining it, the fact that Jonathan’s hand grabbed her from that coffin means something moving forward. She wasn’t alone when she ran across that room. And Lilith did a whole lot to bring back Jonathan; the arm proved that it worked — and that he’s alive.” 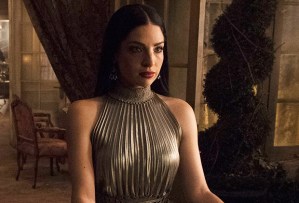 As for the fates of Lilith and Jonathan, Slavkin reminds us, “You can never kill a greater demon, You can only banish them back to Edom, so Lilith is not gone. In fact, you’ll see her again. But the poor thing is stuck in Edom, and she’s not too happy about that.”

Book readers already know what an important role Jonathan plays moving forward, so it’s no surprise that he’ll also be back. “We’re totally excited about [Jonathan’s return],” Slavkin adds. “And it’s the real Jonathan with the real DNA he was born with. It’s not going back to 2B and seeing that dynamic.”

For Katherine McNamara‘s take on the explosive finale, check out our video interview at the top of this story. For more of the showrunners’ thoughts — as well as a taste of what’s to come in Season 3B — read on:

TVLINE | OK, let’s talk about Valentine, who I never thought I’d see again. What inspired his return?
SLAVKIN | We always loved Alan Van Sprang as an actor, and knowing that we were doing a supernatural show, a character dying doesn’t mean you never see the actor again. In the books, Clary draws a rune to bring back the dead, so it just clicked — what an amazing opportunity to combine these two ideas and have her bring back her father, the father she killed, to get this vital information. And for her to be on the verge of execution, for this rune to be a last-ditch effort to both staying alive and saving the world, and how it goes horribly wrong and backfires in the most vicious, awesome way … makes it such a poignant moment. We loved the combination of horror and heartbreak; it seems to be a recipe for Shadowhunter feels.

TVLINE | Does that mean we can hope to see him again in the future?
DARREN SWIMMER | I think that possibility is always out there. His body is incinerated now, so Clary wouldn’t be able to use that same method to bring him back again. We don’t have any direct plans to bring him back, but hey, this is Shadowhunters.

TVLINE | Moving onto more romantic topics, Izzy was there for Simon when he needed her — and Maia was not. Will this bring them closer together?
SWIMMER | It might. There’s definitely a contingency of people out there in the Twitterverse that are excited to see where those two might be headed.
SLAVKIN | I would go so far as to say this is the season of “Sizzy.” In 3B, we really explore their relationship in a way we haven’t yet. “Sizzy” fans worldwide will unite and be really pleased. Again, it’s about patience and the slow burn, but it’s burning brighter. Their friendship is so special. In [this finale], she saw Simon at his lowest point in that waiting room scene. The way he collapses into her arms just broke our hearts. It was his great acting, but it was also their chemistry.

TVLINE | I was surprised Simon convinced his mom that he died, rather than just to forget he’s a vampire. That was extreme.
SWIMMER | Well, he tried that before, and it didn’t work out well. He knew he’d have to break things off for the long run or else they’d just arrive back at the same situation. There’s also a bit of truth to it, because he technically already is dead.
SLAVKIN | If he has the Mark of Cain, he could kill his mom, so this was really one of the most selfless acts. Nobody gains anything, but it has to be done for her safety and mental health. There was no other way out. We always knew that 3A would involve him discovering that he really can’t be normal if he’s going to be in the Shadow World.

TVLINE | Speaking of parental drama, I’m really intrigued by Asmodeus. Will he play a larger role in 3B?
SWIMMER | You’ll definitely be seeing more of Asmodeus. He’s not in every single episode, but he’ll definitely make appearances at key moments.
SLAVKIN | We’ve explored Magnus’ backstory a little bit. We know his birth mother committed suicide when he was a child, but there’s a whole other part after that, which he haven’t explored yet. We hint about it in the finale. … But it’s still Magnus’ father, so there’s this love between them. Even though there’s repulsion and anger and all this unresolved stuff, that love doesn’t go away. As writers, we dig into that. Just because you’re a Prince of Hell, that doesn’t mean you can’t love your son.

TVLINE | I’m surprised it took Luke’s superiors this long to start questioning him. Are his days as a cop numbered?
SLAVKIN | He struggles through this in 3B. It doesn’t just go away. He really is under investigation. The NYPD aren’t dummies. A roof exploded! We don’t want to give it away, but it’s an incredible journey that our alpha werewolf goes on. It’s a real metamorphosis. He’s at his lowest point and refuses to believe Clary is really gone. He’s somewhat haunted by it.

TVLINE | While we’re talking wolves, Alisha Wainwright told me that Maia has a great storyline in 3B. Anything you can tease?
SLAVKIN | It’s great. The Jordan storyline had to be all about Jordan, but when Maia comes back in 3B, we get to really see what’s going on at the Jade Wolf — the pack politics. She’s forced to step up in a way she never thought she was capable of. She’s someone who has always chosen to run away when things get difficult. Alisha Wainwright is so good. We are constantly amazed by her stuff, and she comes back in a really cool way that fans will dig.

TVLINE | Lastly, might Clary’s death bring Jace and Simon closer together?
SWIMMER | They’re not the only ones experiencing that grief, so it won’t necessarily be a Jace-and-Simon story, but you will see pairings of characters you don’t normally see in dealing with their grief.
SLAVKIN | I think Jace and Simon probably feel it the most in that moment, but Clary was so meaningful to so many people. Imagine Luke and Alec and Izzy — everyone is rocked to their core.

Your thoughts on Shadowhunters‘ Season 3B finale? Grade the episode below, then drop a comment with your full review. (P.S. We’ll share more scoop, including that of the “Malec” variety, later this week.)