While watching Monday’s season finale of The Resident, you may have exhibited any or all of the following symptoms: increased heart rate, abnormally high blood pressure, a sudden lump in your throat and/or the desire to yell, “Finally!” at your TV screen.

The Fox drama wrapped its freshman year with a tense, highly entertaining hour, which had a little something for everyone. A season-long villain finally getting her comeuppance? Check! A highly risky surgery with a happy ending? Check! A steamy makeout sesh for Conrad and Nic? Check, check and check.

Before you tell us what you thought of the finale, let’s recap the major events:

THE HEART WANTS WHAT IT WANTS | Despite her insistence that she doesn’t get romantically involved with patients, it seems Mina has done just that. She’s started sleeping with Micah, the heart transplant recipient we’ve seen a few times this season. She’s adamant that it’s just sex, he insists they’ve got a real connection… but the debate comes to an abrupt and scary end when Micah’s body suddenly tenses up, and he’s barely able to speak.

Mina rushes him to Chastain Park Memorial, where she uses the vague term “exertion!” to describe what Micah was doing just before his symptoms appeared. Naturally, Mina fools absolutely no one. It’s clear that she and Micah were having an X-rated slumber party before the hypertension hit, and when the docs discover that Micah has an aortic dissection — a complication of his heart transplant that was likely made worse by “exertion” (wink, wink) — Mina is overcome with guilt. The good news? Surgery can be done to fix the tear in Micah’s chest. The bad news? The survival rate for this procedure is not promising, especially for a patient who only just recovered from getting a new ticker. The doctors tell Mina that only a surgeon “with an ego the size of Texas” would attempt such a risky operation. Fortunately, she knows someone at Chastain who fits that exact description.

Enter Dr. AJ Austin (recurring guest star Malcolm-Jamal Warner), who is as arrogant as ever when Mina asks him to perform the surgery — but he agrees to do so, and what follows is one of the season’s most nerve-wracking sequences. I’m not sure which part was most compelling to watch: the careful cutting of scar tissue around Micah’s heart, Dr. Austin’s brutally honest pep talk for Mina (in which he ascertained Mina’s feelings for Micah, and urged her to “use that passion to elevate your art”) or the scary, scary moment when it didn’t seem as if Micah’s heart would restart again.

Fortunately, with the help of three shocks to Micah’s most vital organ, he survives the procedure, and he wakes up later to find a tearful Mina at his bedside. “See? I was right,” he jokes. “I told you we were a thing.” 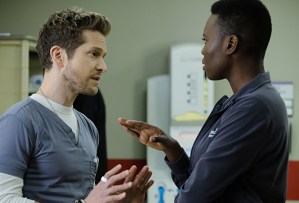 NOT-SO-SMOOTH CRIMINAL | Over on Law & Order: The Resident, a jailed Nic frets to Conrad that she’s been charged with breaking and entering at Dr. Hunter’s clinic — a felony that could end her nursing career for good, should she be convicted. But Conrad, desperate to help his friend/coworker/ex/also maybe current girlfriend?, isn’t above asking for a big favor. He calls his father and asks the man to front 10 percent of Nic’s bail; Marshall does his son one better and pays the entire $100,000 sum, then gives Conrad a creepy spiel about wanting a fresh start for their relationship. We’ll get back to that.

Later, Devon reluctantly visits with Olivia Tan, a hypochondriac patient who’s visited Chastain more than a few times with no actual symptoms. This time, she insists she has a rash and a persistent cough, and after running down a list of completely insane ideas (a rat-contaminated soda can!), Olivia asks if she might be having a reaction to chemotherapy. She just went through her first round of treatment, after all — because Dr. Hunter diagnosed her with lymphoma. Even though she has zero cancer markers. At all.

Devon is stunned by Olivia’s diagnosis, and he takes her case to Conrad and Nic, who are more certain than ever that Lane is committing insurance fraud — not only with sick patients, but apparently with perfectly healthy ones. They (finally!) go to Randolph and present their evidence of Lane’s criminal behavior, informing him that they’ve called the FBI, and it won’t be long before agents get a warrant to search Lane’s clinic. Randolph (finally!) questions Lane about what she’s been up to, and she tearfully half-confesses to her poor treatment of patients.

And even though Randolph pretends to be on Lane’s side, urging her to go to her clinic that night and burn any records that might be incriminating, he’s actually setting her up to be caught by the FBI when she rushes out of her clinic with a box full of paperwork. Lane is (finally!) arrested, and the look on her face when she realizes Randolph is responsible? Cold. As. Ice.

Once the news of Lane’s arrest reaches the community — and Conrad and Nic celebrate their legal victory with a quick makeout session in a spare room — Randolph does damage control, maintaining at a press conference that Chastain Park had no idea what Lane was up to at her clinic. The potential PR disaster is settled quickly, for the most part, and Randolph is riding high on kudos from his colleagues… until he’s introduced to the new chair of the hospital’s board: Conrad’s father, Marshall Winthrop.

“It’s time to get the hospital on a firm financial footing,” Marshall warns Randolph — and the only person who looks more stunned than Dr. Bell is Conrad, who watches from the hallway as his father takes over a board meeting.

OK, your turn. What did you think of The Resident‘s season finale? Grade the episode in our poll below, then hit the comments with your thoughts!