Even if Black Bolt were the talkative sort, this news would probably render him speechless: TVLine has learned that ABC has cancelled Marvel’s Inhumans after only one season — eight episodes, to be exact. 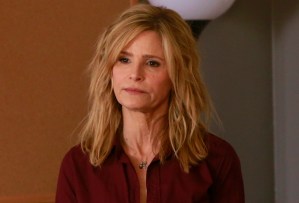 Similarly, the Kyra Sedgwick-led Ten Days in the Valley, which burned off more than half its 10-episode run on Saturday nights over the winter, has been officially terminated.

Marvel’s Inhumans, which began and ended its short run this past fall, brought to the screen the Royal Family of a comic-book race called the Inhumans. Anson Mount (who’s since been cast as Star Trek: Discovery’s Captain Christopher Pike) headed up the clan as Black Bolt, the king whose voice could wreak havoc if he so much as whispered.

A whole lotta hoopla surrounded the show initially, as its first two episodes unspooled in IMAX theatres back in September. But after averaging 2.65 million viewers and an 0.6 rating for most of its run, it dipped to 1.95 mil and an 0.5 for its last two episodes — ever, it turned out.