Since Season 8 of The Walking Dead not only killed off Chandler Riggs’ Carl and Steven Ogg’s Simon but banished Austin Amelio’s Dwight and sent Lennie James’ Morgan over to spinoff Fear the Walking Dead, there’s room for some fresh blood to be pumped into the core cast. So ahead of Season 9, the AMC drama has promoted to series-regular status Avi Nash and Callan McAuliffe, per The Hollywood Reporter. 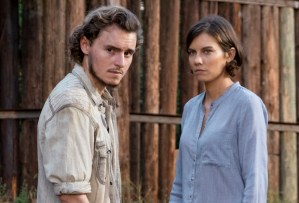 Nash plays Siddiq, the medical resident that Carl was escorting back to Alexandria when he was bitten by a walker. (Heaven knows the AHK alliance needed a new doctor, too, what with the brothers Carson having met untimely ends.) McAuliffe is Alden, the former Savior whose shows of solidarity with the Hilltop eventually won over that community’s skeptical leader, Maggie. Both actors made their TWD debuts in the recently-concluded Season 8.

So, what do you think of the show’s decision to promote the duo? Is there anyone you’d have preferred to see upgraded in their place?