NBC is beefing up its slate for next season with a pair of new dramas, handing out series orders to The Enemy Within and The Village, TVLine has learned.

The Enemy Within, billed as a “fast-paced, spy-hunting thriller,” stars Dexter alum Jennifer Carpenter as former CIA operative Erica Shepherd, who’s serving life in prison for betraying her country. She is recruited by FBI agent Will Keaton (Rosewood‘s Morris Chestnut) to “help track down a fiercely dangerous and elusive criminal she knows all too well.” The supporting cast includes Raza Jaffrey (Code Black, Homeland) and Kelli Garner (Pan Am); Ken Woodruff (Gotham, The Mentalist) will write and serve as an executive producer. 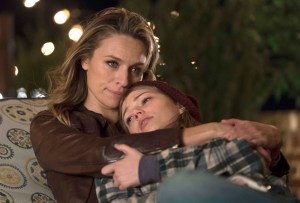 The Village centers on a Brooklyn apartment building that houses a diverse group of residents — a single mom who works as a nurse, a war veteran, an undocumented immigrant protecting her son from ICE — that’s more like a family. The ensemble cast include Michaela McManus (SEAL Team), Moran Atias (The Resident, Tyrant), Warren Christie (Chicago Fire), Daren Kagasoff (The Secret Life of the American Teenager), Dominic Chianese (The Sopranos) and Lorraine Toussaint (Orange Is the New Black). Mike Daniels (Shades of Blue, The Brave) will write and serve as an EP.

These two join the Ryan Eggold medical drama New Amsterdam, which earned a series pick-up last week, on NBC’s roster for the 2018-19 TV season. The full slate will be unveiled at NBC’s upfront presentation next Monday.

Which new drama sounds more your speed: The Enemy Within, or The Village? Hit the comments and share your pick.