Before we replay how the Time Team helped a young Agent Christopher during Sunday’s Timeless, can we talk about that episode-ending bombshell?

After returning from the mission, Wyatt learns that Jessica’s sick brother survived in this timeline. Naturally, Wyatt is suspicious of how that’s possible — his wife says something about stem cells — and who paid for the treatment. He then asks Jessica if there’s something she’s not telling him, to which she replies, “Yeah, there is. I’m pregnant.” What?! Assuming she’s telling the truth, isn’t the Wyatt/Jessica/Lucy triangle complicated enough without adding this twist to it? Or do you think she’s lying to distract Wyatt from her sleeper agent ways? 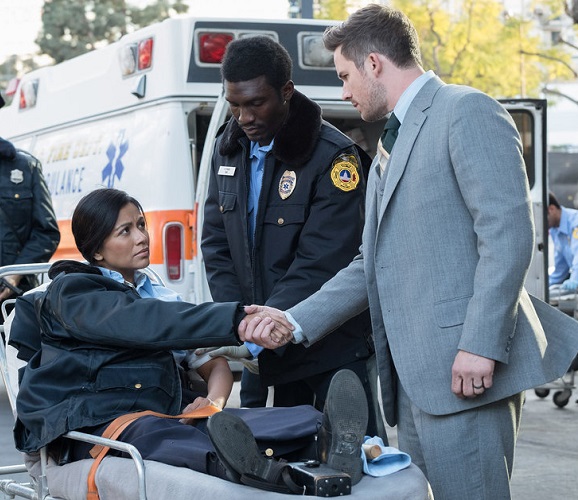 OK, back to the mission: The team thinks they’re headed to March 30, 1981 because it’s the day Ronald Reagan was shot, but it’s actually young  police officer Denise Christopher (Once Upon a Time’s Karen David) who is in need of saving. Rittenhouse wants to take out the rookie because without her, there would be no Time Team. On their first attempt to shoot her, Wyatt pushes Denise out of the bullet’s path, but the team’s work is hardly done. It turns out Denise’s life is at stake in more ways than one.

Young Denise comes from a conservative Indian family, which expects her to quit her dangerous job and settle down with a future doctor. Needless to say, her mother doesn’t know she’s gay. Enter Cagney and Lacey, aka Jiya and Lucy, who try to convince her not to go through with the arranged marriage. After their pep talk fails — Denise mistakes Lucy’s questioning about her sexuality for flirting — Lucy and Jiya go with Plan B: They show her the flash drive Agent Christopher gave to Lucy in case her family ever disappears. Amazed by what the future holds for her, Denise tells her mother the truth just as another Rittenhouse agent tries to take her out. But Wyatt thwarts this one, too, by running him over with a car. Wyatt: 2. Rittenhouse: 0 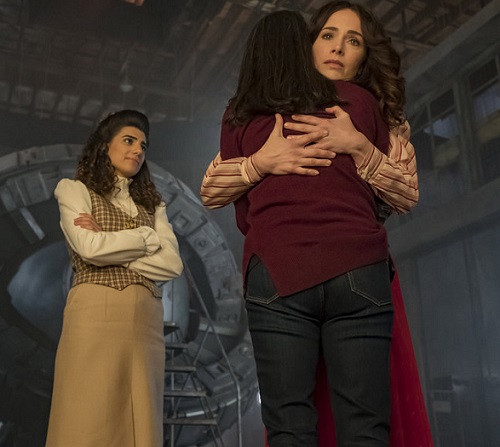 Back at the silo, the team steps out of the lifeboat to find a smiling Agent Christopher, who tells Wyatt that she’s been waiting 37 years to thank him for saving her life not once, but twice. Then she gives the flash drive back to Lucy and reveals that “Cagney and Lacey” gave her back more than just her life. Although mother and daughter had their rough patches, Christopher’s mom eventually came around and now loves her grandkids, whom she previously didn’t even know existed.

Perhaps inspired by Christopher’s words that knowing what was waiting for her gave her hope, Lucy confronts Flynn about the journal. He explains that two weeks after his family was killed, Lucy — about five years older than she is now, but still looking good, he notes — approached him at a bar while he was drowning his sorrows. She told him there was a way to stop Rittenhouse, and that he would need her help to do it, before handing over the notebook. “Lucy, you started all of it,” he says.

* When Jiya volunteers to take the lifeboat’s fourth seat for this trip, Rufus supports the decision. After all, they’re going to need another pilot once he’s dead, he grimly reasons. (Plus, Mason and Flynn, who are already alive in 1981, have too much “life experience” to go on the mission.) Rufus then proceeds to push Jiya away until he realizes he wants to spend whatever time he has left with his girlfriend. But that’s not good enough for Jiya. Instead of accepting her vision, she wants to try to stop it. “I’m so in love with you,” Rufus responds. 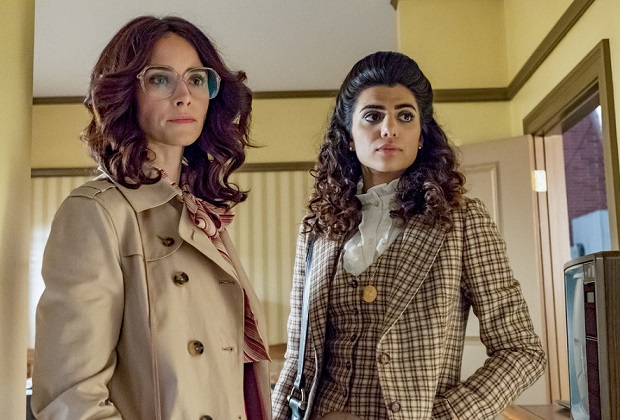 * Time-hopping Jiya is fun. She comes up with the Cagney and Lacey names — when Lucy notes that the show premieres later that year, Jiya simply says she likes to live on the edge — and loads up on ’80s legwarmers, blue eyeshadow and more.

* That one sleeper Wyatt and Rufus captured sure gave up easily, didn’t he? He begged the pair to kill him, as long as his wife and kids in 2018 remained safe, before ultimately hanging himself. As Wyatt pointed out, the sleepers are victims of Rittenhouse, too.

Timeless fans, what did you think of Jessica’s baby news?