The Last Man on Earth remains very much on the bubble. Did Sunday’s Season 4 finale prepare viewers for its potential demise? In a word, no.

The episode begins immediately where we left off. Tandy and Mike return, only to discover the rest of the gang are packed and up ready to get far, far away from Zihuatanejo. After a brief memorial for the “raging carnival of horrors” they’ve called a home (as you’ll recall, the house was found to contain 75 bags of cocaine, 23 sticks of dynamite, 16 grenades, 82 normal guns, 36 scary guns and 5 severed heads), they hit the open road and journey towards Cancun. Jasper, meanwhile, decides to stay back; Melissa respects his decision, and leaves him a self-driving car with coordinates to their intended location.

With a limited food supply, the gang pulls over in Tapachula, where Mike and Tandy last encountered goats. Everyone’s excited to find orange and avocado trees as far as the eye can see, but the herd they stopped for is nowhere in sight. The Brothers Miller set off by foot in hopes of wrangling the livestock, but instead come across an empty house similar to the one that once belonged to their grandmother. They return to tell the group they’ve found shelter, then Tandy insists they stay put until the goats come back.

Afterwards, Tandy takes Clancy out for a walk and returns to the vacant homestead, where the robot dog’s battery suddenly dies. When Tandy attempts to give his animatronic friend a proper burial, he’s approached by an actual living dog; it’s the first he’s seen since the virus wiped out civilization. It barks at Clancy’s taxidermic head, then runs off. 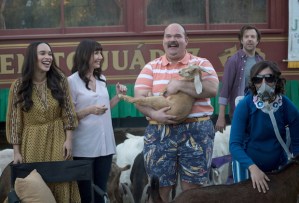 Tandy returns the following morning to good news: the goats have returned, and the survivors can resume their journey. They set off on the open road again, but pull over almost immediately. Mike spots the stray dog Tandy encountered, then Tandy exits the truck and runs back towards the burial he dug for Clancy. The survivors follow him there, where they discover the man-child digging himself a grave. It’s his way of saying he wants to set down roots in Tapachula. He thinks it’s a mistake to set their sights on Cancun, where the beaches will be littered with dead bodies and stores will be picked clean of fundamental supplies.

“There’s an expiration date on the way we’ve been living,” Tandy argues, “and that date has passed.”

Everyone agrees to stay put, before all partaking in a group hug. The only holdout is Mike, who longs to find other survivors and, in turn, potential companionship. Tandy knows his brother wants more than their makeshift family can offer, so he hands him the keys to the cab and sets him on his way. As a parting gift, he cuts off his rattail and tapes it to Mike’s neck so he’ll never truly be alone. It’s disgusting, but heartwarming all the same.

After Mike leaves, the gang prepares to set up shelter. Everyone’s especially excited… until a new threat emerges. Tandy steps outside to find everyone surrounded by the masked dwellers we first saw exit the underground bunker in the penultimate episode. “Oh, farts!” he exclaims, then the scene cuts to black. The… end?

And that’s it, folks! What could very well be the last Last Man ever has come to an end. Grade the finale via the following poll, then hit the comments with your hopes for a potential Season 5.