“You think you know what happened; you don’t,” Fear the Walking Dead’s Strand warned Al in Sunday’s haunting — and haunted — episode. And, more and more, the AMC drama was giving us the feeling that we didn’t know what had happened at the baseball diamond, either. So, read on, and not only will we go over the new clues that were dropped, but we’ll usher Nick back down the path toward his own demise and reveal whether your guesses about John’s lost love “Laura” were correct. 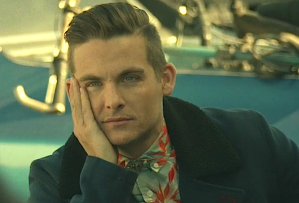 ‘THIS IS FAR TOO SIGNIFICANT A CONDIMENT FOR CATTLE-FEED PANCAKES’ | Early on in “Buried,” Lucy told Al during one of the interviews that punctuated the hour that there had been a day when they could have stopped all this from happening. It had been about two weeks after the Vultures had begun nesting in the diamond’s parking lot, and since our protagonists had been reduced to using cattle feed to stretch their rations, various pairings (Nick and Lucy, Alicia and Naomi, and Strand and Cole) were going on runs. That, Lucy said, had been their first mistake. While they were gone, Madison reiterated to Mel her offer to take in the Vultures. In response, he explained that he and brother Ennis used to live with a few other families on a cattle ranch up in hill country. It had been a good set-up… until the wildfires flared up. Madison assumed that, while everyone else had decided to stay, Mel and Ennis had fled. Only that wasn’t the case at all. Mel had convinced his loved ones not to leave, and that had been so the wrong call that “I could hear them dying,” he said, “screaming as we drove off.” 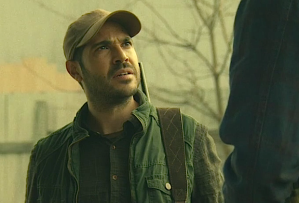 ‘THERE’S FAMINE ON OUR HORIZON’ | After Strand and Cole found at a nursery some plants that were at least vaguely edible — and survived an attack by walkers covered in cactus spines — Victor at last admitted that he did indeed like his handsome suitor, he was just reluctant to open up. “I’ve done things,” he said ominously, showing Cole the rock — a souvenir of the dam? — that he carried around to remind him of the kind of man that he didn’t want to become again. Unfortunately, the kind of man that he did want to become was apparently a selfish bastard. He next took Cole to a parking lot to show him a getaway car that he’d been filling with supplies since the diamond’s crops started failing. If Cole ran away with him, this “insurance policy” would buy them a month, Strand said, adding, “You want to get to know me? This is me.” But Cole, upright to the core, rejected the indecent proposal that they abandon Madison & Co., and drove himself back to the diamond. 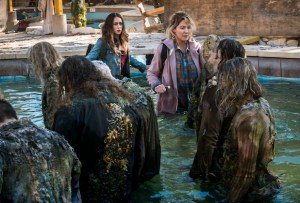 ‘THAT’S WORSE THAN BAND-AIDS IN THE WATER’ | Meanwhile, Alicia and Naomi scavenged at a water park, where survivors had apparently lived until the fences gave way, letting in the undead without tickets. And I sincerely hope you either watched this episode or will go back and watch it, because no words I could type here — or even this picture — could possibly do justice to the grody spectacle of a swimming pool full of zombies. Anyway, after climbing up a water slide to reach the higher ground to which the last of the park’s former occupants had fled — and sliding back down along with a piece of machine gun — Alicia let Naomi distract her with binoculars while she quietly snuck out. Too bad for Naomi, the truck she’d planned to use to hit the road ran out of gas after going… about a foot. That’s the “second time you ran out on me since we met,” Alicia noted. She wasn’t pissed, exactly, but she did need to know whether Naomi was with them or not. “I just can’t do it,” Naomi said. OK, then, Alicia replied. She hoped Naomi would eventually change her mind, but whether or not she did, Alicia would help gas up the truck. 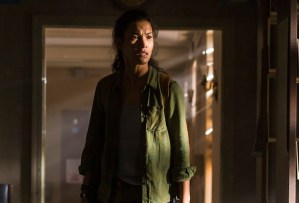 ‘I NEVER SHOULD HAVE OPENED THAT BOOK’ | On Nick and Lucy’s run, he took her to… hmm, not exactly the best-known canned-goods hotspot in the world: the library. But as he pulled off of the wall an inspirational poster right out of the Sue Heck Collection, he explained to his girlfriend that he was determined to find some books to build a library at the diamond. They had to give people a reason to stick around, he argued. It couldn’t just be about food. (Before books, I might have chased after Eugene’s go-to — wine — but that may just be me.) Anyway, it took Lucy all of about half a second to realize that what Nick really wanted to do was give Charlie a reason to stick around. And perhaps, she added, what they should really be doing was thinking of where to go next, to start over in a new place with new crops. Proffering a map of the Southwestern states, she said, “First page we open to, that’s where we take everyone.” Except, once the map had suggested a spot to the north, Nick came up with an idea that was totally different from and in fact the opposite of uprooting the diamond dwellers. 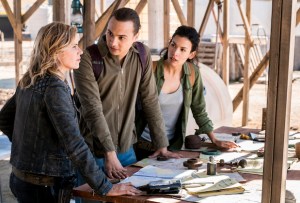 ‘YOU GOT SCHNOOKERED’ | Gradually, it became clear to Al as well as us that “that day” had been so significant because it had been the one on which Lucy, Alicia and Strand had all decided to give up on the stadium and leave — and they all felt like s— about it. Still, in our flashbacks, Strand didn’t drive off with his hatchback full of supplies, he returned to the diamond having gotten “a little reminder of what I stood to lose.” In spite of Naomi’s belief that the diamond wasn’t going to last, she went back with Alicia and dedicated herself to building up an infirmary with the medical supplies they’d scored. And when Nick and Lucy got home, he excitedly spelled out his new plan for his mom: They’d go on one run, out further than the Vultures would’ve gone, and come back with seeds, fertilizer… everything they’d need to start over right where they were. It was at about that point in the backstory that in present day, Alicia & Co. had Al pull over to (cough) bury Nick. What his sister, Strand and Lucy really wanted was to dig up a cache of weapons and stuff — they were going to go after the Vultures. 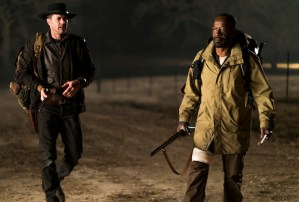 ‘SNIFF BEFORE YOU BITE’ | Though Al was ticked that she’d been fed her passengers’ story between two slices of bulls—, she couldn’t help but be tempted when Alicia suggested that she give them a ride to the spot where the Vultures would be meeting up next. “You wanna know how this ends?” Strand said. “Come see it for yourself.” Once Al decided that yes, she’d give them a lift to see the story through to its conclusion, Nick was buried. (Sweetly, Morgan laid a bluebonnet on the grave.) As the group packed up to set off, John saw among their belongings a backpack that had been his Laura’s. Turned out, the woman with a gun identical to his was Naomi! She was Laura! And according to Alicia, when things went south at the stadium, she hadn’t made it out. Hoping to recruit more muscle for their assault against the Vultures, Alicia told John, “They did this,” and implored him to “help us end it.” But the kindly gunslinger was reeling. He wasn’t going anywhere. And though Morgan had intended to strike out on his own again after burying Nick, he hung back to be with his accidental friend while Al took off with Alicia, Strand and Lucy.

So, what did you think of “Buried”? The undead water park? The big Laura reveal? And how hard was it to see Nick so enthusiastic and full of life a week after we watched him die? Hit the comments.