Timeless takes on its most personal mission yet this Sunday (NBC, 10/9c).

When the Time Team travels to the day Ronald Reagan was shot in 1981, Lucy & Co. discover that what’s at stake is not the life of the president, but that of their boss, Agent Christopher.

“They realize that one of the young police officers who was at the Reagan event is, in fact, a very young Agent Christopher [played by Once Upon a Time‘s Karen David],” executive producer Arika Lisanne Mittman previewed during TVLine’s set visit. “Rittenhouse is trying to take her out because without her, there’s no team. Without her, all sorts of things come apart in the history of our show. So they’ve realized she’s a smart target to go after.”

Young Denise is also at a “major crossroads in her life,” Mittman added. In the early ’80s, the rookie officer “wasn’t out yet,” Sakina Jaffrey, who plays the adult Agent Christopher, noted during a break from filming. “She came from a traditional Indian family. Her parents were doctors, and the father came [to America] with very little money and made it here. She basically was trying to follow through on what her parents would’ve liked her to do and sublimated all those feelings of attraction towards the other sex. It was ’81, so it wasn’t easy in any family, and certainly in an Indian community, it was harder.”

With Denise about to enter into an arranged marriage to a man, Lucy and Jiya — who gets in on the time-hopping action this week — plead with her, “‘Don’t take that path. Don’t take the path that’s going to make you unhappy in your life. It’s not good for you. It’s not good for the guy who’s supposed to marry you,'” Jaffrey described. “It’s a really beautiful moment.” 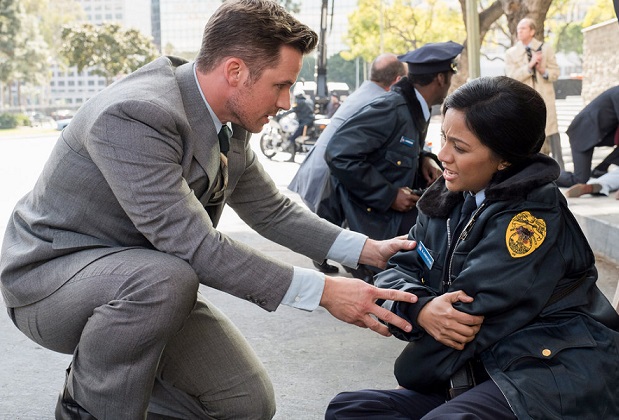 As Denise grapples with her sexuality, Rittenhouse sets its sights on the future Homeland Security agent. Lucky for her, she’s got a time-traveler looking out for her safety. “Wyatt knocks her out of the way and saves her, but she’s grazed by a bullet, and it sets her life just a little bit off-kilter,” Mittman teased. As for the hero soldier, his interaction with Denise sheds light on “the importance of Wyatt and why he’s part of the team,” star Matt Lanter said, likening the hour to an “origin story.”

Meanwhile, on top of protecting history (and Agent Christopher’s herstory), Rufus and Jiya have to contend with their own set of problems. “[They] are coming to a head over [her] visions and what they mean, and how true they may be,” actor Malcolm Barrett shared. As a result, the ominous premonitions are “creating tension with Rufus and Jiya, and that culminates in this episode.”

Adding to the strain between the couple, Jiya gets to go on this week’s mission because her beau might not live to pilot the lifeboat in the future, as seen in the exclusive sneak peek below. “They don’t know what’s going to happen to [Rufus], [so] she may as well start coming on missions,” actress Claudia Doumit explained. “She’s not particularly excited about it because of the situation. The last thing you want to hear is that the reason you’re going to go back in time and do the thing that you want to do, that you’ve been training for, is because your boyfriend might not be around much longer to do that job.”

But Jiya is excited about all the ’80s goodies she shoplifted during the time trip. “I never met a security tag I couldn’t deactivate,” she declares in the following video before listing all her swiped merch. Press PLAY to watch the scene, then hit the comments with your thoughts on the team’s latest adventure.