Arrow went to court this week, as Oliver Queen faced charges of conning his constituency by moonlighting (and sometimes taking lives) as Green Arrow. Was a “new” archer able to take the bull’s-eye off Oliver’s back?

Oliver was feeling good heading into the fast-tracked trial, though his attorney feared the worse, seeing as how the judge was in Diaz’s pocket and the outside counsel was quite the hired gun. As friends and frenemies took the stand, Diggle held up well, the team’s go-to hospital doc them a solid, but Dinah’s murder of Sean Sonus tainted her testimony.

Rene meanwhile got spooked by seeing Diaz accompany his daughter into the courtroom, and fingered Oliver as the Green Arrow. Next, Felicity’s avowal that she’d know if her husband was a superhero was compromised by the fact that she didn’t know her father was The Calculator.

Oliver himself then went to testify — to say he knows the Green Arrow, but won’t out him — only to be cut short by the arrival of… Green Arrow! Who revealed himself to be Tommy Merlyn?! Who testified that he faked his death after The Undertaking, and suspects Rene was pressured into IDing the wrong guy. Alas, that stunt was not enough to make the judge dismiss the case, and the trial forged ahead, ultimately hinging on Laurel Lance’s testimony. And though Diaz had ordered his cohort to give the performance of a lifetime, Laurel actually named Tommy! Even so, the jury returned a guilty verdict… which Judge McGarvey then overturned via JNOV! As we then learned, the judge, like “Tommy Merlyn,” was the handiwork of master of disguise Christopher Chance/Human Target.

Afterward, Oliver visited Rene to thank him for the “judge swap” idea, and to make amends for everything that went down between them. Laurel meanwhile aimed to take out Diaz, but was stopped from sonic crying him to death by the dampener in his pocket. Diaz then declared that, having failed to discredit Oliver, he is moving to Plan B: killing him and everyone he cares about. 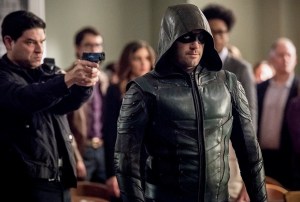 TVLINE | Each time Arrow calls about bringing you back, is your first question pretty much always, “How?”
Pretty much, especially this last time. I mean, how many different ways can you bring somebody back without actually bringing them back to life? He’s an alternate universe version of himself. He’s a hallucination. He’s a flashback version. Basically, the things that they’ve left out are Lazarus Pitting him or, like, a stable version of himself that doesn’t want to take a cyanide capsule when he’s captured.

TVLINE | What opportunities did this version of Tommy afford you as an actor?
One of the nice things about this was how the timing worked out. We had just finished this season of Chicago Med, I came back to New York to go to my wife’s opening of [Broadway’s] Frozen, and then I flew out [to Vancouver] the Monday after that. Putting on the suit is just totally rad. I mean, the Prometheus suit was really fun, but to put on the Green Arrow suit, it’s awesome.

TVLINE | I wondered, did they make one just for you, or did you wear Stephen’s?
I’m not sure whose I wore, but they brought me in a couple of days early so they would have time to…

TVLINE | Or do they “take in” David Ramsey’s?
Please, no. You could fit two of me in there, I think!

The other thing that was really cool about this particular episode was being able to play, like, Classic Tommy. The courtroom scene started off very serious, but once the cameras turn around, you get to play a little bit more. The director, Andi Armaganian, was wonderful. She basically said, “Go as far as you want with being Tommy.” I was like, “OK, sure,” and as soon as I did it, she came back after that take and said, “You have no idea how hard all of us were grinning back at the monitors,” because it was this reminder of this character that a lot of people fell in love with from the very beginning of the series. I was having a blast being back anyways, but to be able to really call back that persona of the guy who stood up against three bodyguards who were going to basically kick the s–t out his best friend, that was fun. It was nice to be able to live in that skin for a bit.

TVLINE | Did you spend any time studying Wil Traval, for when “Human Target” Christopher Chance breaks character?
I did. I actually went back and watched the episode that he previously appeared in, in Season 5. There’s only one little moment at the very end, in the parking garage, but it did call for a bit of a shift in mannerisms, and he speaks a little differently than I do, so I wanted to try to get that down. But the next day was really fun because the two of us were inside of a tent in the same costume, and they were walking us back and forth between the tent and a van in giant NFL football covers and umbrellas [for secrecy]. Wil’s a great guy and it was a blast to be able to do that.

I also used a fake name at the airport to try to keep it under wraps, and my trailer said “Guest 44″…. It was fun to be able to let the cat out of the bag a little bit before the episode aired, to get some excitement.

TVLINE | I heard that in the original draft of the script, it didn’t specify “Tommy” as the Green Arrow that crashes through the ceiling, that the producers were actually mulling a list of options, while they checked on your availability.
I believe it.

TVLINE | And I think Stephen said something at a recent fan event about Justin Hartley (This Is Us, Smallville) almost appearing on the show. I have to wonder if maybe he was one of the options to be the Green Arrow who interrupts the trial.
That would’ve been bonkers.

TVLINE | How would you next like to come back?
I honestly don’t know. I texted Beth Schwartz after she got promoted to showrunner for next season and I said, “So, you’re figuring out ways to bring Tommy back next season, right?” She said they’re always looking for ways. I think it’s amazing that Beth is taking over. Like, to be there from the very beginning and to now be running the show…. it couldn’t be in better hands.

TVLINE | Maybe the Laurel that Katie Cassidy is currently playing could run over to Earth-Two and bring over that Tommy? And maybe he’s, like, a total nerd or something, a science geek in glasses and a bow tie….
I love it.

TVLINE | Lastly, turning to your role on Chicago Med: the producers told us that in the season finale, there’s a “big” “professional thing” coming up for Connor and Ava. What do you want to say about that?
In these last episodes of the season, we’ve been watching the conjoined twins surgery progress, and in the episode that airs next Tuesday, Connor is really thrown for a loop. And when the season finale ends [on May 15], you’re going to be wondering where Connor stands, and what his fate is at Chicago Med.

TVLINE | Look at you, in a medical show cliffhanger.
Trust me.