With the TV landscape absolutely flooded with reboots and revivals right now, I wouldn’t blame you for raising a skeptical eyebrow in the direction of Cobra Kai, the new Karate Kid sequel series debuting today on YouTube Red. But patience, Daniel-san: Based on the two episodes I’ve seen, what seems at first like a cheap cash grab is actually a fresh, funny spin on the well-established Karate Kid formula, as well as a surprisingly heartfelt and nuanced look at the immense power the past can hold over us. 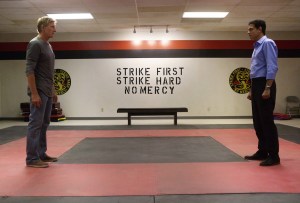 To be fair, I am precisely the target audience for Cobra Kai: I am a child of the ’80s, and grew up obsessively rewatching the Karate Kid movies. (Well, the first two, anyway.) So just the sight of a bonsai tree or that iconic All Valley Karate Championship bracket is enough to fire up the pleasure center in my brain. But to Cobra Kai‘s credit, it doesn’t just coast on easy nostalgia. It actually examines it, and reconsiders the characters we know so well in a way that makes this more than just an elongated Jimmy Fallon reunion sketch.

The premiere opens with a flashback of the climactic fight from the original Karate Kid film, with underdog Daniel LaRusso (Ralph Macchio) crane-kicking rich jerk Johnny Lawrence (William Zabka) in the face on his way to victory. But instead of celebrating with Daniel, we stay with Johnny, and Cobra Kai is the story of how that crushing defeat went on to affect his entire life. Three decades later, Johnny is a loser: living alone, perpetually hung over and working thankless odd jobs as a handyman, mounting flat-screen TVs for grumpy housewives. Meanwhile, Daniel is a success, overseeing a vast car dealership empire with billboards that trade on his karate fame… and taunt Johnny everywhere he goes. (Would locals really remember who won a random teen karate tournament back in the ’80s? Eh, never mind.) 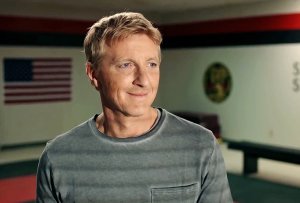 It’s an inspired twist to make Johnny the hero this time — albeit one predicted by Barney Stinson on How I Met Your Mother — and Zabka rises to the occasion. He’s best remembered as the blonde villain from ’80s movies, but he’s endearingly gruff here, as Johnny dusts himself off and claws his way towards something resembling self-respect. (When Daniel mentions his old karate tournament win, Johnny quickly fires back, “It was an illegal kick,” like it’s a mantra he’s been repeating to himself for years.) It’s not easy to get us to sympathize with a prototypical bad dude like Johnny Lawrence, but Cobra Kai pulls it off, thanks to Zabka’s prickly charm.

Johnny is inspired to clean up his act when the new kid in his building, Miguel (Parenthood‘s Xolo Maridueña), asks him for some karate tips. After Johnny defends Miguel from a pack of teen bullies — straining his middle-aged groin in the process — he decides to reopen his old Cobra Kai dojo to teach Miguel and his fellow outcasts “a style of fighting your p—y generation desperately needs.” (Johnny gets a little gleefully anti-PC at times, but at least Miguel is there to warn him when he starts “genderizing.”)

It’s all a lot of fun, with co-creators Jon Hurwitz and Hayden Schlossberg (the Harold and Kumar series) and Josh Heald (Hot Tub Time Machine) peppering in lots of clever nods to the original films. (Daniel gives every car buyer a complimentary bonsai tree.) But it’s more than just a comfort-food serving of nostalgia; it’s about nostalgia. Johnny is clearly stuck in the past: still driving his beat-up old Pontiac Firebird, listening to hair metal and watching macho action movies at night. Cobra Kai takes an earnest look at why Johnny was never able to move on from that traumatic tournament loss — and how he might begin to start building a new future for himself.

The series does falter a bit when it moves away from Johnny and Daniel: The second episode spends more time with Miguel, who shares a high school with Daniel’s teen daughter (of course), and all the trite talk of nerds and mean girls feels like it’s from a forgettable teen soap. But the foundation of Cobra Kai is solid: Not only does it deliver on the ’80s retro fun we expect — yes, Johnny and Daniel do face off across a karate mat once again — but it goes beyond that, forcing us to grapple with exactly why we want to see Johnny and Daniel face off again so badly. After all, in the karate tournament of life, Father Time always comes out on top.

THE TVLINE BOTTOM LINE: Smart and poignant, Cobra Kai is more than just a fun kick of nostalgia, with a winning performance from William Zabka.