“I’m sorry I’m late, your Honor. I had some business to take care of.”

With those words, spoken by a presumed-missing witness, the trial of Arrow‘s Oliver Queen is poised to take a turn — one of many, as the CW series this Thursday threatens to unmask Star City’s friendly neighborhood vigilante once and for all. And with a possible life sentence at play. 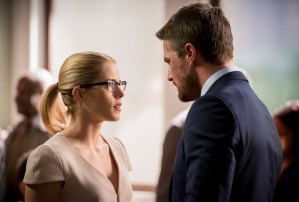 “Things are tense, things are pressured,” Emily Bett Rickards, who plays Felicity, said of the courtroom vibe during TVLine’s visit to the show’s Vancouver set last month. “We’re pulling the best Margulies we can,” she quipped, with a nod to another Good Wife.

Oliver of course has dodged this particular arrow on multiple prior occasions, but this time the deck is stacked against him, thanks to a fast-tracked court date and a judicial system that is not immune to the influence of Ricardo Diaz. “You definitely see Diaz putting his finger on the scale in some ways, and you see us pushing back in some ways,” said Echo Kellum, who plays Curtis.

There’s also the none-too-small fact that Oliver is, you know, guilty of leading this sometimes-deadly double life. (“He has murdered people; there’s no way around that,” Rickards noted.) Even so, series lead Stephen Amell previewed, “Oliver’s confidence level is pretty high, based off a plan that has been hatched.” As Rickards put it: “There are definitely a couple of Plan Bs in place that are about to explode….”

Might one of those “explosive” ideas involve the Emerald Archer who is spied in promos crashing through the courtroom skylight, played by former cast member Colin Donnell? Amell was mum on what brings back his “very good friend,” other than to say, “This gives [Colin] something to chew on, which will be pretty cool to see.” David Ramsey, who plays Diggle, meanwhile enthused, “Colin was with us in the beginning, another one that just fit right into this family, so it’s always good to get him back.”

Also filed under explosive: volatile testimony could come forth during the trial — possibly from those with whom Oliver has previously fought crime but currently is estranged. 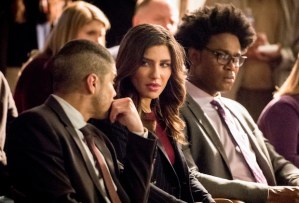 “There are definitely one or two curveballs” to be lobbed from the witness stand, hinted Juliana Harkavy, who plays Dinah. Kellum echoed that sentiment, observing with a chuckle, “Any witnesses in Star City you should be worried about, point-blank.”

Amid all this uncertainty, there is one former team member you can count on. “As much as Oliver and I fight, I still love him, he still loves me,” Ramsey shared, in character. “So I’m trying to find a way to get him out of this damn thing!”

The wildest card in the court’s extremely stacked deck may be Laurel Lance, whom we know to be from Earth-Two (and a bit eeeevil), while the people of Star City believe she is interim mayor Quentin Lance’s once-“dead” daughter. As she takes the stand in dramatic fashion, “There are going to be a lot of questions hanging, lingering…,” teased portrayer Katie Cassidy. “We never know what she’s going to do, and that’s fun. I love her candor.” 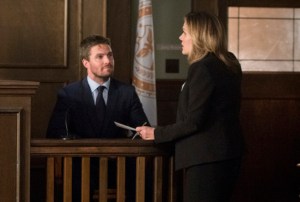 Hmmm…. Multiple Plan Bs not withstanding, is Oliver prepared for a scenario that nonetheless finds him guilty and thrown behind bars? “There is, importantly, a backup plan in place for Felicity and William in the event that he is sent to prison,” Amell shared. “It’s not as though he’s simply going to leave them in Star City when it’s being overrun by a criminal enterprise.”

Regardless of the trial’s outcome, the late-in-season episode has itself been found “guilty” of one thing — giving Arrow‘s entire cast a rare opportunity to all hang out on set. Sharing the secret to enduring long courtroom scenes, Ramsey said, “It’s really just the cast, because everybody really gets along, and that’s no joke. This is the best time, when we all get to work together.”

For the viewers, meanwhile, Kellum put it best: “It should be a fun, Law & Order-esque Arrow!”