This week on Chicago Fire, Severide’s former flame Renée (played by Sarah Shahi) blazes into the firehouse, seeking the lieutenant’s professional help… and possibly something more? 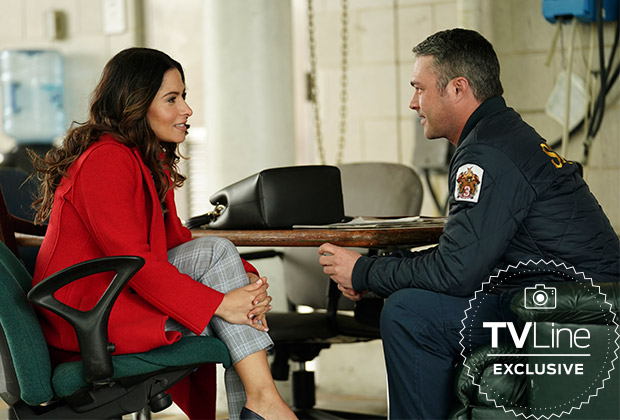 “She comes back because she has a legal case that involves a refinery where some firefighters were hurt, and she’s trying to get better safety regulations, but also win a settlement for these injured firefighters,” executive producer Derek Haas tells TVLine. That leads the lawyer to ask Severide if he’ll be her ruggedly handsome, jury-swaying expert, as seen above in our exclusive sneak peek at Thursday’s installment (NBC, 10/9c).

“Whether or not she has ulterior motives, you can determine over the course of these [final Season 6] episodes, but it is a professional reason why she comes,” Haas adds. If you’re still wondering if there’s even the tiniest chance of a romantic reunion, it should be noted that Renée has settled down in Chicago with her almost five-year-old son. “It’s just me and him,” she tells Severide. Translation: She’s single.

Although the firefighter initially seems hesitant to help with the case, he’ll eventually get on board and even take to Renée’s little boy. “There’s going to be this kind of Jerry Maguire thing,” Haas previews. “Severide bonds with [her son], and this couldn’t happen at a more inopportune time for Stella and her relationship with Kelly.”

Needless to say, after getting the 411 on her beau’s past romance, Stella is “not happy at all” that his ex has resurfaced. “She’s definitely looking at [Renée] with suspicion,” Haas says.

Press PLAY above to watch the sneak peek, then hit the comments with your thoughts on Renée’s intentions.