Given what happens in the big-screen blockbuster Avengers: Infinity War, you’d think that the MCU’s most direct TV offshoot, Marvel’s Agents of S.H.I.E.L.D., would “half” to follow suit. But will it? Can it?

Having caught Infinity War on Saturday night — and after doing way too much global time zone conversion math — here’s what I am thinking….(Again, movie spoilers will be discussed.)

CAN S.H.I.E.L.D. COMPLETELY IGNORE INFINITY WAR?
Completely? Nope — because in the April 27 episode, titled “Option Two,” Mack’s friend Tony Caine (aka Candy Man) already made a fleeting reference to “all the weird stuff happening in New York,” when he met up with Daisy. So while those in the Lighthouse who had been sealed off from the outside world were oblivious to any breaking news reports, make no mistake — a donut-shaped spaceship and its occupants were making mayhem in the Big Apple.

CAN S.H.I.E.L.D. PARTLY IGNORE INFINITY WAR?
This is a possible middle ground to play with, though many would cry “cop-out” if the TV series acknowledged the events of Infinity War but conveeeeeeniently spared half of its own ensemble from the movie’s very final twist. (To recap: half of the galaxy’s inhabitants — including Avengers members/allies Scarlet Witch, Black Panther, Star Lord, Doctor Strange, Winter Soldier and Spider-Man — were turned to dust by a snap of Thanos’ fingers, moments after he added the sixth and final Infinity Stone to his mighty gauntlet.)

Instead, a more likely approach for S.H.I.E.L.D. may be….

CAN S.H.I.E.L.D. ‘POSTPONE’ ITS OWN DEATH TOLL?
This is where I broke out the abacus. Based on where and when Avengers: Infinity War‘s Earth-bound storytelling begins (New York City, early morning)… where/when we first saw Vision/Scarlet Witch (Edinburgh, nighttime)… and where/when the final battle takes place (Wakanda, at a time when it’s both light out in East Africa and in New York, where Nick Fury and Maria Hill witnessed the effects of the galactic genocide), I have guesstimated that the movie’s timeline spans a little over 24 hours. But since it was night (in the United States, I will boldly venture) when Candy Man referenced “the weird stuff happening in New York,” at least half of that time has already passed on S.H.I.E.L.D.

All of which is a geeky way of saying: Though Coulson & Co, with the Lighthouse’s power/communications/phone lines now restored, will become aware of what is going on with the Avengers, we still have about 12 hours until half of all life in the universe ends. And with only three episodes remaining, Season 5’s storyline could wrap itself up before half the characters turn to ash. (Annnnnd… cue season finale credits!)

But Agents of S.H.I.E.L.D. suffering its own Thanos-related losses is a sticky wicket unto itself…. 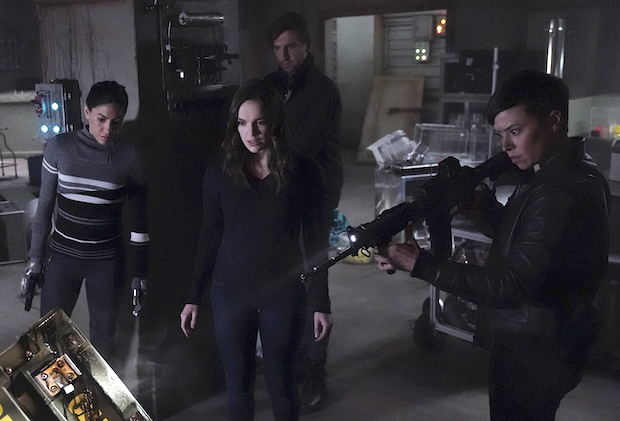 WHY ARE S.H.I.E.L.D. DEATHS A PROBLEM?
Optimistically assuming that at least some of what Thanos wrought will be undone when Avengers 4 hits theaters in May 2019 — presumably with a big thanks to Captain Marvel, whom a perimortem Fury signaled for in the movie’s bonus scene — any S.H.I.E.L.D. deaths would have to stick for most of any possible Season 6.

Granted, that isn’t so huge a deal if the TV series conveniently “dusts” off second-stringers such as Piper, Davis and Kim for every Coulson, May and Simmons it spares. But that’s still an ambitious swing for a TV offshoot that, save for dovetailing with Captain America: Winter Soldier late in Season 1, has operated very independently of the MCU. Plus — and again, assuming renewal! — it’d then have to commit to bringing some/all of those characters back to life, if Avengers 4 does manage to undo any of the damage a little over a year from now.

There’s one final argument against S.H.I.E.L.D. suffering any synergistic, imminent loss of lives. In explaining how the low-rated drama’s Season 5 finale was being fashioned to possibly serve as a series finale, co-showrunner Jed Whedon told TVLine the episode would be “rewarding,” regardless of what role it ultimately serves. And it’s hard to imagine that positive-sounding adjective describing any scenario where the team has been slashed by half.

How do you think TV’s Agents of S.H.I.E.L.D. will (or won’t) incorporate the very final, very dark twist of Avengers: Infinity War?