Star Trek: Discovery is giving us a blast from the past next season… and we want to (boldly) go to there.

The freshman voyage of CBS All Access’ sci-fi series ended with the Discovery coming face-to-face with the iconic USS Enterprise, and a new behind-the-scenes teaser for Season 2 — which you can watch above — promises to deliver on that cliffhanger. Sadly, the teaser offers no new footage, but it is chock full of Easter eggs for Trek fans to crack open, so let’s go through it with a fine-toothed comb:

0:08: We hear Sonequa Martin-Green’s Burnham say, “Every moment is a test, and everywhere I turn, there’s fear,” as we catch a glimpse of a fear-inducing alien.

0:13: Who is that saying, “I’m responsible for 203 lives… I’m tired of deciding which mission is too risky, and which isn’t, and who lives, and who dies”? It’s none other than Christopher Pike, the pre-Kirk captain of the Enterprise played by Jeffrey Hunter in the original Trek series. (Hell on Wheels star Anson Mount will play Pike in Season 2 of Discovery.) And doesn’t it look like that costume designer is fashioning a classic golden Starfleet uniform?

0:22: Ahhh, Spock! We hear Leonard Nimoy from the original series warning that “insufficient facts always invite danger, Captain,” from Season 1’s “Space Seed.” And we know that Spock was part of Pike’s Enterprise crew, and we know that Burnham’s surrogate dad Sarek is Spock’s father… no one has been officially cast yet to play Spock on Discovery, but this hint makes it all the more likely we’ll see those pointy ears at some point in Season 2.

0:36: As we watch more sets and costumes being built, we catch a peek at the new (old) Enterprise uniforms — along with insignias with the curling “E”-shaped line inside that indicates Engineering: 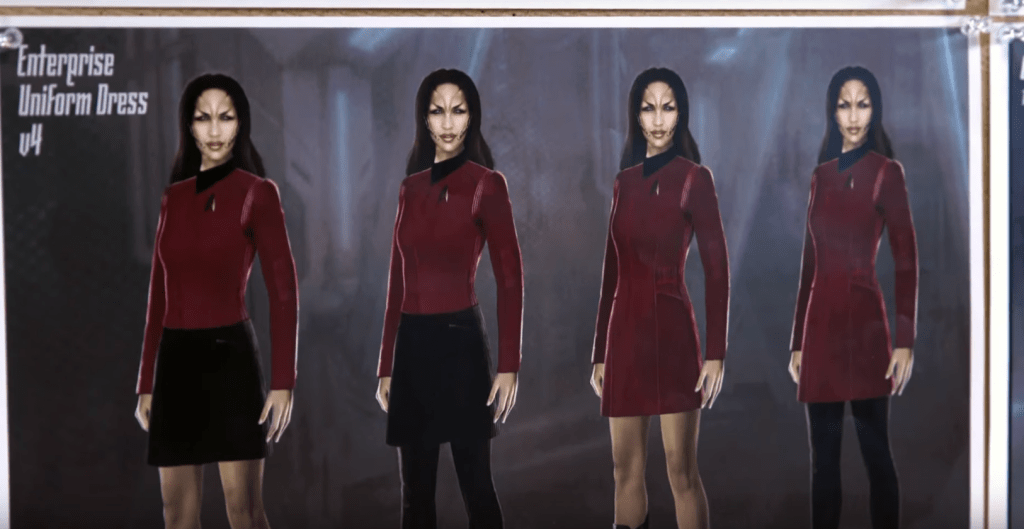 0:40: More Spock: “You speak about the objective hardness of the Vulcan heart, yet how little room there seems to be in yours,” from Season 2’s “The Immunity Syndrome.” Sounds like Burnham will at least have someone to share her complaints with about growing up Vulcan.

0:49: The teaser ends with Martin-Green walking through a door on set as we hear Burnham say, “I’m responsible for forging my own path… we all are.”

Press PLAY above for a sneak peek at Season 2 of Discovery, then hit the comments with your early predictions.