Suits‘ Season 7B finale on Wednesday gave new meaning to “patience is a virtue,” because there was nary a mention of Mike and Rachel’s much-anticipated wedding until well into the second hour. But before the couple even got hitched, they received an interesting offer that would pave the way for the departures of original cast members Patrick J. Adams and Meghan Markle.

In the midst of a class-action lawsuit with his former clinic colleagues, Mike is approached by another lawyer, Andy Forsyth, who is starting a firm in Seattle that only takes on big corporations on behalf of the little guy. And wouldn’t you know it, he wants Mike — and Rachel — to run it. When things with his case go south, Mike thinks Andy is responsible and almost sabotages his chance at the gig. Thankfully, he has a smart soon-to-be wife who visits Andy and comes back with a pretty good argument for accepting the job: They’re young and don’t have kids yet, Rachel points out to her fiancé, so “if we’re ever going to do something like this, now is the time.”

But what about the long-delayed wedding? Mike vetoes the idea of postponing it yet again. “I’ve wanted to marry you from the second I met you, and I’m tired of waiting,” he says. So instead, Rachel enlists miracle worker Donna’s help in moving up the affair to ASAP. The redhead, of course, pulls it off — maybe Donna should open an event-planning business on the side? — and the couple exchange vows in front of their loved ones:

Mike: From the first second I met you, I knew I wanted to be here with you someday, walking down the aisle, arm in arm.

Rachel: I know that I fought it at first, but now, Mike, I can’t imagine living alongside anyone else for the rest of my life.

Mike: If I’ve learned one thing, it’s that we never know what the future holds, and that can be a scary thing. But I know that there is nothing that I can’t handle when I have you by my side.

Rachel: You are the strongest man I have ever met, and you make me stronger. You’re the husband I’ve always wanted, and I can’t wait to begin our adventure together. 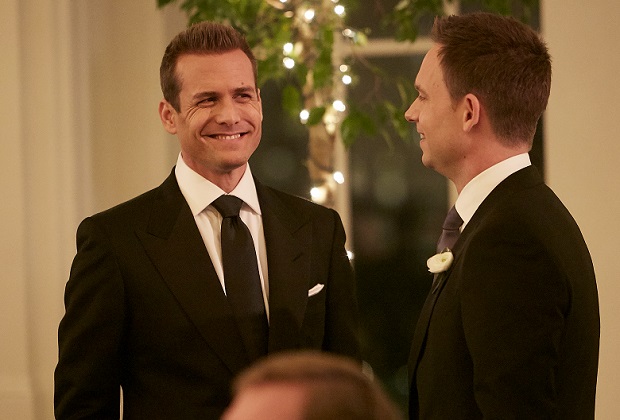 During the reception, Harvey tells Mike that he is ready to be a senior partner — but then Mike breaks the news that he and Rachel are leaving for Seattle in a couple days. “This is who I am,” Mike explains. “It’s who I’ve always been. It’s time, Harvey.” With that, they hug happily, and the era of Mike and Harvey’s bromance comes to an end.

Adding to an already eventful finale, Mike and Rachel’s swan song also doubled as a backdoor pilot for the upcoming Jessica-centric spinoff. After she loses her license to practice, the former Pearson Specter Litt partner calls upon Harvey to help her take on the city of Chicago, which is displacing residents for a new building project. The case has a personal connection for Jessica: Her aunt is one of the tenants. Jessica’s cousin thinks the lawyer is just using her relative, but Jessica — who grew up poor in the city for the first 10 years of her life — insists that she came back to reconnect with her family.

Meanwhile, Harvey and Jessica are constantly reminded that they’re not in New York City anymore by a shady man (Agents of S.H.I.E.L.D.‘s Simon Kassianides) who threatens Harvey at the airport, as well as the city’s lawyer Keri (The Mindy Project‘s Rebecca Rittenhouse). “This is Chicago. If you want to get something done, you’re going to need more than your Louboutins and your holier-than-thou attitude,” Keri tells Jessica. Cut to a brilliant shot of those infamous red soles walking.

It turns out the shady man is actually a cop who works for the shady mayor (Homeland‘s Morgan Spector), who offers Jessica a job, fixing things instead of making messes for him. The idea of being able to change things from the inside is tempting, but there’s a catch: Jessica has to drop the lawsuit… and she does! “I just hope that you’re the first person in the world who can lie down with dogs and not come up with fleas,” Jeff Malone — yay, they’re still together! — says.

Elsewhere in the season ender:

* In an effort to save the firm, Mike convinces Robert Zane to join Specter Litt along with 20 of his most loyal lawyers. (Could Katherine Heigl’s character be one of the underlings?) Zane has one demand, though: He wants his name up first on the wall. 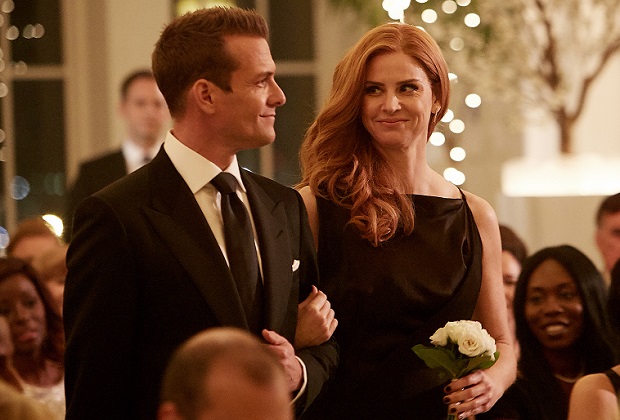 * Outside of a brief look and a dance at the wedding, there isn’t much movement on the “Darvey” front. But we do get yet another acknowledgement that everyone knows there’s something between Harvey and Donna except for Harvey and Donna. His ex Scottie resurfaces this week and asks Harvey if Donna had anything to do with his breakup with Paula. “Why do you ask?” he wonders, to which Scottie simply replies, “That’s all I needed to know.”

* Louis tells Mike that he’s been doing the right thing ever since he got to the firm and that the world could use a lot more people like him. Awww. #TheSofterSideofLouis

Suits fans, what did you think of the two-hour event? And will you tune into the Jessica spinoff based off the pilot? Chime in via the polls below!